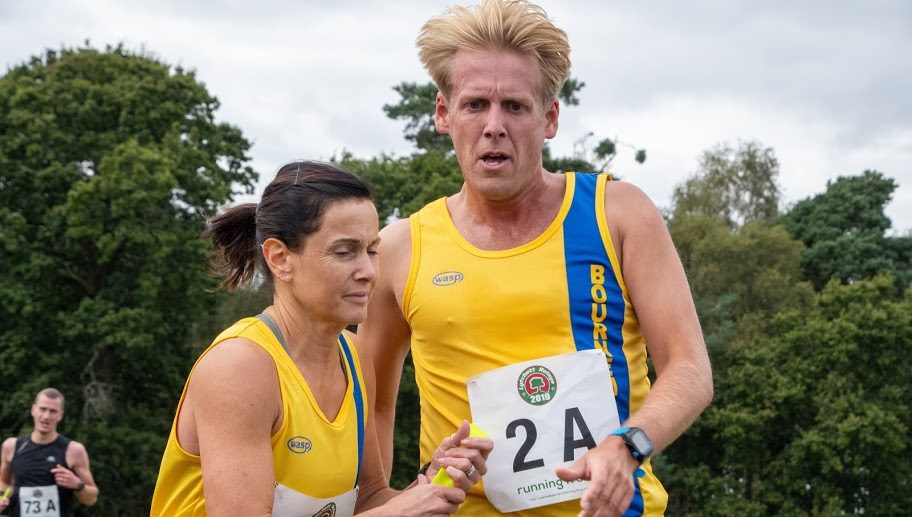 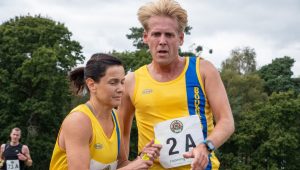 This year’s edition of the Lytchett Relays proved extremely popular with Bournemouth AC members with a whole host of them taking part across a wide range of different teams and combinations.

There were those of the Twemlow Anchors persuasion, with the training group featuring some of Dorset’s finest athletes putting out several teams capable of contending.

Then there were two mixed teams of Bournemouth AC traditionalists, organised by Kirsty Drewett. They were looking to pit their wits against 81 other teams made up of members from other clubs in the region and all sorts of others who had got together to give it a go.

It truly was a carnival atmosphere and the team spirit across the board was fantastic to see. No one was in it for themselves. Everyone was going out there and giving their best for each other and for the good of the team – and above all, for fun.

The premise of the event was for teams of five to battle it out with each member completing a 5km lap before passing the baton on to the next designated team member.

The times for each competitor would then be added together to give each team a cumulative time that would decide whereabouts they placed in the final standings. The teams were then split into categories of Mens, Ladies or Mixed.

The team that came out on top included two Bournemouth AC members, with Craig Palmer posting the quickest time of any athlete on the day and Rob McTaggart weighing in the 2nd fastest time overall. 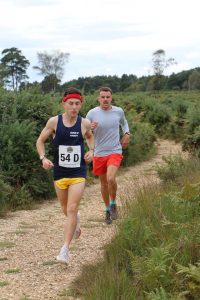 Originally it was Tag who had the course record, getting round in 15:53. He then passed the baton onto Craig who promptly eclipsed that time to finish in a highly impressive 15:47. Their team also had Lee Dempster of Lytchett Manor Striders who ran it in 16:31, Mark Smith of Poole AC who did it in 16:47 and Josh Smith of Poole AC who got round in 17:06. 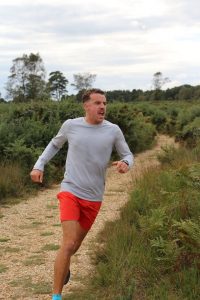 Craig blitzed it round in a time of 15:47 proving he’s in fantastic form 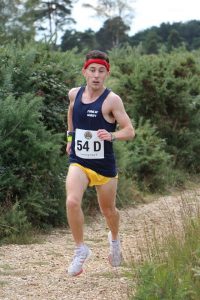 Tag was lightening quick in his leg, getting roung in 15:53

Next on the leaderboard it was another team of Twemlow Anchors loyalists including Paul Chapman who posted a time of 18:30, Chris Wood of Wimborne who got round in 16:51 and three Poole AC members, giving them a total combined time of 1:26:07. 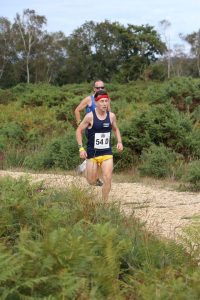 Steve Way was in the team that finished in 5th place and he completed the course in 17:44. He was joined by Steve Yates of Poole Runners and three more Poole AC members with Steve Cook making it a team of three Steves and messieurs Broadley and Jones giving them the two Daves.

Ant Clark was part of the team that took 6th place and it was good to see him back in action after the illness he contracted at in South Africa at the Comrades Marathon. Ant ran it in 18:49 and was joined by Pat Robbins who completed the course in 17:34. 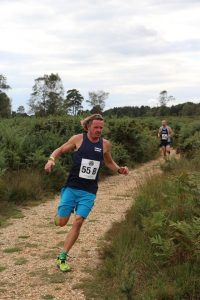 Pat Robbins ran well to complete his leg in a time of 17:34

Chris O’Brien also competed as part of the Verwood Runners Mens team who came in in 18th place overall. Chris got round in a time of 20:18 with his team securing a cumulative time of 1:45:53. 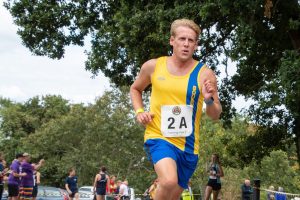 The first of the two mixed Bournemouth AC teams finished in 23rd place overall and were the 6th best mixed team. Their team included Phil Cherrett who ran a brilliant 5k PB time of 19:31. 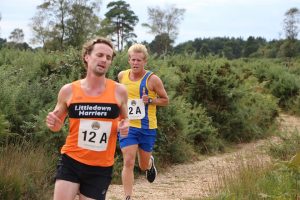 Simon Hearn had an excellent run, posting a time of 19:23 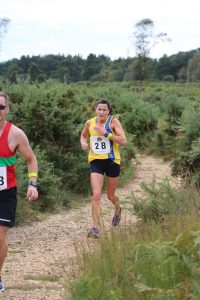 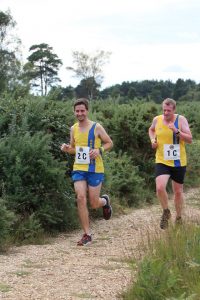 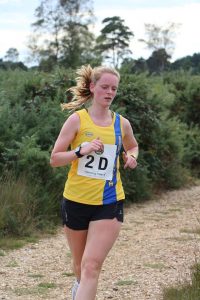 Katrina White took up the fourth leg for her team 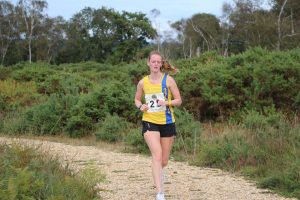 A decent run from Katrina saw her get round in 23:50

The other Bournemouth AC mixed team were positioned in 29th place overall and 10th mixed team. They did alright and proved they were up for fight, with Ian White, Sam White, Mike White, Joy Wright and Simon Hunt giving them bite. 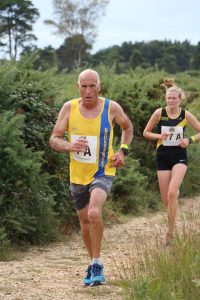 Simon Hunt was on the first leg for his BAC team 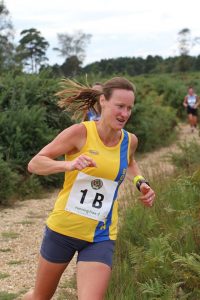 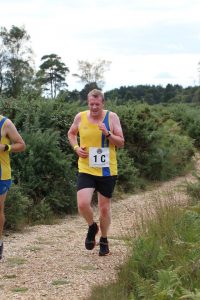 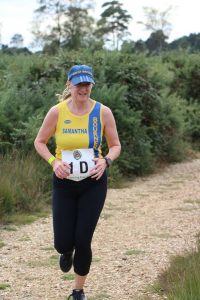 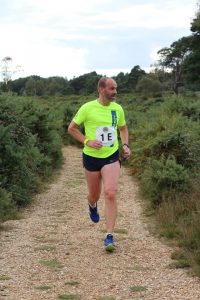 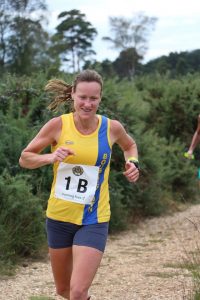 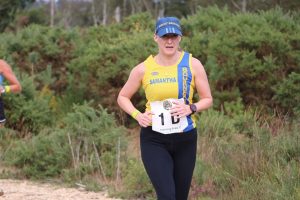 Finishing just behind the second mixed BAC team were the first placed all-ladies outfit, consisting of five Poole Runners. Gemma Oliver ran two legs for them, finishing in 21:20 and 21:39, with Paul Barker (22:15), Sarah Swift (22:19) and Joanna Westhead (23:25) completing the line up.

Joy demonstrates excellent form as she come in to complete her leg in 21:08 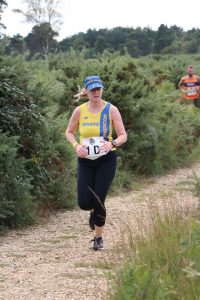 They finished with a cumulative time of 1:50:58 which was good enough to see off competition from a Lytchett Manor Striders ladies team (1:51:59 and Dorset Doddlers female five (1:52:35). 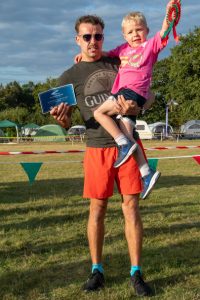 Craig picks up his prize for the fastest lap

It was great to see so many different members of the Dorset running community integrating with each other in a competitive but friendly environment, with some even putting aside club rivalry to join forces and work together. 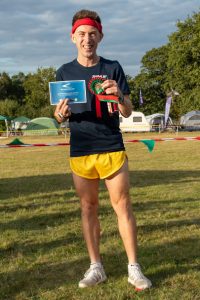 Everyone has their own personal reasons for running. For some it’s just simply to keep fit and stay in shape. For others it might be to improve and progress. Some people just like to be part of a united team and enjoy the camaraderie. One thing we have in common though is that ultimately, we do it for fun, and the Lytchett Relays certainly embody that sentiment. 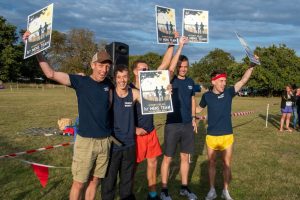