Majestic Maraud for Mark Hillier at Race to the King

Following his successful completion of the Marathon des Sables, Mark Hillier was back in action again at Race to the King

Less than three months ago Mark Hillier was in the Sahara Desert tackling the toughest footrace on Earth in the 254 km, 6 stage monstrosity known as the Marathon des Sables.

It was the biggest challenge of his life, having to complete huge distances of up to 86km every day in 120-degree heat whilst lugging everything you need for the duration of the journey. But he did it. And thankfully it hasn’t put him off running either and he’s already undertaken his next extreme endurance foray.

This time for Mark, it was the double marathon along the South Downs Way named Race to the King. The event is actually a two-day adventure where participants can run or walk 23.4 miles on day 1, camp out overnight and then complete the remaining 30.2 miles the following day. Or, there is the option to run the whole lot in one go. Since he clearly likes a challenge, Mark of course opted for the latter.

This time his aim wasn’t simply to complete the course though. He had a time goal of under 9 and a half hours and a top 50 finish. That meant that he’d have to push himself to not only go the distance but also to progress quickly and efficiently.

The route started off at the Slindon Estate near Arundel and finishes up at Windsor Cathedral, taking the competitors along the South Downs Way, an ancient path set on a ridge of chalk hills. 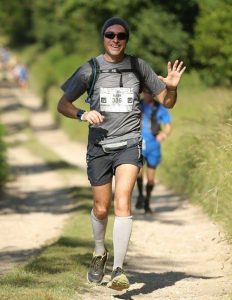 As well as incorporating some breath-taking, panoramic views of the surrounding landscape, there are also numerous historical sites to take in as the participants progress on their journey. 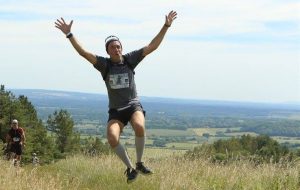 The path actually follows the journey taken by visitors in ancient times to the burial place of the very first kings of England, hence the name ‘Race to the King’.

Although it was a warm day, there were plenty of shaded areas along the course which provided respite from the sun. Mark completed the first 26.2 miles in 4 hours 7 minutes and a that point he thought he might even be in for a sub 9 hour finish, although that was based on a total distance of 52.4 miles when the event was officially billed at 53.5 miles. 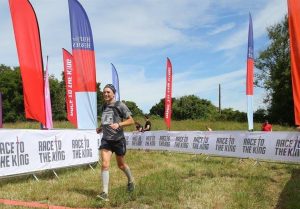 Despite taking on plenty of fluids though as well as consuming salt tablets left over from the Marathon des Sables, the threat of cramp reared its ugly head at around mile 17 which hampered his progress severely throughout the second half of the race. It was somewhat disappointing for Mark as he had hoped the salt tablets would act as a remedy to that problem. 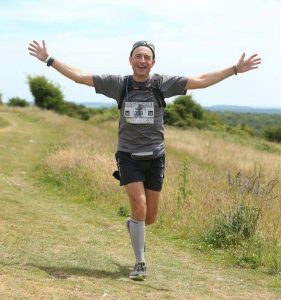 As he spent much of the second half of the race managing the situation an attempting to keep the cramp at bay, he lost a lot of time as a result and consequently, heading into the last 3 or 4 miles it began to dawn on him that he might not actually hit his sub 9-and-a-half-hour target after all. Coming past the 1 mile to go marker though he had 10 and a half minutes in the bank so he knew he was home and dry by that point. 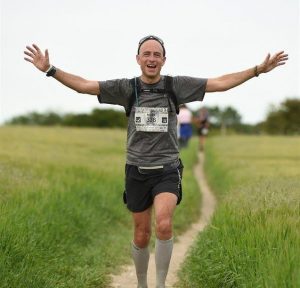 Finishing in a time of 9 hours 27 minutes and 11 seconds, Mark ended the race in 20th place overall, out of over 700 people who started the race with the intention of completing it non-stop. That’s a really good result for Mark and he could certainly be pleased with his efforts. His total mileage after stopping his watch was 54.1 miles, so he’d covered even more distance than was officially proposed.

The next venture for Mark is the Purbeck Marathon in September so he’s planning on taking some time out from doing anything too strenuous until he goes into any sort of training regime in around 6 weeks’ time. 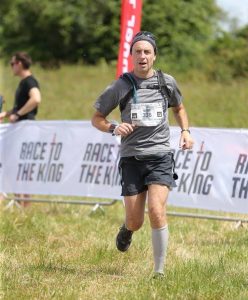 Clocking a magnificent time of 9 hours and 27 minutes, Mark managed a top 20 finish