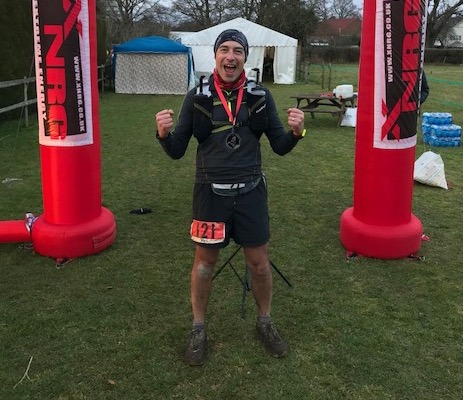 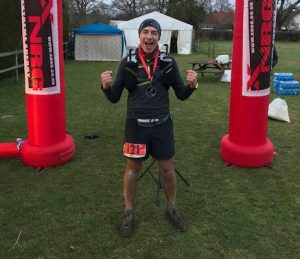 With the Marathon des Sables now only 9 weeks away, it was time for Mark Hillier to put himself to the test by taking on the 2 day, 66 mile ultra marathon called the Pilgrim Challenge. And to simulate how it might be when he battles the toughest race on earth, Mark was intending to carry 6kg on his back for both days. At the Marathon des Sables, each runner is responsible for carrying their own food and camping equipment round for the duration of their 6 day journey across over 250km of desert.

Staged across the impressive North Downs Way, the participants must follow in the footsteps of pilgrims travelling to Canterbury as they pass through the ancient countryside, picturesque villages and areas of outstanding natural beauty.

One key difference between the Pilgrim Challenge and the Marathon des Sables, aside from the distance and terrain of course, is that at the Pilgrim Challenge, everything is taken care of. You get overnight accommodation, breakfast and evening meals, plus food and drink at the checkpoints. At the Marathon des Sables of course, you have to bring all this stuff with you.

The race starts at Sandy Farm Business Park in Farnham, with the route for the first day finishing up at Warwick School in Redhill. The second day then takes the participants back to Sandy Farm. The course includes 2,374 metres of ascent.

Something else he probably won’t encounter at the Marathon des Sables is persistent rain. At the Pilgrim Challenge, he had to contend with a whole day of rain on the Saturday, which turned it into a 33 mile slog across churned up mud. It was slippery under foot but Mark battled the elements well, completing the course for Day 1 in a time of 5 hours, 46 minutes and 21 seconds. That put him in 39th place overall, which he was pretty happy with.

Sunday saw a significant improvement in the weather, which all of those taking on both days of the Pilgrim Challenge, including Mark, would have been very grateful for. Unfortunately the mud was still there though and Mark actually managed to fall over 4 times, leaving him a little battered and bruised in the aftermath. 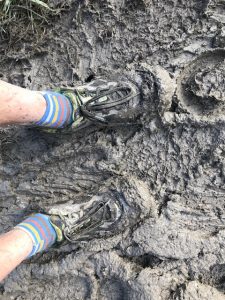 He also managed to take an unplanned detour, adding an extra 4 miles onto the route. As if it wasn’t already far enough! After completing the 33 miles, plus the additional 4, Mark hauled himself over the finish line to register a time of 7 hours, 43 minutes and 17 seconds.

Combining the 2 days of hard graft, Mark’s total overall time was 13 hours, 29 minutes and 38 seconds, putting him in 74th place. This was out of 181 who actually completed the full 2 days. A further 32 of the competitors were unable to complete the challenge, pulling out either on the 1st or 2nd day.

As opposed to being driven by time though, Mark’s main focuses for the race were just completing it carrying the weight on his back and also getting through it injury free. He succeeded on both counts so that has to go down as an extremely valuable training exercise.

Over the next couple of weeks Mark is going to focus on recovery, with a few light runs. He will follow this up with a final block of 4 weeks hard training before undertaking 3 weeks of tapering with some hot yoga thrown into the mix to help him get used to desert temperatures.

The next race he has lined up is the Oakhaven Half Marathon in the New Forest, which is on 4th March. He plans to complete that race fully loaded with weight. 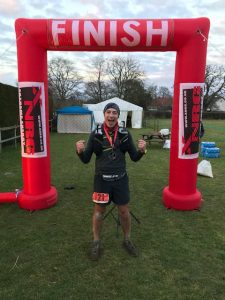