Mission accomplished for BAC trio at Dorset Conquest Half Marathon 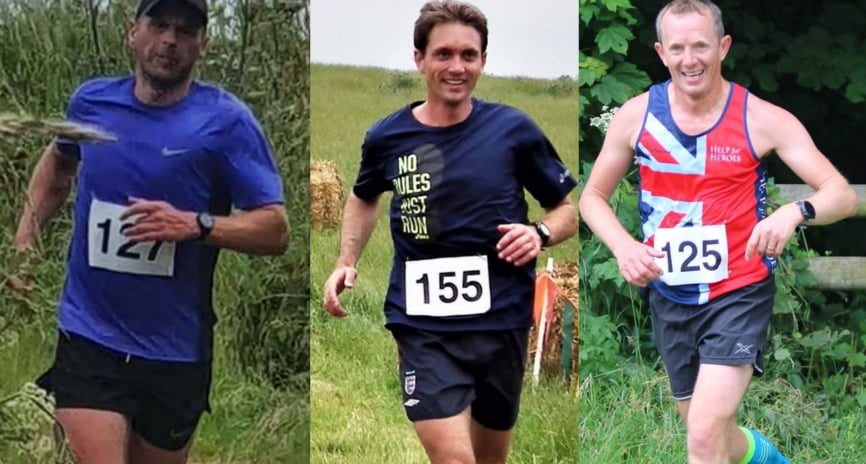 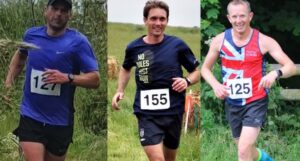 Alex Goulding, Steve Ross and Stu Glenister were the Bournemouth AC contingent in action at the Dorset Conquest Half Marathon

A scenic Roman themed trail race awaited those runners who had signed up for the Dorset Conquest 10k or Half Marathon races and, as they were about to find out, it was going to be far from straight forward.

Running in the footsteps of the Romans, the route for the Half Marathon followed paths and fields through the Dorset countryside previously inhabited by Romans.

Three Bournemouth AC members were among those heading over to East Farm to tackle the Half Marathon. They were Alex Goulding, Steve Ross and Stu Glenister. 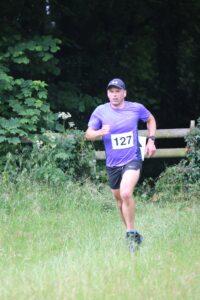 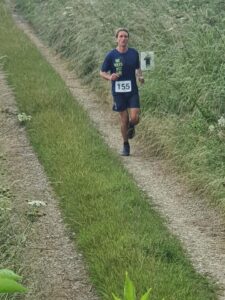 Steve Ross is quite partial to a challenging off-road route 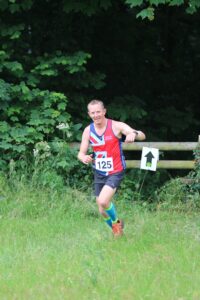 Stu showed his patriotic side in a Union Jack vest

Alex and Steve last raced at the Maverick Dorset back in May where Steve ran the 25km distance and Alex went for the 16km route. They were on a tough, off-road course over the Purbeck so both Alex and Steve had had recent experience of racing over challenging terrain.

Stu Glenister is currently training for the Ultra Tour of Arran in October where he’ll be facing a grueling 60-mile route over two days featuring over 9,000 ft of elevation. 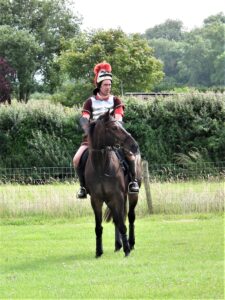 The Dorset Conquest had a unique Roman theme to it

Having recently completed the 32-mile Dartmoor Discovery Ultra Marathon as part of his training, Stu’s preparations were going pretty well thus far and he’d already proved he has the minerals to tackle a tough long ultra.

The Dartmoor Discovery incorporated almost 4,000 ft of ascent and tends to take runners 50 per cent longer than it would take them to complete a flat marathon, even though t it’s only 10k further.

Stu completed it in 5 hours 28 minutes so it was a long day but great preparation for for the challenge ahead. Then the following weekend he was back in action at the Ferndown 10k, showing his body had handled the workload well. 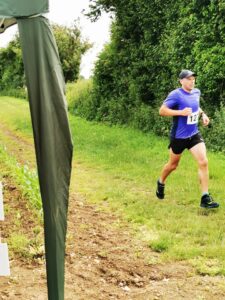 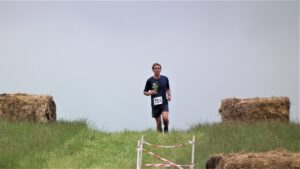 What’s that coming over the hill? Is it Steve Ross? Yes, it’s Steve Ross 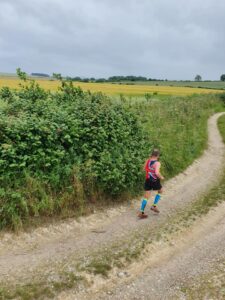 Stu had done the Dorset Conquest before in 2019

The course for the Dorset Conquest Half Marathon went through undulating footpaths and bridleways across Dorset farmland, with part of it heading along an ancient Roman road.

One aspect of the race that stood out to all three BAC members was the thigh-high shrubbery they had to contend with along many stretches of the route.

At times the grass was so long that it was almost as if there was no path. That made it extremely difficult to gather momentum and get a good pace going.

As is the case with all good half marathons, the race was started by a Roman Centurion on horseback! 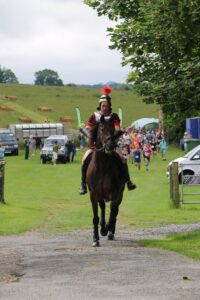 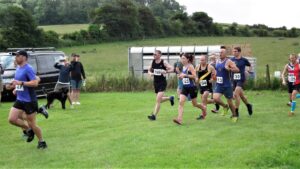 And they’re off with Alex immediately hitting the front 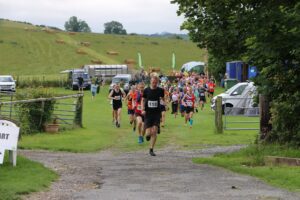 It was Lewis Clarke of Lonely Goat who took the initiative in the early going and he was soon well out in front. Alex was hot on his heals though and had made a strong start of his own.

The first was pretty much all uphill but Alex still went through it in 6 minutes 53 seconds. The second mile contained a bit of downhill which enabled Alex to pick up the pace before a short incline. He got through that one at 6:23 pace. 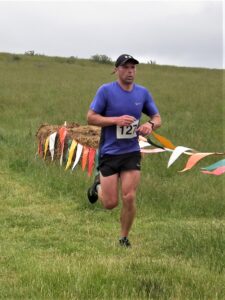 Alex found the long grass tough to get to grips with 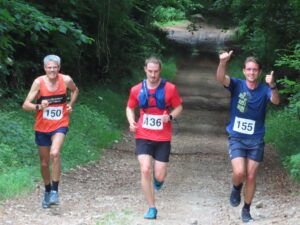 Steve gives the thumbs up, with Mark Packer on the left and Jon Huggins in the middle 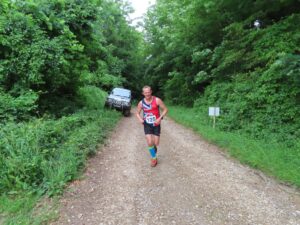 Stu makes his way down the track

Then it was another tough climb on the third mile before a couple of nice descents over the next two miles where Alex produced a 6:23 and 6:43 mile. He then hit the hills again on the sixth mile.

Following that it was a downhill for the 7th and 8th miles before embarking upon a massive climb for the 9th and 10th miles. That left just over a parkrun distance left and Alex was able to pick up the pace well over the last couple of miles as they contained some descending. 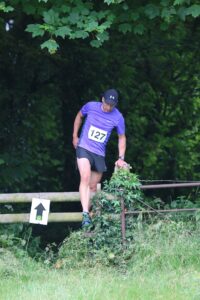 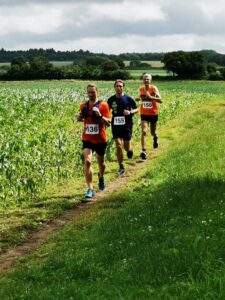 Steve heads through the field in a three-man train 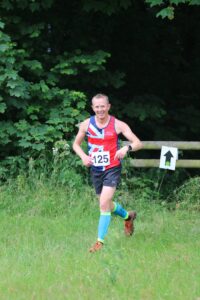 Slightly out of his comfort zone over the half marathon distance, Alex was relieved to get to the finish line when he arrived, completing the 13.28 miles in a time of 1:31:59.

That was enough to see him finish as runner up, with Lewis Clarke picking up the victory in a time of 1:28:59. It was a strong run from Lewis to come in two minutes ahead of Alex as he has been an excellent form of late.

John Huggins grabbed 3rd place and he was a further three minutes behind Alex, clocking a time of 1:35:04. Then Mark Packer of Littledown Harriers reached the line 6 seconds later to take 4th position. 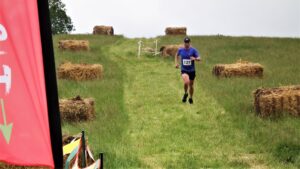 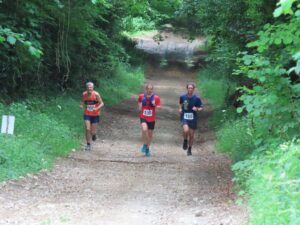 Steve on he right with his newfound running buddies 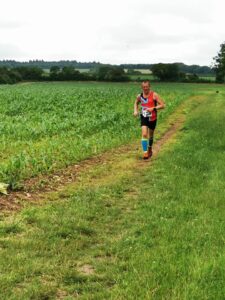 Making it two BAC men in the top five, Steve Ross completed the course in 1:38:08. He’s also been showing magnificent form in training recently but again, he struggled in the long grass. The course incorporated over 1,000ft of elevation and Steve’s time reflects just how grueling it was.

Having run the course before in 2019, Stu had some idea of what to expect but of course, it was always going to be a testing one. He came into it off the back of a decent week’s training which included a duathlon on the Thursday prior to the race.

Getting round in a time of 1:49:59, Stu finished in 11th position in the overall standings. A total of 73 runners successfully made it to the finish that day and they’d certainly all earned their medal. 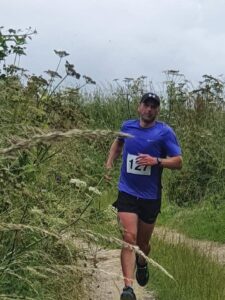 Anne-Marie Bayliss was 1st female, finishing in 7th place overall in a time of 1:41:50. Then it was Claire Sparrey of Square and Compass Trail Runners who was 10th overall in 1:49:55.

Sarah Hyde of Egdon Heath Harriers was 3rd female over the line, completing the course in 1:53:36. 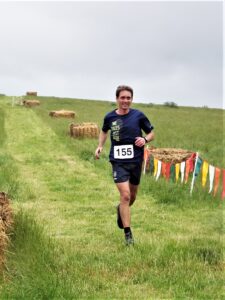 The Dorset Conquest 10k race that was on the previous day was won by Barry Miller of Poole AC in a time of 45:49. Joe Godden of Poole Runners took 2nd place in 47:01 with Donald Barnes taking 3rd in 52:53.

Kirstin Hay of Poole AC wasn’t going to bale out and she rolled in in 5th place overall in 56:54. That won her the prize for 1st female. Sian Barnes of Poole Runners was 9th overall and 2nd female in 1:00:23 and she was followed by Annabelle Peacock who took 10th place and 3rd female in 1 hour 1 minute. 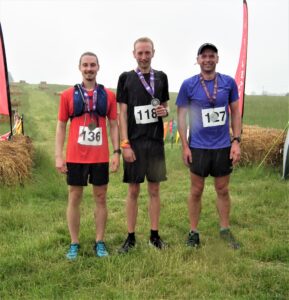 The Dorset Conquest Half Marathon top three, with Alex on the right

Even though he did well to finish 2nd, the Half Marathon race certainly reaffirmed Alex’s desire not to run longer distances. He much prefers a 5k or a 10k race and usually even a 10-mile event is a bit of a stretch for him.

He’ll certainly be glad to have parkrun back so he can resume doing what he’s much more accustomed to, turning up at Kings Park at 9am and thrashing out the two-and-a-half lap course whilst being surrounded by many others doing the same.