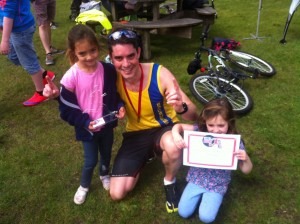 A bit of catching up and some wins to report………………..
Congratulations to our Web Adminstrator, Chris O’Brien, on his win in the DYMB (Dorset Youth Marching Band) Moors Valley 10k on Sunday 17th May. Chris was 1st of 57 competitors in an off-road race in a time of 39.07. Meanwhile, Ross Smith and Simon Hearn were amongst the 1500 or so runners in the Bognor Regis 10k, with Ross finishing 13th in 37.18, and Simon 56th in 41.15. The race was run on a nice day, over a good course, the only problem being the wind as the competitors reached the seafront towards the finish.
A week later, and another BAC win – this time in the Ox Ultra Marathon, won by Anthony Clark in a time of 4.39.22. This was an impressive performance by Anthony over a course of 35 or so miles described as taking place “in the beautiful rolling hills (that’s big hills) of Wiltshire”. 158 competitors completed the entire distance. The Ox Half Marathon was won by another name we know, Stuart Fox, at the moment unattached, but hopefully only temporarily so!
Many of you will have read Andy Gillespie‘s account of the ‘3 Mountain’ stage of his ‘4 Marathons and 3 Mountains’ challenge. Unfortunately, bad weather defeated Andy‘s attempt to conquer all of the three mountains, Snowdon, Scafell Pike and Ben Nevis. After a successful ascent of Snowdon, pouring rain and poor visibility meant that the marshalls required Andy and all the others to turn back some 300 metres from the summit – it seems part of the problem was that some of the participants were not deemed sufficiently fit to continue, which meant everyone had to abort. The weather again intervened on Ben Nevis, this time snow and ice, with the result that without full climbing gear it wasn’t possible to reach the summit sufficiently safely. Undeterred, Andy has already signed up for the same challenge next year!
In the Bournemouth Parkrun on 16 May, BAC had yet another winner, namely Nikki Sandell, 1st lady, and 15th overall of the 393 competitors. Also running were regulars Steve Cox, Jud Kirk, Paul Consani, Ian White and Joe Price, who were joined by Dave Parsons, getting back to form with a PB. Meanwhile, in Poole Park, Simon Munro and Robin Copestick were 4th and 5th respectively of the 618 finishers. The following week, 23 May, Paul Dixon-Box ran a PB to finish 2nd in the Bournemouth Parkrun, with Jud Kirk, Ian White, Joe Price and Paul Consani also competing amongst the total of 395. Steve Way added to the list of BAC winners by finishing 1st (of 686) in the Poole Parkrun on 23 May, joined by Sanjai Sharma in 20th position.