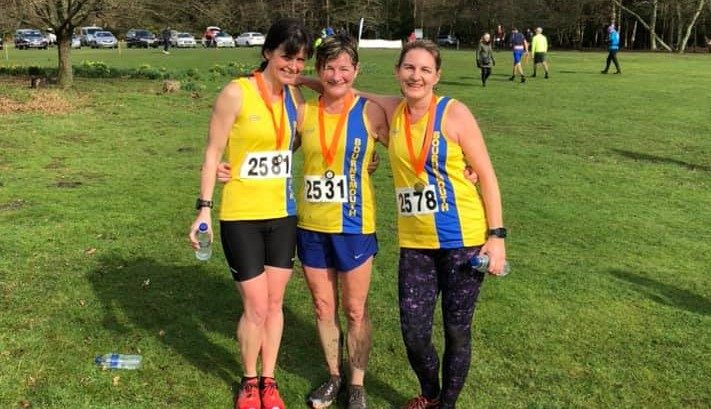 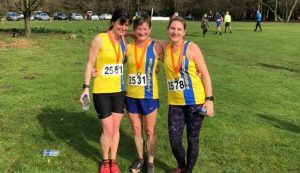 Nikki Sandell, Louise Price and Caroline Rowley were the Bournemouth AC trio that made the trip to Avon Tyrrell for the Hope Rising Tyrrell Trail Run

When the Bournemouth AC trio of Nikki Sandell, Louise Price and Caroline Rowley went on a road trip to Avon Tyrrell for the Hope Rising Tyrrell Trail Run, if it was mud they were after, they certainly got a lot of bang for their buck.

The conditions were such that at times they were up to their knees in it and it was incredibly slippery and slidey. It was all part of the fun though and the BAC ladies handled the treacherous conditions commendably.

There was a 5k race consisting on one lap and a 10k race which was two laps and the BAC ladies went for the 10k option. If you’re going to go through the mire once you may as well do it twice, right? That was the theory anyway.

The event was put on by Hope Rising, a Christian charity that helps people in need in a variety of ways. The course went across some lovely scenic countryside. But it was extremely challenging. As well as the deep mud and slippery mud, there were plenty of ups and downs as well. It really was a true test of stamina and resolve.

The course even had a touch of the tough mudders about it. On one particular section there was what could only be described as a mud slide. And to add to the terror, it had a barbed wire fence on one side and an electric fence on the other!!

There were some incidents along the way as well. Caroline hit the deck at one point on a very slippery downhill section. Then Louise very nearly went down and went to grab the wire fence next to her when a guy who was behind shouted to her that is was an electric fence! Fortunately managed to stay upright in the end though and didn’t get electrocuted!

When the results were divvied up at the end, the ladies and men were listed separately. Nikki finished as second placed lady in a time of 57:23. The first lady had come in with an advantage of over three minutes though, coming in in 54:02. That was Anna Smith-James.

Sarah Lewis of Totton RC was the only other lady to finish in under an hour. She crossed the line in 59:28.

It was advertised that there would be a men’s and a ladies’ team prize but they only gave out one team prize in the end and that went to Sir Runalot. 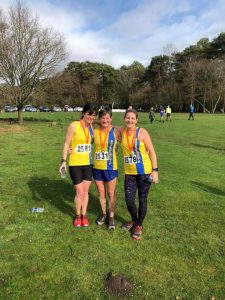 The Bournemouth AC trio would have won the ladies competition though. Since it was only a small charity event though, it didn’t matter.

Former Bournemouth AC man Trev Elkins claimed victory in the 5k race finishing in 22:45. He fended off competition from Thomas Crawley of Lonely Goat RC who was second in 24:30 and Ross Wayne of Purbeck Runners who was third in 26:21. 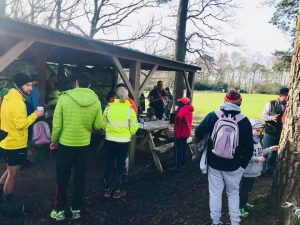 Trev Elkins (yellow jacket) was the winner of the 5k race

Caroline had great fun, even though she said it felt like she was wearing welly boots at times because her legs were so caked in mud. She found it nice to be running off-road for a change though.

She also said it was fantastic to be on a road trip with her teammates again as well and it made her realise she’s missed that enormously over the last couple of years.

Louise found it hilarious in places and although she didn’t find the race to be quite as much fun as the others, Nikki thoroughly enjoyed the road trip, as they all did. 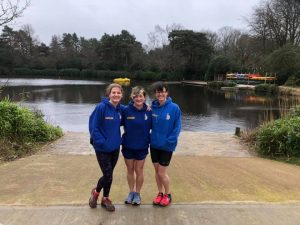 Although there was plenty of fun be had traipsing through the mud, the BAC ladies enjoyed the road trip more than the actual race itself