A lot has been happening this weekend!
In Amsterdam, on Sunday 19 October, Jacek Cieluszecki ran the Marathon in 2.29.55, to finish 28th (and 4th M35) of a total of 12197. This might be a performance many of us can only dream of, but Jacek was hoping to break his PB of 2.27.45. However, the race commentary describes “difficult weather conditions”, with continuous sun and temperatures of 18 degrees, and a strong wind on parts of the course, so Jacek really has no reason to be disappointed with an excellent run. Also in Amsterdam, Manol Dimitrov was competing in the Half Marathon, and finished 32nd of 14237 in a time of 1.17.02. The fact that Manol also did not break his PB (1.16.43) might be down to the conditions.
Meanwhile, in Birmingham, Steve Way continued his build up to the 100k World Championships next year by running in the city’s Half Marathon, one of a series of races Steve is running each week, including the Great South Run in Portsmouth next week. Steve was 11th of a total of about 1500 in 1.10.19, not bad especially considering Steve is racing every weekend on top of a weekly mileage exceeding 100 miles, displaying exactly the stamina which is needed for the challenge ahead. 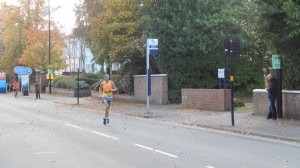 Steve Way competes in the Birmingham Half Marathon

Two other BAC athletes who, like Jacek, didn’t quite achieve their aims this weekend, but nevertheless can be pleased with their runs, were Graeme Miller and Chris O’Brien. Graeme ran the Cabbage Patch 10 mile race, on Sunday 19 October, in the Twickenham area, in 58.07, a PB by 22 seconds, but not the sub 58 Graeme had hoped for.  However, that can be explained by, as Graeme describes on Facebook, a heavy tumble on wet leaves at 6.5 miles, resulting in cuts and bruises to his elbow and hip.  There was a silver lining – Graeme ran a few miles with Mara Yamauchi, who finished a mere 30 seconds in front of him.  Graeme was 36th of 1501.  On the same day,  Chris ran in the inaugural ‘xch10k’, a 10k race organised for a charity starting and finishing at Two Riversmeet Leisure Centre in Christchurch, with an out-and-back course along the coast to Mudeford.  Chris had hoped for a sub 40 time, but finished 7th (of 230) in 40.43.  Chris says of the course that parts of it were quite fast but there was a short, but steep, hill and a set of steps about half way, and Chris is surely correct when he says that only these prevented him from going under 40 minutes.  Also running in this race were Joe Price, 21st in 45.18, Ella Nicholas, 61st in 51.03 (good to see one of our youngsters competing – Ella was first in her FJ category) and Will Price, 113th in 56.40.

Another BAC athlete perhaps not entirely satisfied with her race was Gemma Bragg, who ran the Salisbury Half Marathon, also on 19 October,  in 1.36.45, to finish 82nd.  We all know that Gemma is capable of a much faster HM than this, and Gemma herself says “it was not my day – left my mind and legs at home”!

On the other hand, Paul Hill must have been pleased with his run in the Weymouth 10 (mile), another race on 19 October.  Having examined the race entries, Paul felt that he could finish in the top 10, despite his very intensive racing activities in the two weeks since his inaugural marathon in the Bournemouth Marathon Festival only two weeks earlier.  In the event, Paul was 4th, in a time of 62.11 (of 183).  What Paul didn’t learn from the entry list was that Peter Thompson and Simon Munro, who entered on the day, were also planning to compete, and Peter was 2nd in 58.25 and Simon was 3rd in 59.48.  So, once again, BAC were the winners of the team trophy – well done!

The previous day, Saturday 18 October, the Parkruns went ahead as usual.  In Poole, Simon Way was 3rd of the 501 runners, and in Bournemouth, 2nd was Paul Hill (who else!), 6th was Ian White and 8th was Jud Kirk.  Also running, amongst the total of 208, were Steve Cox, Ian Graham, Louise Price and (no relation!) Will Price.

So, a busy weekend – pity there aren’t more photos!