No punches pulled on Boxing Day at Round the Lakes 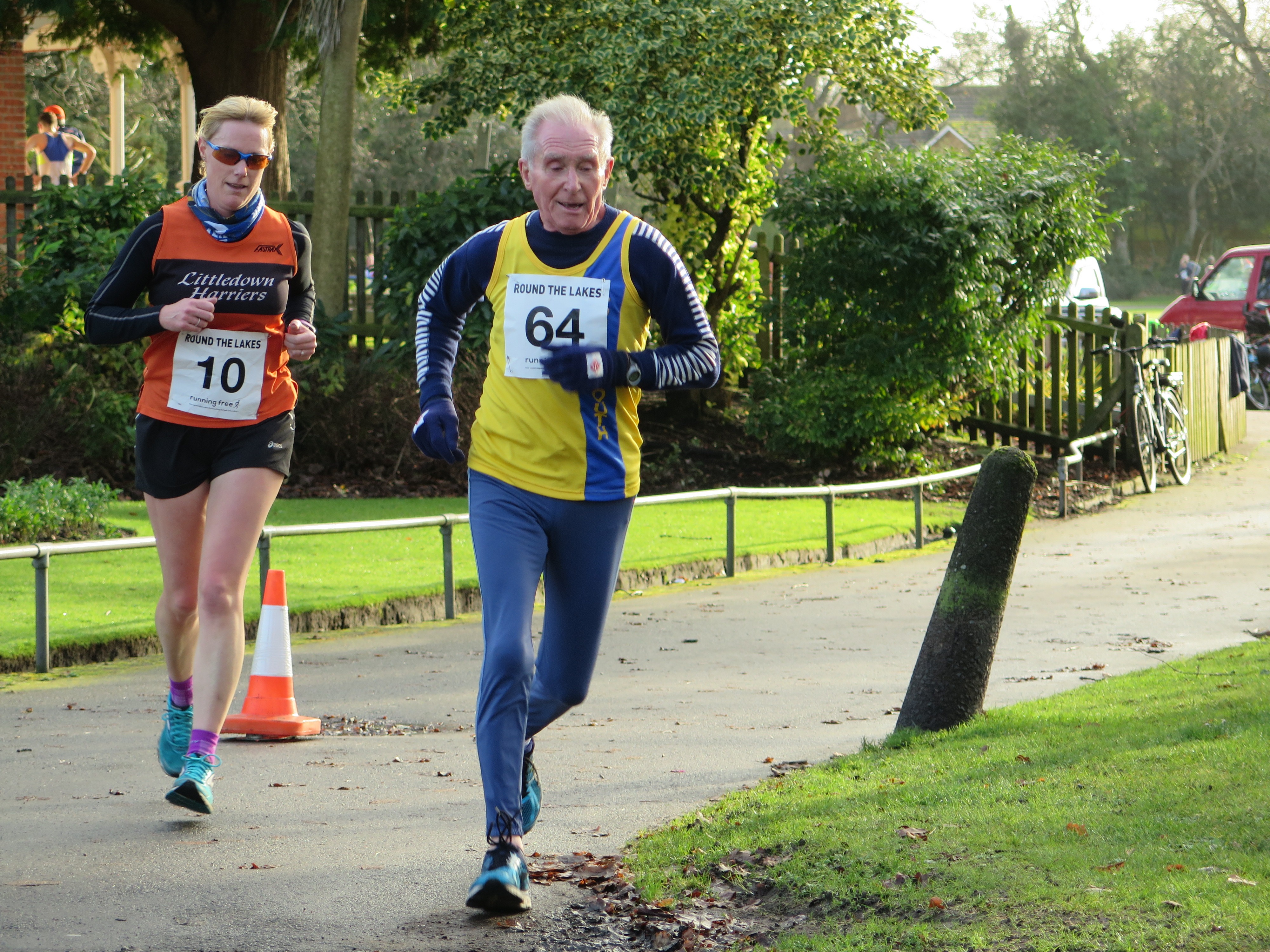 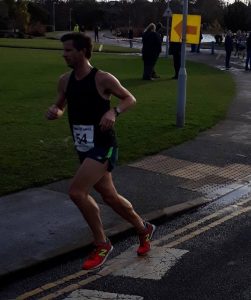 Whilst many of us were suffering the effects of the Xmas over indulgence or polishing off some more of that leftover turkey and mince pies, a small group of BAC crusaders were at Poole Park for the traditional Boxing Day Round the Lakes 10k.

The chance to burn off some of those Christmas calories in a fast and flat race has always proved popular amongst the running fraternity and this year was no exception, with a field of 345 athletes taking to the start line.

Bournemouth AC has a good tradition in the Round the Lakes 10k, with Dave Long being victorious last year and Rob McTaggart winning it the year before.

The conditions on the day were nigh on perfect as the sun was shining, the temperature was reasonably warm and there was virtually no breeze. The only issue was the presence of some large puddles from the rain that had fallen over night.

Having recently upped his weekly mileage to around 80 miles, Anthony Clark is currently in the throws of his training for the Anglo Celtic Plate 100k race on 31st March where he will represent England. Anthony swooped in for a top 10 finish at the Round the Lakes race and was first BAC member home in a time of 34:35.

This gave put Anthony 2nd place in the M40 category and put him 10th overall. This was a pleasing result for Anthony, particularly off the back of enjoying the Christmas Day festivities. It equalled his 10th place finish in the race last year and improved on his time of 35:19. 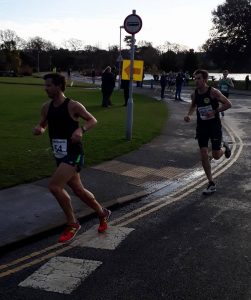 Anthony (number 54) was first BAC member over the line finishing in 10th place with a time of 34:35

The next man over the line for BAC was Ollie Stoten, who took 33rd place in a time of 38:07.  Ollie has also been putting in some serious hard work of late, hitting around the 60-70 miles per week range.

This was far from Ollie’s best performance but given that he was very tired from having been working nights over Christmas that was understandable.

Finishing as the 5th M50 over the line, Jud Kirk had a decent run, clocking a time of 41:43. Jud set off quite quickly for the first kilometre, then settled into a consistent pace until the last kilometre. It was then that he was embroiled in a battle with two others who he’d been running alongside for the past 5k. 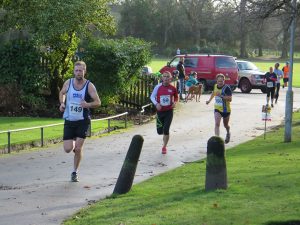 Jud Kirk (AKA Jeremy) has found a bit of form in the latter stages of the year and ran well to finish as 5th M50 in a time of 41:43

One of his adversaries managed to slip away earlier in the final kilometre, but Jud did manage to finish ahead of the other one. Although he was closing the gap, the ground was too much for Jud to make up so he had to settle for a 67th place finish overall.

Crossing the line in 106th place, Steve Parsons ran a good steady race, coasting to a 45:13 finish. Steve has been in great form of late, securing a fabulous new PB of 43:31 at the Boscombe 10k at the end of November.

For this one, he decided to take it easy though and enjoy the run. Steve’s wife Rozanne also did the race and managed to seal a new PB of 1:06:46. 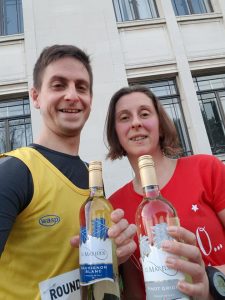 Chasing Steve’s tail throughout the bulk of the race was Kirsty Drewitt. Kirsty was targeting a 47:30 finish, having previously set a PB of 47:52 in the ferocious conditions of the Christmas 10k at Christchurch.

When Steve ghosted past her in the early stages of the race, Kirsty took a spontaneous decision to abandon her race plan and attempt to stay with him. Although it was tough for her to keep going at this pace and it was essentially alien territory, she stuck at it and ultimately shocked herself by crossing the line 3 seconds after Steve. 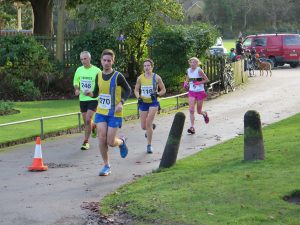 Kirsty Drewitt did her best to stay with Steve Parsons throughout the race and it paid off, earning her a huge new PB

This gave Kirsty a 107th place finish and a stunning new PB time of 45:16. This was an improvement of 2 minutes 36 seconds on her previous best.

Kirsty has been making tremendous strides of late and it was great to see this illustrated by a racing performance that she could be extremely proud of. It also underlined that her ability goes way beyond what she thought she was actually capable of. She was 13th placed lady on the day. 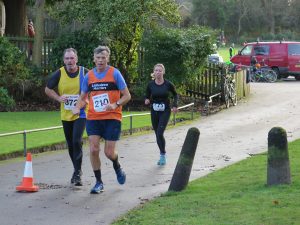 Quite a few people seem to have been struck down with the lurgy over the Christmas period and unfortunately, Ian was one of those. This meant that he wasn’t feeling in great shape come race day, hence he never really got going. 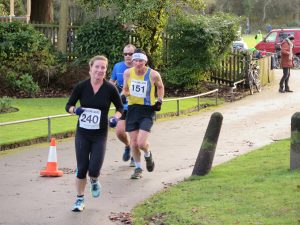 After coming down with the lurgy Ian Graham wasn’t on his best form but he still turned out and completed the course in a respectable time of 52:07

One plus point for Ian though was that he did get to watch the front of the race unfold as he was lapped by some of top contenders including Ant Clark. Plus he himself also managed to lap some of the back markers along the way. Ian was 1st M70 over the line. 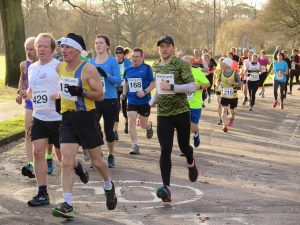 Proving he’s still got what it takes at 79 years of age, Tom Cochrane completed the race in a solid time of 54:03 to take 4th in  M70 category and 212th place overall. 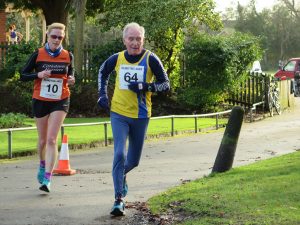 Tom Cochrane performed well to finish in a stellar time of 54:03

Following shortly after Tom was Helen Ambrosen who came in 214th overall in a time of 54:06. Helen hasn’t been able to do much running over the past 2 or 3 years and this was in fact her first 10k race for 2 years.

She had done a parkrun on the Saturday, a few days before, and she managed to complete the entire Round the Lakes course at the same pace as she did the parkrun in so that was already a good sign.

Looking to knuckle down to some more regular training and some more races as well, Helen is hoping to see some further improvements in the near future. She was 2nd in the F60 category. 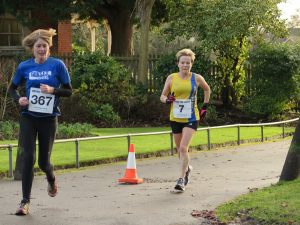 The race was extremely well organised by Poole AC and with each finisher being awarded a bottle of wine for their troubles, it was a nice post Christmas social event that seemed to send the vast majority of the participants home in good spirits. 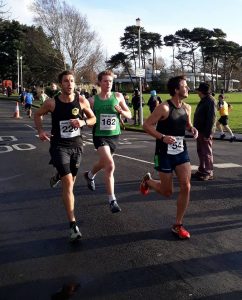