No Repetitive Strain for Stu Nicholas at Littledown Marathon 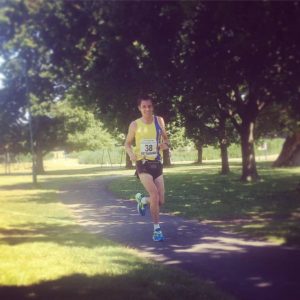 It’s a route that is often used by Bournemouth AC for Thursday night training runs. In fact, only last week a group from BAC were doing a session there which involved a few laps of the Littledown loop. Whilst in the recovery phase, they were contemplating how hard it would be to run around the course 26 times. That was the challenge that Stu Nicholas took on on that hot and sunny Sunday morning.

Although it’s flat by nature, the surface is quite uneven at Littledown Park which does actually make it quite tough to run around. Plus it’s mostly grass as opposed to concrete. The approach Stu was going to take was to just switch off and let his legs go on autopilot and just hope for the best.

The conditions were quite cool at first but it soon heated up. Stu had his partner and his brother on hand to give him some much needed encouragement and they thoroughly enjoyed their morning basking in the sunshine whilst Stu was racking up the mileage. In fact there was great support all the way around from onlookers which really helped him to keep going and stay focused despite the repetitive nature of the race. 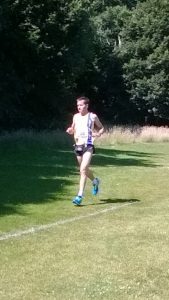 It was a lovely scenic route, but perhaps less so after you’ve seen it 26 times

Stu liked the idea that it was going to be a mental challenge as well as a physical one, which would make it different to your average marathon. He handled it by breaking it down into chunks, so doing six first, which meant he had 20 left. Then another seven laps took him to half way. It was getting a bit monotonous towards the end but Stu did well to persist and maintain the pace.

In fact, Stu did so well that not only did he complete all 26 laps and the full marathon distance, he finished in second place overall with an incredible time of 2 hours 54  minutes and 55 seconds. That’s an average mile page of 6 minutes 40 seconds. 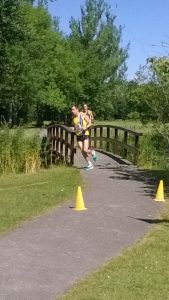 Even 26 laps around Littledown Park wasn’t a bridge too far for Stu who seems to have mastered the art of marathon running, whatever challenges the course may bring

The chap who was leading the race faded towards the end as well and Stu was closing in on him fast but in the end he just managed to beat Stu to it, finishing a mere eight seconds ahead.

Nevertheless, it was still a mightily impressive performance from Stu and he can be very proud of his efforts. He’s now demonstrated that he can handle a very testing mental challenge as well as a difficult physical one.

Admirably, 60 out of 62 competitors completed the full distance in the end, with the longest taking just under seven hours to finish.

After the race Stu celebrated with a dark chocolate Magnum ice cream and a pint of ale in the Saxon Bear in Christchurch. Both very well earned after a tough morning’s work. Rumour has it that Stu is already looking forward to the next training session at Littledown Park.

There’s nothing like a nice, sunny, Sunday morning canter around the park – 26 times! As you do