Ollie Stoten gets his just deserts in Namib Race 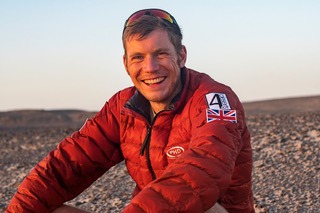 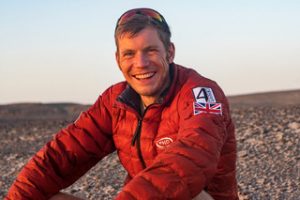 With a 250km route across desert terrain over 6 stages in the space of 7 days, Ollie Stoten had his work cut out in the Namib Race, part of the 4 Deserts series

The Namib Race is a 7-day, 250km trek across the Namib Desert and within the Skeleton Coast National Park. The route works its way across beaches where the Atlantic Ocean meets the desert, through seal colonies, salt pans and salt lakes which are home to flamingos, through in infamous dunes of the Namib Desert into dry river beds, oil and diamond mines and across vast stretches of desert plains.

The Namib Race forms part of the 4 Deserts series, also featuring races in Atacoma, Gobi and Antarctica. It follows an identical format to Marathon des Sables, which is renowned for being the toughest footrace on earth, so that gives some idea or the enormity of the task.

It was a challenge that Ollie Stoten was looking forward to getting to grips with though – and if anyone could handle the hardcore nature of the race and the extreme and relentless distances the competitors are required to cover, day after day – it would be Ollie.

Ollie knocks out ultra-marathons on a regular basis and puts in extremely high mileage every week, often going for tough terrain routes with plenty of inclines.

The Namib Race is obviously taking it to the next level though, since it involves 5 consecutive stages and then another additional one to make it up to 6 in the space of a 7-day window. The courses are long and arduous as well and with it being in the middle of the desert, the sandy surfaces make for immensely tough and challenging running throughout.

The first stage was a nice, gentle 42km (26 miles) to ease the competitors into it as they gained their first introduction to the rigours of the Skeleton Coast. Completing the course in 3 hours 38 minutes and 36 seconds, Ollie was in 2nd place in standings for Stage 1. 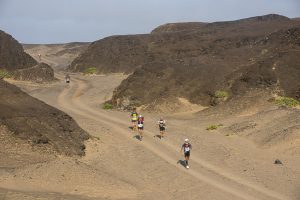 The front group on Stage 2

Stage 2 was a slightly shorter 40km (25 miles) on the Diamond Trail over Scott’s Bridge. Ollie completed the route in 3:23:24, which was 3rd fastest on the day. 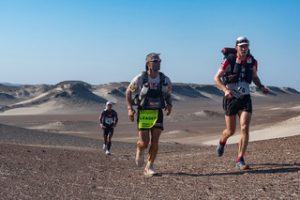 Next up it was a stage that Ollie really enjoyed. The 43km (27 mile) route that incorporated some very runnable terrain along the Skeleton Beach where he felt he could really open up. Ollie took 1st place on this stage with a time of 3:44:08, finishing seconds ahead of Vicente Juan Garcia Beneito of Spain who won the first two stages and Wong Ho Chung of Hong Kong. 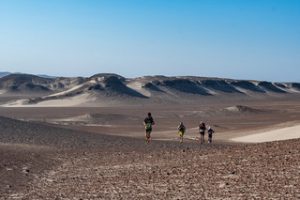 Stage 4 was the longest stage of the race, covering a massive 81km (50 miles). The stage was known simply as the Long March and would test all the runners to their absolute limit as they passed through the world’s oldest desert. 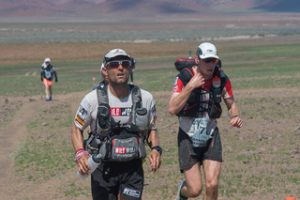 Race leader Vicente Juan with Ollie alongside him on Stage 4

It was on this stage that Ollie conceded a fair bit of time to his Garcia Beneito and Wong, crossing the line in a still very impressive 9:37:12 which put him in 3rd place. His two main rivals completed the race in 8 hours and 11 minutes. 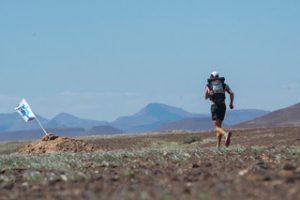 That put Ollie out of contention for the win and made it pretty much a straight shoot out between Garcia Beneito and Wong. The Spaniard did have a 16-minute advantage from the first two stages though so it was always going to be a tough ask for Wong to make that up on Stage 5, which would be his final opportunity to do so. 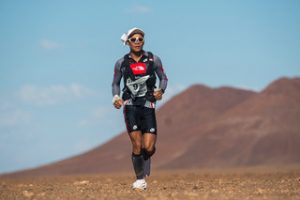 Ollie was comfortable in 3rd place though and it looked like that was where he was going to stay. The 5th stage Dune Day, taking the runners on a 40km (25 mile) journey through the dunes of the Namib Desert.

Again, Ollie finished the day in 3rd place, clocking a time of 4:15:41. Wong Ho Chung took the win on the day with a time of 4:04:28 but only gained 5 seconds on Garcia Beneito which all but confirmed him as champion provided he could get through the final stage.

The last stage, and certainly the least, in terms of distance at least, was the 10km run into the finish, aptly named the “Final footsteps in the Namib Desert”. Once they’d made it this far, the competitors could breathe a huge sigh of relief knowing they had pretty much made it. Rather fittingly, it was Garcia Beneito who won the day, finishing in a time of 44:27. Ollie took 2nd place for the stage with a time of 45:09, with Wong in 3rd in 45:58.

The final standings were calculated by the cumulative times of each athlete, combined over the 6 stages. Of course, winning stages 1,2,4 and 6 – Garcia Beneito claimed the crown, with his total time amounting to 23 hours 23 minutes and 32 seconds. 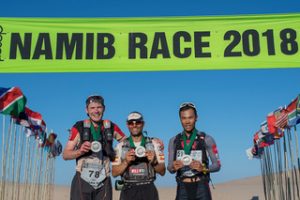 Wong Ho Chung was 2nd in 23:41:16 and Ollie took a very proud and rewarding 3rd place, with his overall time standing at 25:24:10. Takuya Wakaoka of Japan was 3 hours behind Ollie but took 4th place overall. Then it was Nyikolaj Roskovics of Hungary a further hour back in 5th position.

Completing this race would surely have to go down as one of Ollie’s best achievements to date. But to not only complete it but to take 3rd place out of the 93 participants who took to the start lane was a tremendous achievement and one that Ollie can look back with immense pride.

Ollie thoroughly enjoyed the experience though and said it was basically a running holiday. I’m not sure if running 250km (155 miles) across desert terrain is everyone’s idea of a holiday but well, it’s certainly a healthy alternative to lying on a sun lounger sipping cocktails all day. 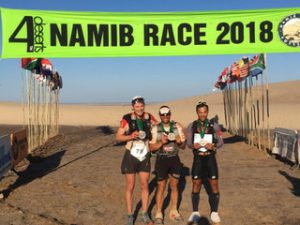