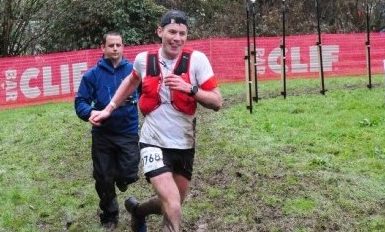 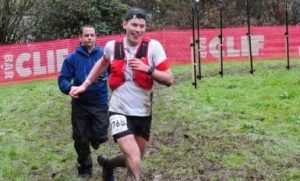 On a very wet day and in extremely muddy conditions, Ollie took on the 32.8 mile CTS Exmoor Ultra, the toughest race of the CTS Series

Even the horrid weather and horrendously boggy conditions couldn’t dampen Ollie Stoten’s spirits as he claimed a magnificent victory in the Endurancelife CTS Exmoor Ultra Marathon.

The race took place on the western side of Exmoor National Park, a true mecca for the battle hardened trail runner. The course featured steep climbs, long descents, open moorland, thick wooded valleys, dizzying cliffs and exquisitely beautiful rivers along a stretch of coastline that is unsurpassed. In fact, the race organisers profess that there is no other course in Britain with such a variety of terrain in such a compact area.

The Exmoor course is thought to be the toughest in the entire CTS Series and is a gruelling test of endurance for even the most accomplished of trail or fell runners.

Fortunately though, Ollie is one of the most accomplished ultra runners out there and the huge elevation and often off-road nature of his training stood him in good stead for the huge challenge ahead of him. 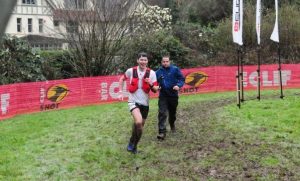 Ollie was in his element on a course that featured 6,415 ft of ascent

The event featured four different races; a 10k, a half marathon, a marathon and the ultra that Ollie did. The distance of the ultra race was billed at 32.8 miles and it included 6,415 ft of ascent. That didn’t worry Ollie though and in fact, a race of that sort of profile is generally his forte.

At the 1st checkpoint, Ollie was the 3rd person to arrive in a time of 45:27. After 1 and a half hours of running, Ollie arrived at the 2nd checkpoint, still in 3rd place.

As he reached the 3rd checkpoint Ollie came in with two of his contemporaries and they were just over a  minute behind the leader, Ian Symington. They were now half way through the race.

Before they reached the next checkpoint Ollie had managed to reel in the leader and the front group were back together. Only briefly though before Ollie decided to make his move as they were going up one of the many brutal hills. 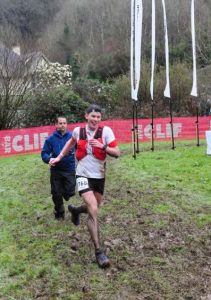 Ollie was in 2nd place at the half way point in the race, before he really began to turn the screw, leaving his rivals trailing in his wake

Once he’d opened up a gap, he was determined to hold onto his advantage, hammering it along the next flat section for around 10 to 15 minutes in an attempt to preserve his lead.

Reaching the 4th checkpoint in a time of 3 hours 32 minutes, Ollie had 1 minute and 43 second advantage over Galen Reynolds who was 2nd. By the time he got to the final checkpoint, Ollie had extended his lead to over 6 and a half minutes, coming in with a time of 4 hours 40 minutes and 16 seconds.

That meant he could cruise to the finish, knowing that he had the win in the bag. It was a great feeling for Ollie and he was elated as he crossed the line, completing the monstrous course in a time of 5 hours and 56 seconds. 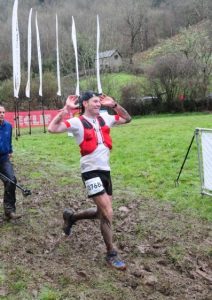 Approaching the line in just under 5 hours and 1 minute, Ollie was delighted to seal a quite brilliant victory

It was a superb achievement for Ollie. However, he is not one to rest on his laurels and said that he would love a tilt at the course record on a drier day when the conditions are more favourable. The current course record stands at 4 hours 34 minutes and 50 seconds. 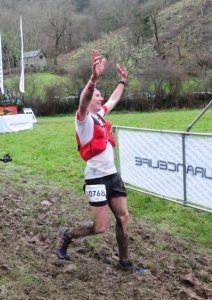 Finishing with a winning margin of over 8 minutes, it was a very proud day for Ollie

It was a day of double celebration though for Ollie, as his partner, Gail Brown, finished as 1st placed female, crossing the line in a time of 6 hours 37 minutes and 17 seconds.

Gail has been coming along to some of the Tuesday night interval sessions with BAC lately but considering this was her first proper long distance run, she did extraordinarily well. The 2nd placed lady was Daisy Jackson, coming in with a time of 6 hours 41 minutes and 40 seconds. 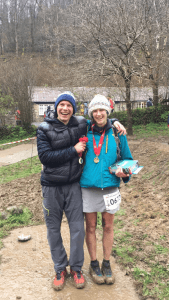 In what turned out to be a truly memorable day for the pair, Ollie Stoten and his partner Gail Brown scooped the prizes for 1st placed male and 1st placed female