One Winter Series and Three Parkruns

Friday night saw the fourth 5K in Poole Runners annual six part Winter Series take place down on Boscombe Pier. It’s always a popular event and among the 151 runners braving the winter’s night air (some only had shorts and a vest on!) were 7 adventurous Bournemouth AC souls.  Dancing under the moonlight to take home 1st position on a run he dedicated to a packet of chocolate Hobnobs was Rob McTaggart. Maybe I should eat more chocolate covered biscuits… Recent signing Heidi Tregenza showed her value by taking home 2nd Lady with a PB of 18:50. Nikki Sandell and Gemma Bragg must be at home right now lacing up their trainers as all three of them share very similar times for the 5K distance. Interesting viewing for the neutral! January transfer window new boy Ben Walliman wasn’t affected by his run down from Westbourne as he picked up a PB of 18:56. He is looking like a very promising addition to the club. Paul Hill came in 5th with a solid 17:51 and Brandon Meredith not far behind in 19:14. Jud Kirk (20.00) and Simon Hunt (20.49) both came in under 21 minutes to round of a solid BAC showing down on the Prom. The next race in the series is 20th February. Better get some chocolate Hobnobs in….

Poole – Unfortunately Poole parkrun had to be cancelled due to very slippery dangerous conditions down in the park. But someone ran down to Poole from Boscombe Pier…. 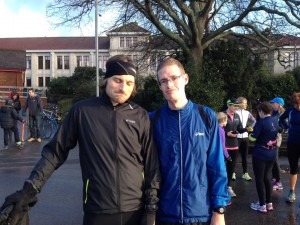 Blandford – He’s at it again! After Jez Bragg’s maiden appearance at a parkrun last month. Guess what? He’s made it two. Running 6.5 miles down to Blandford, coming 1st runner at parkrun and then running 5.5 miles home? Jez made it a morning to savour. Only hope he had lots of his beloved but “costly” Almond Paste on toast. 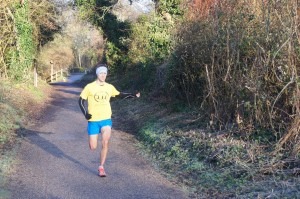 Hoping Gemma has left him some Almond paste for when he gets home!

Brockenhurst – Bournemouth AC were everywhere this weekend, Philip Mosley finishing as the first runner across the line at Brockenhurst’s parkrun. 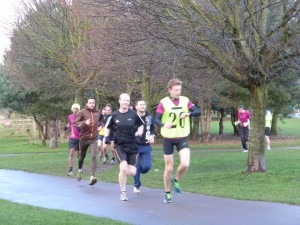