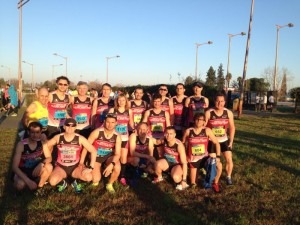 572 souls ran the Poole Parkrun on Saturday 1 March, of whom one, Karl Welch, who was fourth, was a BAC athlete. In Bournemouth, the total completing the Parkrun exceeded 200, and in second place the ‘unknown’ is thought to be Emma Dews – perhaps there was a scanning problem at the finish.  (Update about Emma – the results have been amended to show that Emma WAS the second finisher and first lady, running a Parkrun PB and breaking her own course record.  Furthermore Emma was Parkrunner of the Week and there is an article about Emma on the Parkrun website – see www.parkrun.org.uk/bournemouth and click on ‘News’.)  Also running in Kings Park were Duncan Wells, Roy Long, Ian White, Jud Kirk, Steve Cox, Joe Price, Ian Graham (1st V65 and Parkrun PB!), Paula Kirk and Will Price. Meanwhile, in Denmark, Billy McGreevy was running one of three Parkruns in Copenhagen, finishing 3rd in 17.59 – an appropriate way to celebrate his 50th Parkrun! A Facebook photo of Billy shows him (in his BAC vest) running totally alone, causing some sceptic to query whether there were only four competing! However it can be reported that a total of 67 completed the run.  A Parkrun result missed earlier was the Weymouth Parkrun on Saturday 22 February in which Club Captain Simon Munro was 2nd of 89 competitors.

Nearer to home, the next day, Steve Way continued his 100k training by running the Reading Half Marathon in a time of 1.08.35, consolidating his position at the top of the Championship Table. Steve was 27th of a total field of 14,261.  Also running at Reading were Rob McTaggart, 82nd in 1.13.20, Manol Dimitrov, 250th in 1.20.27 and Toby Chapman, 279th in 1.21.22.  On the same day, Sunday 2 March, three BAC athletes completed the Bath Half Marathon, namely Ian Habgood, 27th of a field of 11,176, in 1.13.23, Simon Way, 69th in 1.17.17 and Graeme Miller, 80th in 1.17.52. Simon‘s time was a PB by over a minute, and propels him to second in the Championship Table.
A week earlier, 23 February, Antonio Ruiz, who contributed so much to BAC last year, competing and coaching, during a stay in Bournemouth from his native Spain, ran an excellent debut marathon in Seville in 2.54.10, quite an achievement.  Antonio wore his BAC vest and says “when I wear this vest I feel full of beans and bring me really nice memories”.