Patrick Sylla offset some of the disappointment of not making it to the World Junior Championships in Cali, Colombia by jumping to victory in Gateshead on Saturday morning.

Patrick won the Intermediate Boy’s long jump with a jump of 7.12 metres. The commitment needed to reach this level is shown by Patrick and his coach, Zac Kerin, who took to BAC’s long jump pit in the early morning in the run up to the championships. This was due to Patrick’s event being scheduled to take place first thing on the Saturday morning. 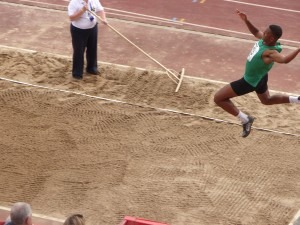 Patrick on his way to gold in the long jump

Although no other BAC athletes won a medal, all finished in the top 10 of their respective events. This reflects well on them and their coaches to be able to perform so well at the very top level in such a huge event. At least two had had injury problems leading up to the competition and had to adjust their training accordingly.

Danielle Broom in Intermediate Girl’s Hammer successfully negotiated her way through the qualifying round on Friday, coming 2nd in her pool with a throw of 52.54m. In Saturday’s final she came 5th with a throw of 55.26m. 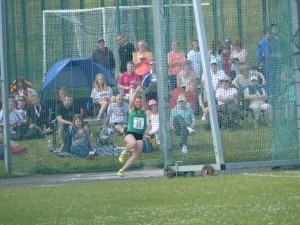 Danielle Broom in action in the hammer circle

Angel Kerin, having had to adjust her training due to recent injury, recovered sufficiently to be able to compete and finished a commendable 7th in Senior Girl’s triple jump, with 11.07m, just a little short of her PB. 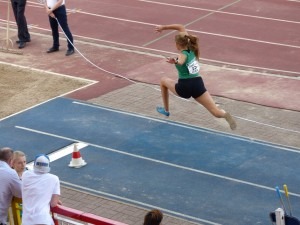 Angel Kerin in the triple jump

Jack Howlett was 8th in Intermediate Boy’s shot with a putt of 12.96m. Jack had also suffered from an injury leading up to the championships, so better luck next year. 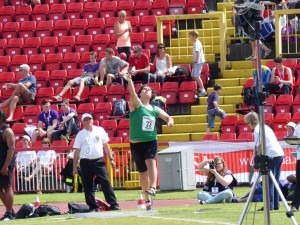 Jack competes in the shot

Ben Dickinson finished 9th in Intermediate Boy’s javelin with a throw of 53.46m.

Madeleine Smith, in her first appearance at the championships, came 10th in Intermediate Girl’s triple jump with 10.78m (a little short of her PB of 11.04m). 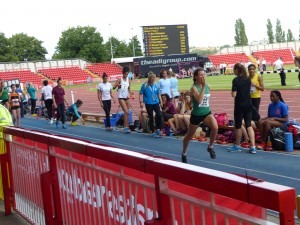 Madeleine competes in the triple jump

Because Dorset is a small county (population wise), it is classed as a Category C county in English Schools and allowed a maximum of only 25 athletes. Category A (such as Hampshire) counties have 60 athletes, and Category B 50. This limit on the number of competitors means the chance for Dorset to get a relay fairly rare. This year, Dorset had sufficient runners in Intermediate Boy’s to enter a team. Dorset finished 2nd in the final behind West Midlands by just 0.03 seconds, we presume Patrick Sylla formed part of the relay team. 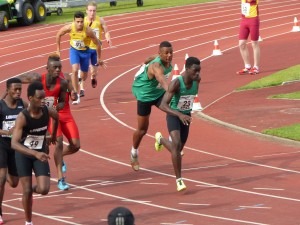 Patrick passes the baton in the IB 4x100m 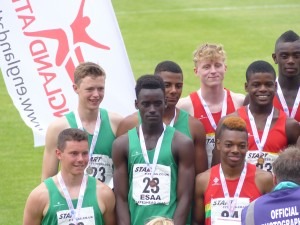 The seven BAC athletes will have all contributed to the points with their top 10 finishes counting towards a place in the Category C Counties Cup (at the time of writing, we are unsure how Dorset fared overall). Well done to all!