Paul Consani shows will to succeed at Ironman Vichy 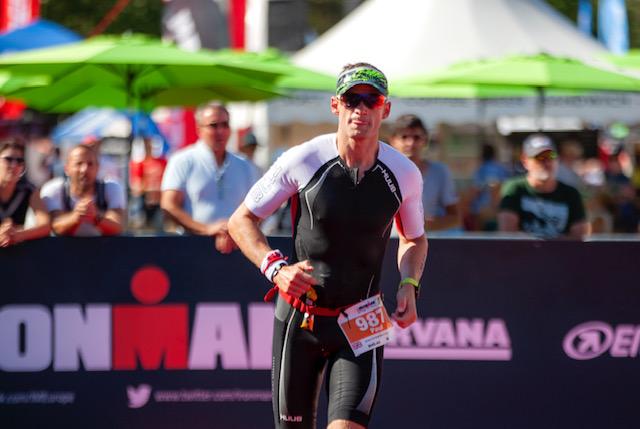 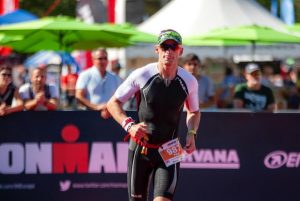 In what was without a doubt his biggest challenge yet, Paul Consani went over the France to take on the Ironman Vichy where he faced a 3.8km swim, a 180km cycle and then a marathon

Running a marathon is enough of a challenge on its own for most people. The months of hard training, high mileage and long Sunday slogs make it a testing task, both physically and mentally. Then when that’s over, there’s the pressure of having to produce the goods on race day and to press on through all the pain and suffering. It’s always a difficult challenge.

Imagine doing it after a 3.8km swim and 180km bike ride though. Now that is a challenge. And that’s the task that Paul Consani had ahead of him when he signed up for the Ironman Vichy.

That meant not only did he have to train to run a marathon, he had to fit in a lot of cycling and a lot of swimming as well. It was a big ask, but Paul was determined to do it and was prepared to put the work in a dedicate the required time to do it.

Having competed in triathlons for quite some time now, Paul has been becoming gradually more adept at all three disciplines and the building up the skills required to effectively combine the three together.

He’s always been a strong runner so that comes fairly naturally to him, provided he can stay injury free for a period of training. His cycling has been improving a lot over recent times and is becoming something he’s pretty adept in and feels comfortable with.

The swimming would definitely be his weak point, but in a way, that works quite well in triathlons, as by the time he’s done the swim, he’s often quite far down the field which means he then tends to be catching and overtaking other competitors throughout both the cycle and the run.

Vichy is thought to be one of France’s most luxurious locations, although perhaps not so much if you’re doing an ironman there. It’s healing waters and thermal springs have seen visitors flocking to the Auvergne spa town in the past and it has retained it’s reputation as a health retreat to this day.

Of course, Paul wasn’t there to relax though. In fact it was quite the opposite. He was going to be putting his body through, quite possibly the biggest strain it had ever been under.

The course featured a swim in the beautiful Lac d’Allier and a bike ride through the regions of Allier and Puy-de-dome , boasting spectacular views of the Montagne Bourbnaisse and the Volcanoes of Auvergne. The run route headed along the banks of Lac d’Allier and through the historic town centre where hoards spectators lined the streets to cheer the competitors on.

Paul was a little nervous going into the event as he’d been suffering from a niggling shoulder issue which had prevented him from swimming for the past three weeks.

The swim began before the sun came up so it was dark and the water was murky, meaning Paul could hardly see the Garmin on his wrist which was about the record its longest session ever.

The first half of the swim was with the flow of the river which was great, but on the flip side, it meant that the way back would be head on into it. That makes it very tricky when you’re not blessed with great swimming form.

It was Paul’s first attempt at a full 2.4 mile swim though so he was really just glad to get through it and move onto the disciplines he felt more optimistic in. Completing the swim in a time of 1 hour 26 minutes and 50 seconds, Paul quickly hopped onto his bike and took off hoping to make up for the lost ground. However, he did get a bit more than he’d bargained for in the bike leg.

The main reason he’d chosen the Ironman Vichy was that it was renowned for having a fast, flat bike course. After he’d entered though, they announced a new cycling route to celebrate the fifth anniversary of the race. That meant that instead, Paul would have a the pleasure of doing three laps up and down a dormant volcano with a total of 7,000ft of elevation. How kind of them.

There were some long, energy sapping climbs and the descents were bumpy and twisty. There were hardly any flat sections to enjoy making it extremely tough going.

Unfortunately it turned out to be the hottest day of the week as well, hitting 35 degrees by early afternoon. As a consequence, Paul found the bike leg a lot tougher than he’d hoped for. His power was down about 30 watts in comparison to all his long, easy-paced training rides and his average heart rate was 15 to 20 beats higher. Both of those he puts down to the heat.

Completing the 112 miles in 6 hours 26 minutes and 59 seconds, Paul had finished up about an hour down on his A-plan which was a bit of a blow. He got off the bike and put his trainers on, then 6 minutes later he was setting off on his marathon. 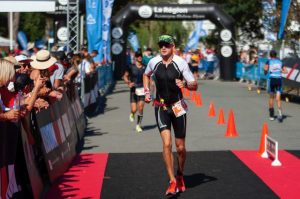 Feeling a touch weary after his long bike ride, Paul sets off on his marathon run

As anyone who has ever run immediately after a hard bike ride will know, the legs can feel horribly tight and jelly-like when you first get going. Knowing he still had 26 miles to cover on heavy and unresponsive limbs was a rather daunting prospect. 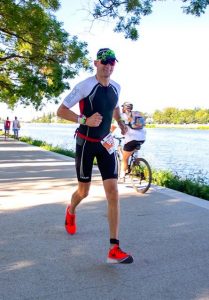 With the sun beating down, maintaining pace over such a long distance run was always going to be difficult after what had come before it

Within a few miles though they did actually start to feel a little better again. Then the real fatigue began to set in. The run route was pretty straight forward, heading along the banks of the lake with just a short climb to cross each bridge at opposite ends of the course. 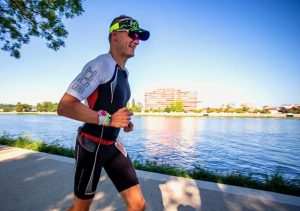 It was a four lap course which presented plenty of opportunities for Paul to see his family who were there supporting him. There were also cold water showers in each of the many aid stations which helped him keep cool in the intense heat. 35 degrees was the hottest temperature Paul had ever run in, let alone raced in and when in the direct sunshine it was even hotter. 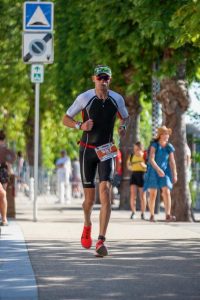 The fluids, energy gels and electrolytes that Paul took on board seemed to work well for him on the day and despite the conditions, he managed to stick pretty close to his target pace, aside from the odd walk through the aid stations towards the end. 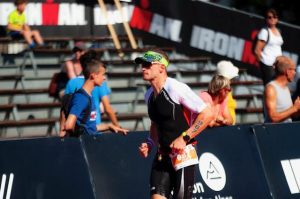 Finishing the marathon in 3 hours 49 minutes and 20 seconds, Paul had done it. He’d managed to complete the full ironman and that, in itself, was a fantastic achievement.

His overall time for the ironman race was 11 hours 55 minutes and 26 seconds, which put him in 397th place in the final standings. That was out of 1,240 who successfully completed the race and several others who didn’t manage to get through all three disciplines. 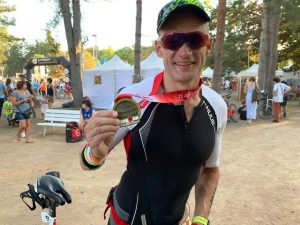 It was a decent result for Paul although it was a good hour off what I had been hoping for. That was mostly down to the bike ride though to be fair and the fact it was a lot tougher than he’d originally anticiapted.

Given the couse, the conditions and all that could potentially have gone wrong, he can be fairly chuffed with the outcome. With a kinder course though, Paul feels he’s got one in him that is considerably quicker so it may well not be his last full ironman.

That will hopefully be some way down the line though. For now, it’s time to kick back, relax and reflect on a truly remarkable achievement. It’s the ones you work hardest for that are the most rewarding and Paul certainly put everything he’s got into this race and deserves huge plaudits for his efforts. 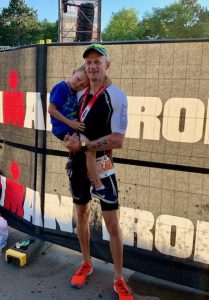