Pete Thompson goes some in Gosport Half Marathon 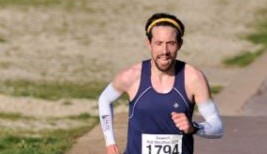 Over recent years, the name Pete Thompson has become more synonymous with charity work than top level competition. Not that that’s a bad thing. He raised £23,000 for mental health support and awareness for running 44 marathons in 44 days. One in each of the 44 European countries.

A year later, he went on to run the entire route of the Tour de France in 68 days, averaging 30 miles a day, to make a total of 2,082 miles. The route also incorporated the high mountains of the Alps and the Pyrenees and Pete raised over £27,000 off the back of that challenge.

As one would expect, it takes a while to recover after putting the body under that type of strain. Slowly but surely, Pete has been bringing himself back into the fold since then.

At one stage he was a 2:25 marathon runner, so has been up at the top echelons of amateur athletics. His goal now though isn’t necessarily to get back there. It’s now more about just simply enjoying his running and seeing where that takes him. And helping others to enjoy their running and get what they want out of it too.

Over recent times though there have been a few glimmers suggesting that Pete may again be destined to hit those heights again. In the Sturminster Newton Half Marathon, Pete turned up the day after coming in as first finisher at Bournemouth parkrun and recorded an excellent time of 1:21:27.

That could’ve been seen as an announcement that, in no uncertain terms, he was back on the scene. A month later he was again back in road race league action for Bournemouth AC at the Littledown 5, looking notably strong as he coasted to a 28:14 finish.

It wasn’t just the times he produced in those races that were the telling factor, it was the way he ran them, starting off steadily and then gradually building up the pace and moving through the field. It was definitely shades of the Pete of old.

For his latest challenge, it was time for Pete to step things up a notch as he took to the start line for the Gosport Half Marathon. The Gosport Half Marathon is notorious for being pretty flat and fast and was one of the designated Hampshire Road Race League fixtures which meant a high standard of competition.

The route featured two laps which went all the way along the seafront at Lee-on-the-Solent. Conditions on the day were ideal so for anyone in shape to secure a fast time, it was well and truly game on.

Starting out at around 5:45 pace, Pete soon began to move through the gears. From the fourth mile onwards he managed to hit under 5:40 pace for every mile. It was a very impressive level of consistency and a masterclass of even-pacing.

The only time he really slowed down was in the lead up to the finish when he took the time to enjoy and savour the moment as he approached the finish.

Completing the course in a stunning time of 1:14:10, Pete crossed the line in 10th place out of 1,669 runners. That gave him an average pace of 5:39. It was a truly magnificent display from Pete and put him firmly back on the map in regard to top level running on the local scene.

The race was won by Daniel Eckersley of Kingston AC and Poly Harriers in a time of 1:09:39. Eliot Robinson followed in shortly after to take 2nd place in 1:09:54, with Max Costley of Southampton coming in 3rd in a time of 1:10:14.

As well as getting in some good training over recent months, Pete has been busy launching his new business where he offers services such as sports massage therapy, coaching and motivational speaking. 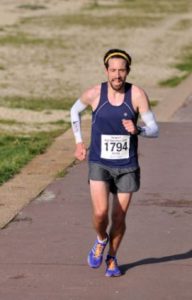