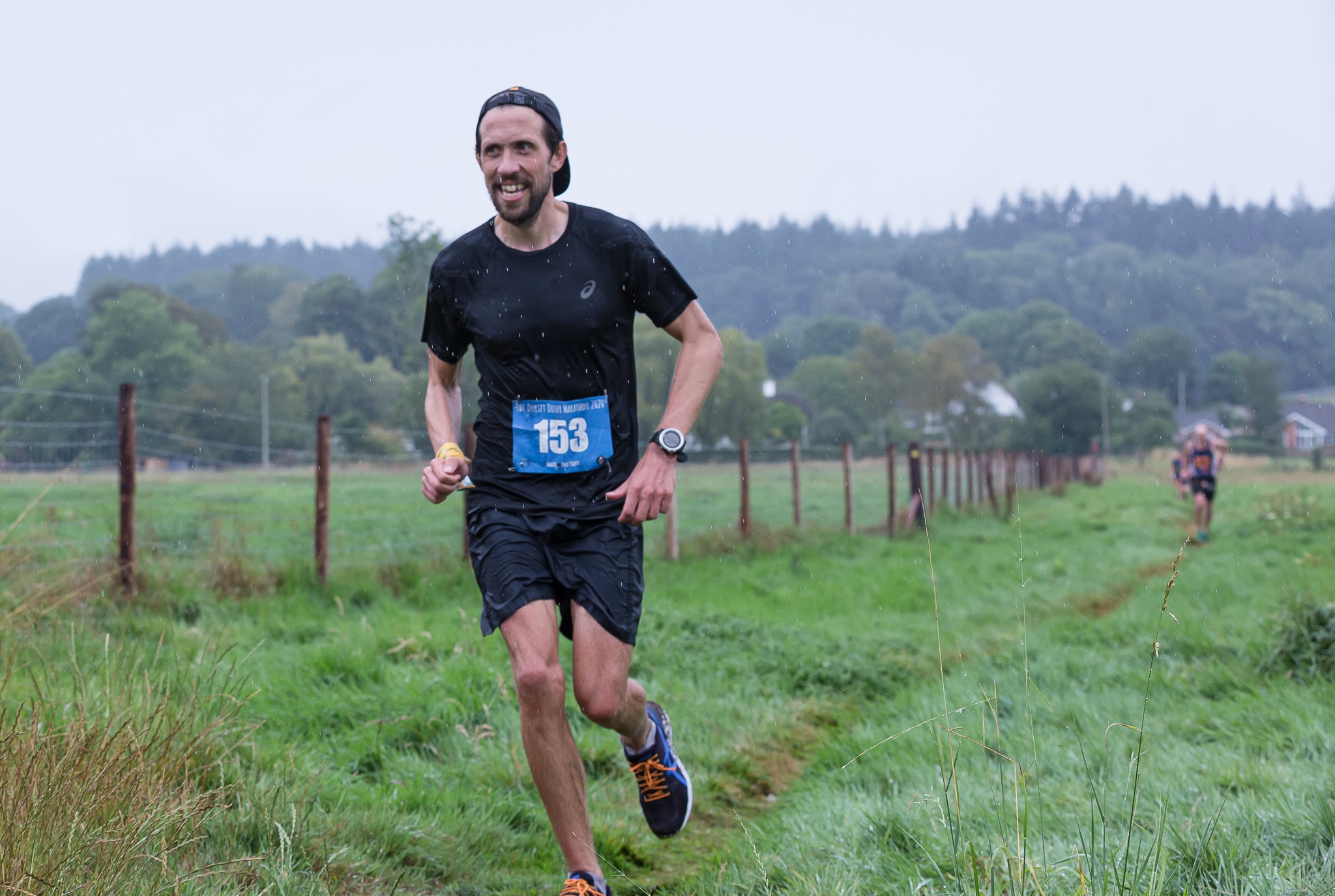 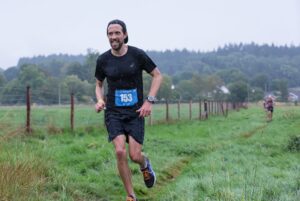 Taking to the trails for the first time since the coronavirus pandemic struck, Pete Thompson jumped in at the deep end when he entered the Dorset Ooser Marathon

What better way to announce the return of the running race scene than with a testing, turbulent trail marathon in the throws of deepest darkest Dorset, complete with hills aplenty, masses of mud and wonderous woodland tracks that never seem to end.

The was the offering from Badger Trail Events when they bravely stepped up to host the Dorset Ooser Marathon and Half Marathon and in the current climate of Covid-19 related restrictions, that was no mean feat.

The event had originally been scheduled for March but was postponed after the pandemic forced all forms of mass gatherings off the agenda.

Of course, the pandemic has since brought about a fundamental change the way we live our lives which has in turn led to the vast majority of event organisers being compelled to cancel their rescheduled race dates as well.

Where there’s a will there’s a way though and Kevin and Denise Day who run the Badger Trail Events company were determined the Dorset Ooser races should go ahead and worked tirelessly to make it happen.

That meant introducing staggered start times and ensuring social distancing rules were observed wherever possible. Runners were sent off in groups of six and had to wear face masks right up the moment they went on their way.

It was certainly a little different to the crowded, claustrophobic, scrambling starts we’re used to seeing in races but ensuring sporting events operate in as safe an environment as they possibly can is paramount at the present time.

Last year’s Dorset Ooser Marathon was won by Bournemouth AC‘s very own Jacek Cieluszecki. He stormed to an emphatic victory, being the only man to complete the course in under three hours. In fact, no one else got anywhere near three hours.

In this year’s edition it was Pete Thompson who threw his hat into the ring. Well, actually he kept his hat on, but that’s another story! Pete had originally expected to do the race back in March but of course, that didn’t happen. He was destined to get his chance in the end though.

Back in March Pete was already hitting some very good form which saw him finish 5th in the Wimborne 20 and take the trophy for 1st MV35. Little did he know then that that would turn out to be his last race for such a long time.

Over the lockdown period he’d faced the same challenges as everyone else, trying to stay motivated and maintain that high level of fitness without any clear and obvious goal to aim for.

He’d managed it well though and had been registering some very impressive long runs over the past few months and was looking in good shape. The Dorset Ooser Marathon would certainly put that to the test though.

Famed for his amazing fund raising challenges, which, in some cases, captured the attention of the national media, Pete has collected vast sums of money for the mental health charity Mind.

There was of course, the 44 marathons in 44 days, where he travelled around Europe completing a marathon in each different country. Then following on from that there was the one where he ran the ran the entire route of the Tour de France in 68 days, averaging 30 miles a day.

On the day that he would have been running the London Marathon had it not been called off, Pete again demonstrated his fund raising idea creativity by attempting to run 2.6 miles backwards in under 26 minutes. Like with his other challenges, he was indeed successful, but it was a very close call and he really had to dig deep.

At the Dorset Ooser Marathon, he now had the chance to see what he had in his locker in a very tough, off-road environment. It was certainly going to different to the fast, flat roads he’d been used to from his previous racing days.

Also being a high acclaimed running coach, Pete is usually a master when it comes to race plan and strategy. He tends to start off at a steady, comfortable pace and then gradually pick it up as the race progresses. That’s exactly what he did at the Wimborne 20, gradually working his way towards the front of the field.

Having not raced for so many months though, even Pete found himself getting a touch over exuberant at the start of the race, but that was almost unavoidable under the circumstances.

The hills start immediately on the Dorset Ooser course and they do not relent until the end so it’s definitely one where a supplement of energy needs to be conserved.

Pete was going for it though and taking no prisoners. By the time the third mile had elapsed he was in lead and continued to press on from there.

Despite the hills, Pete had completed most of the miles up to mile seven at around 6:20 to 6:30 pace. Had he burnt himself out too early though, that was the question?

Some tough hills over the next forced him to slow the pace a bit but a couple of nice downhill stretches on the 11th and 12th miles saw him get back up to speed. 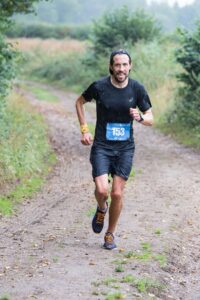 At the half way stage it was so far so good for Pete and his lead at the front of the field was growing progressively. He didn’t relent though and continued to attack the hills with vigour and gusto.

Not prepared to just settle for the race win, Pete wanted to continue giving it all he’s got and see how quickly he could go. Managing to stay remarkably strong over the second half of the race, it was only at mile 24 where he really started to find it tough.

The hill on that mile took a lot out of him but he was hoping he’d be able to cruise home after that. That was not so though and he was cursing his luck as he turned the corner to be greeted with one more big hill before the finish.

Being forced to swap running for walking over the last bit of the climb, he made it up nonetheless, crossing the finish line in a remarkable time of 2:59:40. 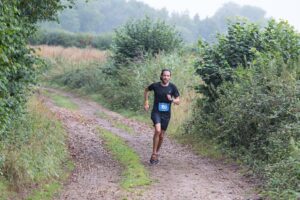 It was a quite magnificent victory for Pete, and a fairly comprehensive one at that. Almost eight minutes went by before the runner up emerged on the horizon.

That was Robert Eaton of South Derbyshire Road Runners. He got over the line in a time of 3:07:37. Then it was Philip Macgregor who took third place in a time of 3:11:37.

Kieron Mumford of Lonely Goat was the only other man to come in in under three-and-a-half hours. He posted a time of 3:27:08, giving him the Male 45-49 crown.

Over the course of the race, Pete wracked up 2,454ft of elevation which gives some indication of just how tough the Dorset Ooser Marathon is. With its 13 testing climbs to overcome, seven stiles to clamber over and two fords to cross, it isn’t one for the faint hearted. 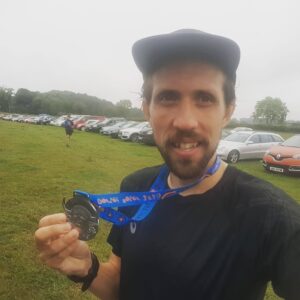 Meanwhile, in the Half Marathon race it was Robert Doubleday of Poole AC who showed he hasn’t lost any form over the lockdown period, picking up the win in 1:24:16. Sam Davis took second place in a still very good time of 1:26:29.

For Pete though, it was not all about the winning. He classes the enjoyment of running as the most important thing, along with the massive mental health benefits that it brings.

After the race he was full of gratitude towards Kevin and Denise and all the team at Badger Trail Events for overcoming so many hurdles and putting on such a hugely successful race under very difficult circumstances. 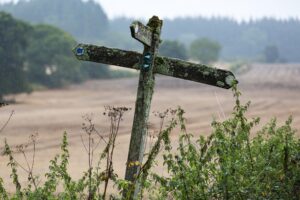 Special shout out to Dorsetbays photography who gave up their services for free, asking for donations to a local foodbank in return