Peter Thompson and Billy McGreevy team up in Lychett Relay 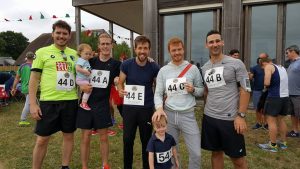 Three Bournemouth AC members featured in the Lychett Relays over the weekend, with Peter Thompson and Billy McGreevy forming part of the “Marathons for the Mind” team and Sanjai Sharma being drafted in as a late replacement for the Hamworthy Harriers Kings team.

The event was organised by Lychett Manor Striders and the race featured teams of five people with each team member completing one lap of the 5k course. The winning team would be the fastest accumulated time once all five have finished. There were separate categories for Mens, Ladies, Mixed and Juniors. 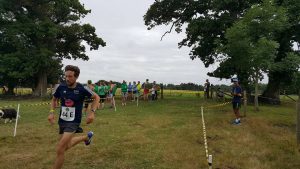 The course was a lovely scenic route round the Holton Lee grounds at Holton Heath. It was entirely off-road, with surfaces consisting of heathland footpaths, grass and a short stretch of tarmac.

Billy and Peter were in a Men’s team with three others. Billy kicked things off with a very quick leg, clocking a superb time of 17:41. He then passed the batten onto Leigh Genco, who was then superceded by Gareth Hale and Nigel Halligan. 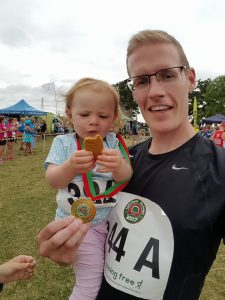 Billy and his daughter Grace, who is replenishing the calories with a biscuit after her hard-fought Minithon

Peter Thompson ran the final leg for team “Marathons for the Mind” and put in another very fast lap, registering a time of 18:13. This shows Peter has recovered well from his incredible 44 marathons in 44 days adventure across Europe and it hasn’t put him off running at least, which is good news for BAC. 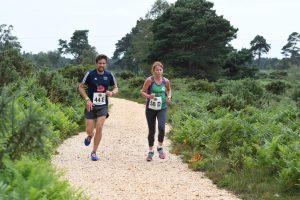 This put the total combined time for “Marathons for the Mind” at 1 hour, 46 minutes and 55 seconds. They were the 11th fastest team overall and 8th best men’s team.

Sanjai ran the first leg for his team and put in another very strong performance, completing the course in a time of 18:23. Once the other four Hamworthy Harriers Kings had finished their laps, the total combined time was 1 hour 48 minutes and 50 seconds. This put them in 15th place overall and 10th best men’s team.

The event had a real fun and inclusive feel to it, with the participants encouraged to bring friends and family along to socialise in the lovely surroundings and enjoy some drinks for the bar, as well as a barbecue and home-made cakes. There was a disco later in the evening and even camping available on site. 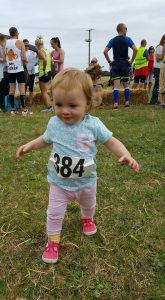 Billy’s daughter Grace looks a real natural in her first ever race. She must take after her Daddy

As well as the showpiece relay race, there was also a Minithon, for the kids. This enabled Billy’s 15-month-old daughter Grace to take part in her first ever race. She seemed to be a natural, so this could well have been the launch of a budding BAC career. In fact, Billy says they are targeting the 2036 Olympics, so watch this space!

Billy, Peter and the rest of team “Marathons of the Mind” really enjoyed the race, and the event as a whole