Simon Munro features at the start of the Poole 10k

The day before, Saturday 6 June, Toby Chapman competed in his first Ultra Distance race – and won!  The race in question was the Dartmoor Discovery, of which competitors are warned: “You’ll experience everything Dartmoor has to offer…………including unpredictable weather and those infamous hills”. The course is 32 miles long, involving 1363m of climbing, and Toby‘s winning time was 3 hr 51min 41s.  Of the race, Toby says: “It was tougher than planned with no food taken on board, but good fun!”  BAC seems to be developing a strong Ultra Distance squad – in addition to Toby, Steve Way, Jon Sharkey and Pat Robbins have produced some excellent Ultra results.  Well done, Toby, on this amazing performance! 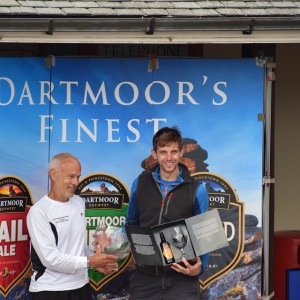 One series of races so far overlooked has been the Poole Runners Summer Series, at Upton Park.  The first race, on Wednesday 13 May, was won by Peter Thompson, and on 27 May, the second race, Ross Smith was 12th.  The change of day to Wednesday appears to have been a success, with 150 finishing on 13 May, and 190 on 27 May, on which date, of the 53 finishing the Junior race, BAC‘s Josh Monks was 53rd.

Of course, there are the Parkruns!  On 6 June, BAC athletes competed only in the Bournemouth Parkrun, with Paul Hill finishing his customary 2nd, joined by Nikki Sandell (1st Lady), Steve Cox, Jud Kirk, Damian Boyle (perhaps returning from injury? – Damian‘s time was 8 minutes over his PB) and Will Price.  396 runners completed the event.