Puddletown Half Marathon proves to be anything but a Plod 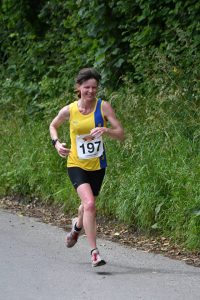 The Puddletown Plod didn’t quite attract the same level of attention this year as it did last year when BAC athletes dominated the standings taking five out of the top six places, including a top four clean sweep for Steve Way, Jon Sharkey, Paul Dixon-Box and Peter Thompson. That said, this year’s batch still managed a very successful outing, scooping numerous prizes between them.

Although Bournemouth did not have a victor in the mens’ race this time round, they did have a winner in the female stakes, with Nikki Sandell claiming that honour in a super quick time of 1:32:20. This put her 3 minutes and 22 seconds ahead of the second placed lady. She was 35th overall in a field of 215 finishers and it was a 22 second improvement on her time last year when she finished 3rd woman. 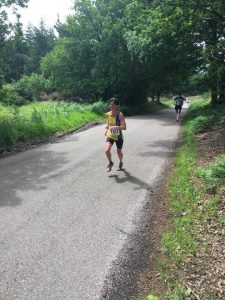 Nikki shows the rest of the ladies the way. The only problem was, they were too far behind to see!

Sanjai Sharma also took home some silverware, winning the m50 category with a terrific time of 1:24:19. That put him in 9th place overall and was a pretty good return for Sanjai given that this was the furthest he’d run since the London Marathon back in April.

Sanjai had been hoping for a around 1 hour 23 minutes and was on course to achieve that until he got a stitch in the last two miles. Unfortunately Sanjai doesn’t seem to be having much luck in the latter stages of races lately, having been struck down by cramp in the final stages of the VLM.

It was still only 3 and a half minutes off his PB time of 1:20:53 from last year. This was when he was in his very best form and finished in 6th place. 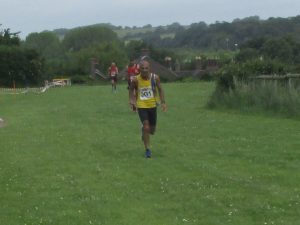 Yvonne Tibble kept up that winning theme by taking 1st place in the f50 category with a time of 1:42:47. Yvonne has been on quite a streak of late, also claiming a category win at the Poole 10k the previous week, as well as finishing 1st overall woman in the Imperial Series earlier in the year.

It was a surprising success for Yvonne who wasn’t overly confident going into the race having not managed to do as much half marathon training as she would’ve liked. In fact, 10 miles was the furthest she had gone in the lead up to the race.

The first eight miles of the run went smoothly for Yvonne but it got tough from there on in. Nevertheless, Yvonne rallied well and was 8th lady over the line on the day and finished 74th overall.

The conditions were okay on the whole, although it was a fairly warm day and there was a light breeze. The course is undulating in places which can make it quite tough going. One man who does usually enjoy hilly races is Jud Kirk.

Jud was hoping for a time of around 1 hour 32 minutes and was expecting to at least get under 1:35. Unfortunately it didn’t go quite as planned and he found himself slowing considerably as the race went on. The last five miles in particular were a real struggle but he persevered got to the line in a still very respectable time of 1:36:06. This put him in 49th position overall and 10th in the m50 category.

The only real downside was that the Puddletown Plod is a Dorset Road Race League fixture but sadly due to only fielding two men and two ladies, BAC won’t actually get any points for the team competition. Hopefully the turnout will be better for the remaining DRRL races.