Purbeck 10k, Parkruns and Steve Way in Hackney Half Marathon 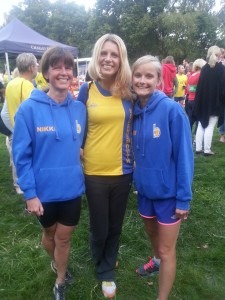 More successes to report, particularly to our Ladies’ team of Emma Dews, Gemma Bragg and Nikki Sandell for their wins and to Manol Dimitrov for his spectacular run at the Purbeck 10k, and to Jacek Cieluszecki for his 50th Parkrun, achieved in style.
The Purbeck 10k on the evening of Friday 20 June was definitely one for BAC‘s ladies, with Emma Dews winning the ladies’ race outright (and finishing 22nd of a total of 431), supported by Gemma Bragg (2nd Lady overall) and Nikki Sandell (4th) to win both the open and the Dorset Road Race League races. Furthermore, Emma, Gemma and Nikki were all winners of individual age category trophies. The fact that BAC had ‘back-up’ in the ladies’ race, namely Cherry Sheffrin, Caroline Rowley and Helen Ambrosen shows how far we have come in the last year or two. Well done to all!
BAC‘s mens’ team in the Purbeck 10k was unfortunately weakened by injury and other commitments, but Manol Dimitrov stood out with an excellent run to finish third overall, and to win yet another trophy for BAC. Manol was supported in 7th place by Jez Bragg (soon to be running another challenging Ultra distance race, this time in the USA), and in 14th place by Paul Hill. Paul has just signed for BAC, having been prominent for some time in the Parkruns, and there is no doubt that Paul will be a very useful asset to the club. Sanjai Sharman and Steve Cox completed BAC‘s team for the Road Race League.  Although not up to date, the Road Race League table is looking very healthy for BAC, with the Mens‘ and Ladies‘ teams both top of their respective Division 1, and the first five individual places all occupied by BAC athletes, namely Steve Way, Jacek Cieluszecki, Jon Sharkey, Jez Bragg and Toby Chapman.

Turning to the Parkruns, in Poole Park on 21 June, Jacek Cieluszecki was the winner of the Poole Parkrun, and completed his 50th race, thus winning the coveted red T shirt. All of Jacek‘s Parkruns have been in Poole, and he has won 34 times, a ratio of 2 wins for every 3 appearances. Jacek‘s PB is 15.08 and he has never finished below 7th! Also running in Poole on the same day were Simon Munro, 3rd, Joe Arundel, 4th, Peter Thompson, 7th, Paul Consani, 11th, and Billy McGreevy, 28th of a total of 511. Meanwhile, in Kings Park, Paul Hill was second in the Bournemouth Parkrun, and this after his excellent run in the Purbeck 10k the evening before, and following Paul in Bournemouth were Jud Kirk, Dave Parsons (only 31 seconds over his PB despite recovering from two recent holidays!) and Will Price. Another finisher, well up the field, was Alison Humphreys (Alison Barnes as was), and it is good to see Alison running again – and running well!  A total of 210 ran in Kings Park on 21 June.

The next day, Steve Way continued his preparations for the Commonwealth Games, soon to take place in Glasgow, by competing in the Hackney Half Marathon, in which Steve finished 5th (of almost 3000) in 1.07.14.  This was very shortly after winning the Littledown Marathon and was run, not as an outright race, but paced as part of an  overall plan leading to the Commonwealth Games Mens’ Marathon.  Details of the Hackney race, and Steve‘s general preparation can be found on his website www.steveway.co.uk which makes very interesting and instructive reading.  Steve‘s time at Hackney consolidates his position at the top of the BAC Half Marathon Championship table, propelling his age-related percentage to over 90%!