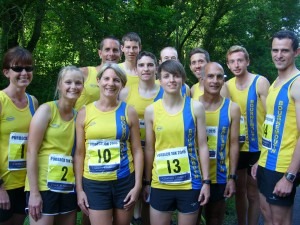 The BAC squad ready for the Purbeck 10k 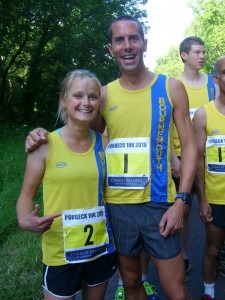 Gemma Gragg points out that Steve Way is, indeed, number 1

As already mentioned, Steve Way was the winner of the 20k Puddletown Plod on 14 June, completing the course in 1.09.03. This race is run on an ‘undulating’ (in other words, hilly) course, and Steve appears not to have been under particular pressure, as he was the clear winner.  Steve was first of 132 finishers.

There were some excellent BAC performances in the Parkruns on Saturday 20 June, the Bournemouth Parkrun being dominated by our youngsters.  Of a total of 370 finishers, Brandon Meredith was 6th, and Seb Hearn was 9th, both running PBs.  Abigail Richardson, JW11-14, ran the Parkrun for the first time, and Freya Waddington, JW10, ran a PB.  Over at Poole, of 623 who finished the Poole Parkrun, Graeme Miller was 65th.  Meanwhile, at Weymouth, Simon Munro, after his impressive run in the Purbeck 10k the previous evening, won the Weymouth Parkrun, leading 227 finishers across the line.  The first ever Parkrun in Salisbury took place a week or two ago, and Andy Gillespie was there, running his first Parkrun.  The Salisbury Parkrun has quickly become established, with 185 finishers on 20 June.