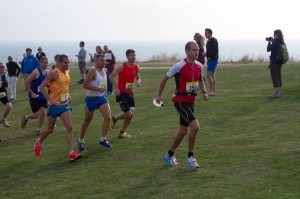 Steve Way (No 1, of course!) at the start of the Purbeck Marathon

Two BAC athletes competed in the off-road (and described probably correctly as the most scenic in the country) Purbeck Marathon on Sunday 14 September, namely Steve Way, who was 2nd in 3.01.40, and Jon Sharkey, 5th in 3.16.24. Steve has won this race twice in previous years, in times faster than the winning time this year (3.00.49 by Matthew Bennett of Southampton AC), and, no doubt, was running this year’s Purbeck Marathon at a pre-determined pace as part of his training for the 100k World Championships later this year. “Scenic” very often also means “hilly”, which is certainly true in the case of the Purbeck Marathon, so Steve and Jon can be congratulated on two excellent performances.
On the previous day, of the three local Parkruns, BAC was represented only at Bournemouth. The Bournemouth Parkrun, every Saturday in Kings Park, now regularly attracts over 200 participants, and, of the 270 who ran on 13 September, Simon Way, competing in this event for the first time, was 3rd. In 11th place was Jud Kirk and in 18th was Steve Cox, followed further down the field by Mike Farrell, Ian Graham, Duncan Wells (and dog!), Dave Parsons and Will Price.  Paul Hill, a regular competitor and from time to time winner, was seen to be one of the helpers, scanning the finishing tokens.  Without volunteers such as Paul to carry out the various tasks each week there would be no Parkruns.