Racing returns with the Maverick Dorset 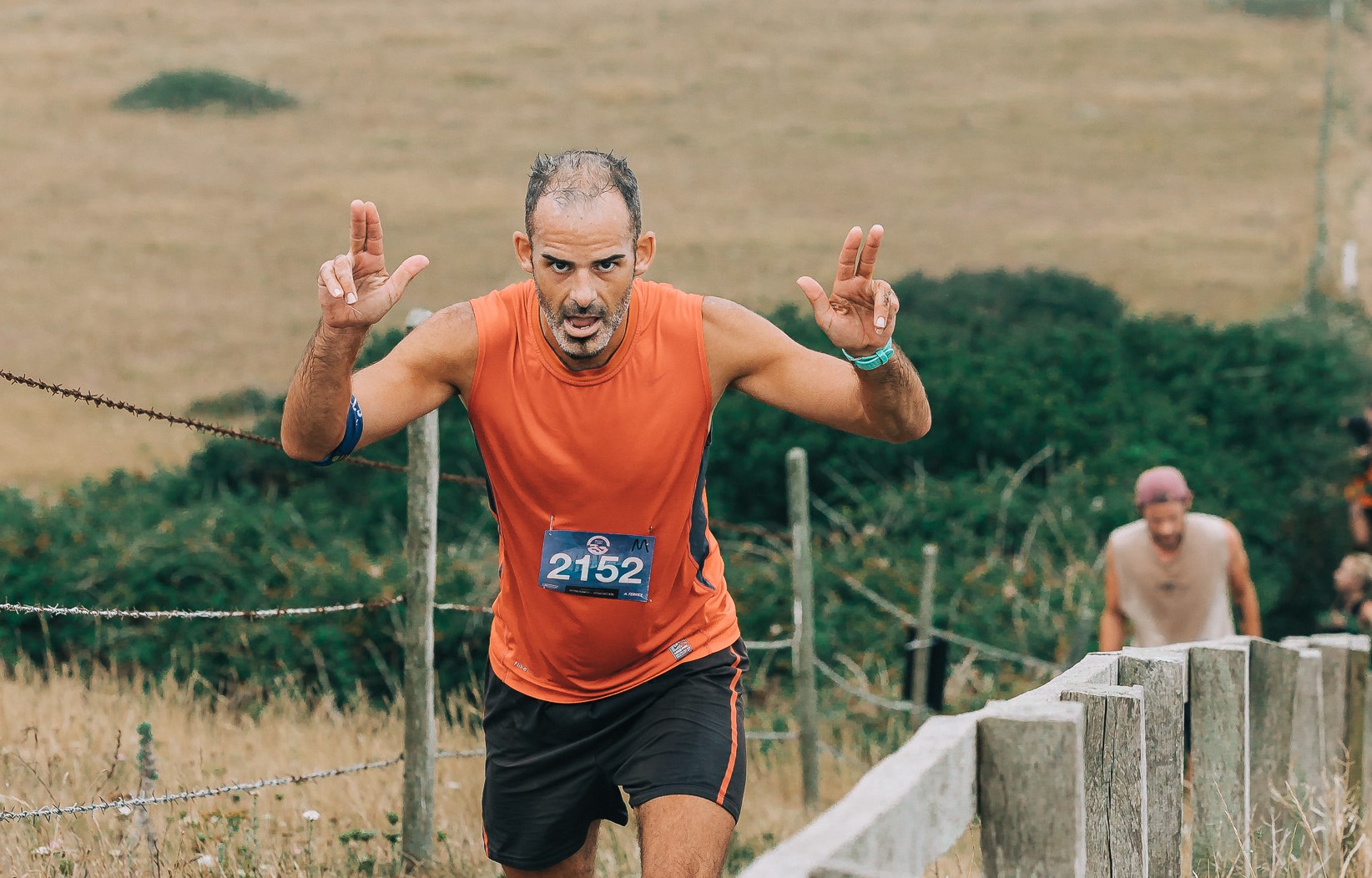 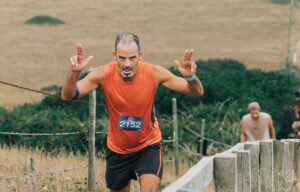 It had been around four-and-a-half months since lockdown restrictions came into play, forcing all forms of competitive racing off the agenda.

Over the course of that time event organisers and race planners had been searching for ways and means to get races back up and running in a safe and socially distanced environment.

It had proved a very difficult proposition and the inevitable cancellation of many high profile events ensued, including all big city marathons, some of which had initially been rescheduled for October.

It came as a welcome relief to many athletes when the go-ahead was finally given for racing to return in some shape or form. In the Dorset area it turned out to be Maverick who were the first to get an event scheduled in with an appropriate strategy in place and a Covid-19 considered plan approved.

Maverick events tend to consist of three different distances for runners to choose from, namely a Short, Middle and Long race. The challenge was of course to come up with an innovative way in which they could reduce interaction between participants wherever possible and ensure gatherings were kept to a minimum.

They did this by introducing a starting system where runners could set off in waves, dictated by their chosen timeslot. They could then start their races any time during the allocated duration for that particular wave.

The lockdown period had certainly brought about its own set of challenges to runners, with the initial restrictions forcing most to train on their own.

With the absence of group club sessions and hands-on coaching guidance, runners had to find their own motivations to keep training and maintain fitness levels.

Even when coached club sessions returned, there was then still the lack of any target races to aim for to provide the incentive to train hard and commit to the cause.

Despite all those challenges, Rob McTaggart and Rich Brawn had both managed to remain focused and stay motivated in training. As a consequence, they were quite pleased with where their fitness levels were at. The only frustration for them had been that they had no races in which to showcase that form.

Hence when they discovered that the Maverick Adidas Terrex Dorset Original event was actually taking place, they jumped at the chance to compete again.

With the race being staged along the rugged Jurassic coastline from Swanage, Tag knew it wouldn’t be a course the played to his strengths. He usually excels more in a fast, flat, road race environment. But beggars can’t be choosers and it was a competitive race, nonetheless, so it was worth a go.

Having already signed up to a 10k race the following weekend, Rich felt it would be a good way to get back into race mode and given the tough terrain, it would provide some good strength benefits for following race he had penciled in. 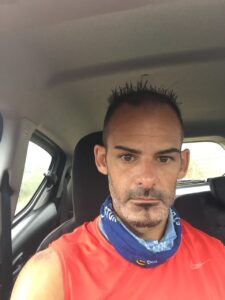 The location of the race village was Wilkswood Farm in Swanage. The three different distances participants could choose from were 8km, 16km and 24km. Both Tag and Rich had opted for the Middle distance, which was 16km.

Arriving with some of his mates from Twemlow Track Club, Tag started off in the second wave. Rich was scheduled to go in the third wave of the four. 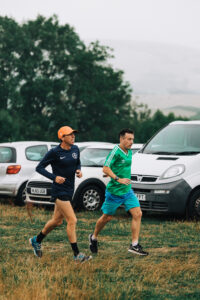 The starting procedure was very straight forward indeed. The runners simply just had to go to the start area at some point during the time span of their wave, pick up their number, pin it on and then head to the start line where they could set off individually or in pairs.

It wasn’t long before the climbing began, with the presence of a testing hill in the first mile that gave the athletes an early taste of what was to come.

The next couple of miles were fairly smooth sailing, or at least they should have been. There were a few undulations but nothing too excessive. The third mile contained a downhill stretch and that was where a harrowing moment for Rich occurred.

He was enjoying picking his way through the field and going past others who had started ahead of him and back-markers from previous waves.

Getting a bit over exuberant, he was tearing down the field on full throttle. The decline in the field seemed to gradually get more steep though and Rich soon found himself picking up velocity as his momentum carried him forward.

Suddenly realising he was travelling too fast he thought he’d better try and slow down. But he had no breaks!! Rather worryingly, he was completely out of control at this point and was hurtling towards the end of the field and knew if he kept going he’d have no way of stopping.

As the ground began to get blurry with the speed he was going at, the only way Rich could think of to stop was to throw himself to the ground, so that’s what he did.

Crashing to the deck on his left leg, it was a painful landing but he was grateful to have stopped without serious injury. He immediately bounced back and carried on, relieved to find that the only damage he had done was surface wounds. 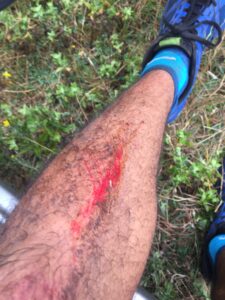 On the fifth mile there were some very steep steps leading down to a valley. Remembering his fall from earlier, Rich decided to take these very cautiously, just gently walking down. Any attempt to go faster could have easily resulted in calamity and he wasn’t prepared to risk that.

Then there was a very steep climb up the other side which most people were walking up. After losing so much time going down the stairs, Rich wasn’t prepared to be delayed any further and worked hard to get up as quickly as he could.

It was the first off-road race he’d ever done on the Purbeck though and after beginning to struggle a bit, he wondered if perhaps he hadn’t quite given it the respect it deserves and would pay for setting off so quick.

Then, on the sixth mile he came to another extremely steep downhill section with steps. Again, the only viable option was to walk down gingerly which took a fair while as it was a very long hill. Once he eventually reached the bottom, there was another massive hill with steps back up the other side.

Clambering up the steps as fast as he could, he could tell that the mile split for that one would be very slow. After that though, he managed to find some rhythm and thankfully, once he was on route back to the start/finish area, the remainder of the race wasn’t too taxing. 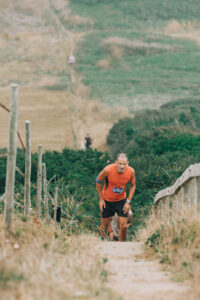 Some nice downhill stretches over the last couple of miles allowed him to claw some time back and after one final short climb through a wooded area, he saw the inflatable finish arch.

Going over the line in a time of 1:14:40, even though it was perhaps Rich‘s slowest time ever over a 10-mile distance, he was pleased with the performance given the toughness of the terrain.

Over the course of the race he’d wracked up almost 1,200ft of elevation and if you add all the lengthy descents with steps as well, it’s easy to see why it wasn’t one for a fast time.

As for Tag, given he had started in a previous wave, he had completed his ordeal quite some time ago. Suffice to say, it wasn’t a race he will look back on overly fondly.

He didn’t even have any trail shoes so that meant he was also restricted to walking down each set of steep steps and it turned out to be more a steady run than an all-out blast from him.

Crossing the line in a time of 1:11:23, Tag still ran it over three minutes faster than Rich and it would be enough to see him finish fairly high up the leaderboard. He didn’t enjoy his foray into trail running though and probably won’t overly keen to enter another race like that any time soon.

It was the Twemlow Track Club guys who dominated the race over the Middle distance though, with Brian Underwood posting the fastest time of anyone on the day, somehow getting round in 1:06:18. That was a mightily impressive feat, producing a time like that over such a difficult course.

Jack Galloway took the runners up spot, completing the route in a time of 1:07:23. Harry Lauste took third place, finishing in 1:08:15, with Steven Rigby getting fourth in 1:10:25. Tag was fifth in the overall standings and Rich was sixth.

The quickest lady over the Middle distance was Jenny Marshall, who finished 7th overall with a magnificent time of 1:14:53. A total of 146 people successfully completed the 16km race. 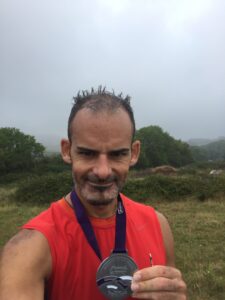 In the other distances, Daniel Eyre won the Short race in a time of 32:50, followed by Georgie Lambert who was second in 34:49 and Louise Fox was came third in a time of 35:21.

Over the Long distance, it was Toby Lambert who came out on top, putting in a brilliant performance to complete the 24km route in 1:42:51.

Although it won’t be one that Rich and Tag will remember for their spectacular performances, the race will be remembered by all those who took part as one of huge significance.

That significance is of course, that real racing is finally back. And, after such a lengthy hiatus without it, that will be a godsend for most competitive club runners. 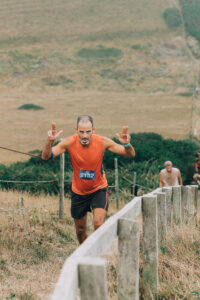