News travels slowly from Hampshire! On Sunday 12 July Tony Hunt flew the BAC flag in the Stansted Half Marathon in the Rowlands Castle area of Hampshire, not far north of Portsmouth. This event is a ‘Trail Race’, off-road, and Tony‘s time of 1.44.35 brought him over the line in 23rd position of 133 finishers.

The following week, 19 July, the BAC flag was again being flown, this time much further afield in Canada, where Steve Cox was once again running in the ‘Moose is Loose’ Half Marathon near Edmonton.  Like the Stansted HM, this is a ‘Trail Race’, but there the comparison ends.  Steve was running in temperatures of 20 – 22 degrees over a slow, twisting, lumpy course involving 2500 feet of altitude.  Steve was 2nd in his age group, and 15th overall (of a total of 266), in a time of 1.35.55.  Steve says that his consistent pacing (he went through 5k in 22.39, and halfway in 48 mins) has “raised confidence to beat last year’s 1hr 42 min in the Stur Half“.  Steve‘s Mum also competed in the event, in the 10k walk, and her achievement in winning her age group was only slightly marred by the fact that, due to a computer error, she didn’t receive her award on the day.  Never mind – well done to both Steve and his Mum!

Numbers finishing the Bournemouth Parkruns are now consistently well over 300, reaching 400+ from time to time.  On 18 July, of 361 finishers, Damian Boyle was 6th, 19th was Jud Kirk and, in a PB time, Joe Price finished 28th.  There was a strong BAC contingent amongst the 322 who finished at Bournemouth on 25 July, a race which was won by Roy Long with a PB time.  Simon Munro, Paul Hill and Damian Boyle finished 4th, 5th and 8th respectively, followed by Jud Kirk, Joe Price, who improved on his PB time of the previous week, Steve Cox and Alison Humphrey.  Meanwhile, over at Poole, of the 597 who finished the Poole Parkrun on 18 July, Graeme Miller was 14th, and of the 631 finishers at Poole on 25 July, Chris O’Brien was 13th.  Andy Gillespie is becoming a regular at the recently launched Salisbury Parkrun, finishing 38th of 177 on 18 July, and 27th of 185 on 25 July. 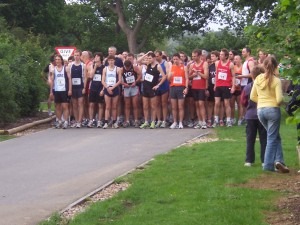 The photograph shows the start of a race at Upton (Half Marathon?) in 2006 or 2007.  Number 87 is Andy‘s son, who, at the time, was running 18 minutes for 5k and 38 minutes for 10k, before, unfortunately for athletics, in Andy‘s words, “discovering girls”!  Recognise anyone else in the photo?