Rich and Estelle make a splash in Puddletown Plod Half Marathon 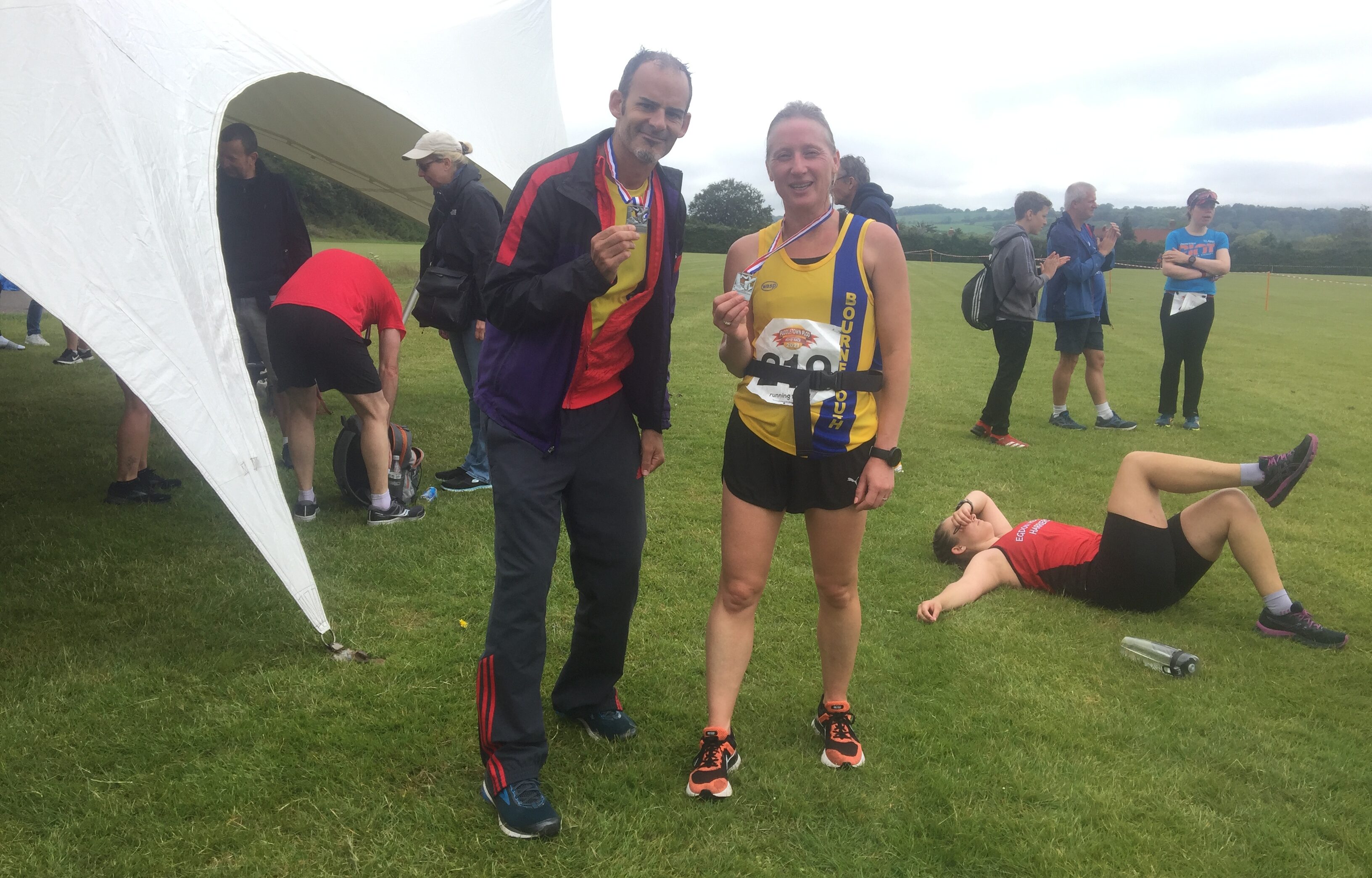 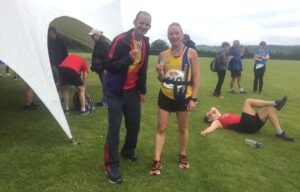 With no Dorset Road Race League in the equation for this year at least, local races have taken on a slightly different feel, with intense club rivalry being replaced by a more lighthearted sense of camoradary and togetherness.

In truth, after the past year and a half, most of the runners at the Puddletown Plod Half Marathon were just pleased to be pulling on their club vests again and engaging in some form of racing action.

And although there were no league points up for grabs, once the hooter sounded and the race got underway, the competitive edge was immediately revived in all the runners who took to the start line that day. And the adrenaline rush that one can only get from being in a proper race was soon coursing through their veins.

Just under 200 runners made the trip over to Puddletown to tackle the undulating road route, and among them were two Bournemouth AC members in the shape of Rich Brawn and Estelle Slatford.

Last time the Puddletown Plod Half Marathon took place it drew out a PB performance from Rich and the time of 1 hour 23 minutes that he produced was still his fastest time ever going into the 2021 edition. The question was, could he eclipse that this time round?

Managing to keep fit and stay motivated over times where there were no races, Rich felt he was in good enough shape to have a chance of beating that time so he was excited to give it a go. 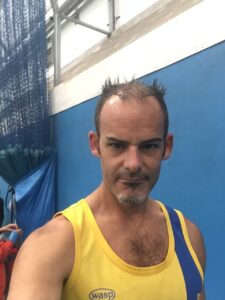 It was a little different for Estelle as she had been finding it tricky to get out and do as much running as she would like. With family commitments usually taking priority, she is always restricted in terms of what she can do and tends to just get out and train whenever she can.

It had been a while since she’d ran as far as a half marathon distance so she was anticipating find it quite tough going but nonetheless, she was looking forward to getting stuck in.

The race was started in waves, with the runners themselves asked to head for the pen they thought would most suit their ability out of the four. The faster runners went in wave one and the organisers took a note of which runners were in each wave as they started. Once one wave had set off the next one would line up and start a couple of minutes later.

Rich went in the first wave and it was a lap around the grass field at St Mary’s Middle School before they got out onto the course and let the games begin.

Four runners soon broke clear at the front of the race and they were Egdon Heath Harriers trio Matt Papa, Ben Foyle and Christopher Peck, and Ben Renshaw of Bridport Runners.

It was soon looking evident that they were much stronger than the rest of the field. That meant that Rich was fighting for 5th place at best. But he wasn’t too concerned about that. He main focus was on getting time by his standards.

Going through the first mile in just under 6 minutes, Rich found himself in the chase pack with Martyn Bell and Bruce Campbell of Egdon Heath Harriers and Matt Brown of Littledown. 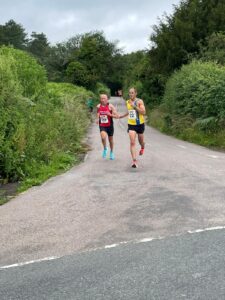 The second mile was a quick one as it was mostly downhill and Rich clocked a 5:47 for that one. Rich was still with Bruce and Martyn until they hit a hill in the third mile. That was when Rich began to extend away.

Very soon he was on his own and tearing down the scenic country roads at a  pace that even surprised him somewhat. But it felt good so he kept going.

For the next six miles there wasn’t really any notable hills and there were some nice downhill stretches which meant there was scope to keep the pace high. 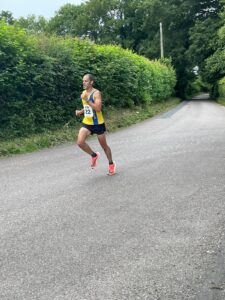 The only disruption to his momentum for Rich was when he got to the section where the road split off into a left and right. Having not listened to the race briefing properly, Rich wasn’t sure whether to take the left route which was down an off-road track or to stay on the road.

In the end he opted to stay on the road but looked behind him to check whether the others would follow suit. It was only Matt Brown behind him and he looked round to hear Matt shouting that he was going left.

Not wanting to risk heading off in the wrong direction, Rich decided to turn round and run back and take the left-hand path instead. He was now behind Matt. It didn’t really worry him though as he knew he was still on for a good time so that was what mattered most.

As it turned out, he could have carried on on the road way as the path joined up with the road anyway in the end but it didn’t matter. Rich knew he had to just remain focused on the task ahead.

Quite soon, he caught Matt up and they ran together for a bit. Matt apologized to Rich as he hadn’t realized the paths would join up. Then they came to an uphill section and that was when Matt began to move away and it was clear he was the stronger of the two. 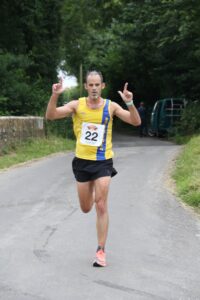 Rich poses for the camera as he heads down the road

Remembering the route from his previous attempt, Rich knew the last three miles contained some tough hills so his plan was to go as quick as he could for the first 10 miles and then just grind it out over the hills in the latter stages.

There were a few undulations in the 10th mile but nothing too drastic. Then on the 11th mile the hills began to kick in. From there the pace dropped and it was just a case of battling your way up as best you can.

The 12th mile was pretty much all uphill so it was a real test of resolve but Rich stayed strong, knowing he’d be on for decent time if he could keep it together.

With one mile left, he began to feel pretty good, knowing that the end was near and it was now just final push. He soon ascending the final hill leading up to the school before making his way through the gate and into the field.

That left just a final lap around the field before reaching the finish. He did his best to muster up a fast finish but his energy levels were pretty low at that point.

Stopping his watch as he got to the line, he felt like he’d done enough to secure a new PB. He was shocked to look when he looked down at his watch to see the time of 1:18:49. He’d never dreamed he’d be able to run a half marathon anything like as quick as that.

He was elated with the result and very pleased to see that all the hard work he’d been putting in in training was beginning to pay off. He’d beaten his previous best by over four minutes and he almost couldn’t believe what he’d accomplished. 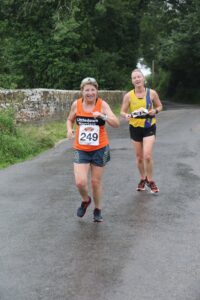 Meanwhile Estelle had set off in one of the later waves and was busy negotiating her way round the challenging course. For the first nine miles of it she was going pretty well. Then when she started hitting the hills on the 10th mile the wheels came off a bit. 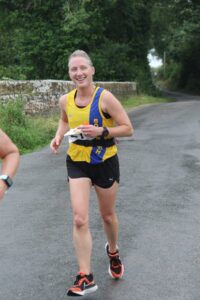 On occasions she was even reduced to walking pace when making her way up the long hill on mile 12. But she showed tremendous grit to get to top before pulling it together well in the final mile. 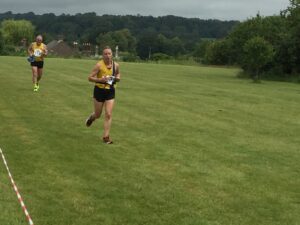 Crossing the line in a time of 1:59:14, Estelle was 28th placed female and 121st overall. Considering the lack of endurance training she had done over recent times, to get in in under two hours was a fairly good achievement, given the tough ending she was faced with. 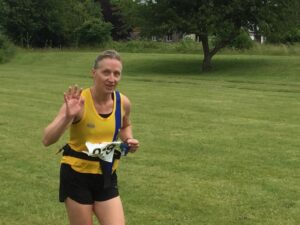 In the end it was a close call between Matt Papa, Ben Renshaw and Ben Foyle for the race win but Ben Foyle edged it, getting to the line in a fantastic time of 1:13:29.

4th place went to Christopher Peck in the end, as he went over the line in a time of 1:15:30. Incredibly, he was almost caught in the end by Matt Brown who had a storming last four miles despite the hills.

He was still managed a 5:45 sort of pace which was extraordinary given the trajectory he was on which certainly bodes well for his marathon prospects going forward. 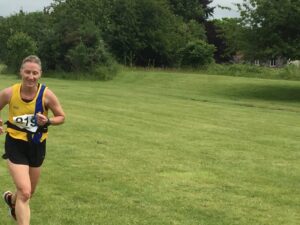 Georgina Povall was 1st female over the line in a time of 1:30:54, which put her 27th overall. That gave her a huge margin of victory over the 2nd placed woman who was Charlotte Halford of Purbeck Runners. She made it round in 1:37:25 which put her 48th overall.

Karen Perrett of Weymouth St Paul Harriers was 3rd female over the line, finishing in 1:38:49. That saw her take 54th position overall. 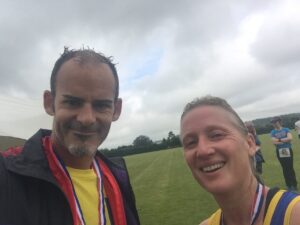 The race had certainly served as a huge confidence booster for Rich as he embarks on another heavy block of training ahead of the London Marathon in October.

He now knows he’s in a pretty good place at the moment with his fitness, as well as his speed and endurance. It’s now just going to be a case of continuing to work hard over the next few months to see if he can make any further gains and to steadily build up the mileage. 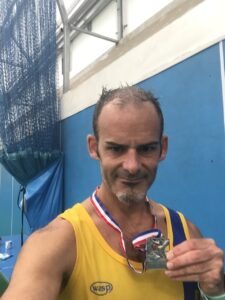 As for Estelle, she knows she has some work to do to get back to her best form but with club training back in full swing and races now well and truly back on the calendar, she’ll certainly have the scope to do that over the coming months. 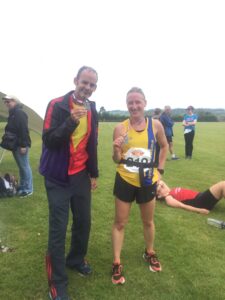