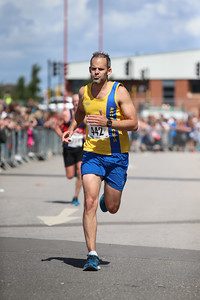 Richard Brawn powers along on his huge sub 1:30 attempt at the Ramathon Derby Half Marathon

Whilst many Bournemouth AC members stayed local for the Poole Festival of Running, Richard Brawn casted his net further afield as he made the long journey up to Derby for the Ramathon Derby Half Marathon.

This was the race that Richard had been targeting for his first sub 1:30 half marathon and he had undertaken a rigorous 10 week training programme in the lead up to the race.

After seeing quite a big improvement in his running since starting the training programme, Richard was in confident mood going into the race. He’d set a couple of parkrun PB’s in the lead up to the big day and had also set a new half marathon PB of 1:30:01 at Southampton half way through his training programme.

Although he was intending on treating the Southampton race as more of a training run, it went so well that it very nearly resulted in the sub 1:30 run well ahead of schedule. This was a huge boost for Richard and proved that the six day, 40 mile-a-week training routine he’d been doing had put him on the right track.

The race route started and finished just outside Pride Park stadium, the home of Derby County Football Club. It was a great place to stage a large race of this kind and the course was fairly flat for the duration, so a good one for setting a quick time. 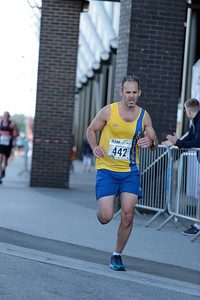 Despite being determined not to set off too quickly from the start, Richard was feeling comfortable running at around 6:30 pace for the first five miles. He then followed that up with a couple of 6:40 miles.

It was on the 8th mile that Richard started to feel his energy being slowly sapped away, although he did still manage to complete that mile in 6:49, so still under the target of 6:50 that he’d set himself for each mile.

The course then turned off the road and changed to a track through a woodland area and through a few parks. This was where Richard really began to struggle to maintain the pace.

The conditions were very hot but luckily there was a bit of a breeze which prevented the runners from suffering as much. For a few miles the route took the runners over a gravelly sort of surface.

On the 11th mile, the heat and the surface and his apparent lack of energy had really got the better of Richard and he turned in his slowest mile of the race, at 7:28. By this time Richard had mentally given up on finishing within the 1:30 target time. Then, half way through the 12th mile, he switched his watch onto time to see how he was doing and was surprised to see that it said 1 hour 19 minutes. This meant if he got a move on, he’d still be able to reach the finish line within the time he was hoping for.

With that psychological boost, Richard manage to get back to his normal pace for the last mile and a half and once Pride Park stadium came into view he knew he had done it. He still kept pushing to the line as he wanted to get the quickest time he could and his energy levels had been reinvigorated by the crowd as he worked his way round the stadium to the finish line. 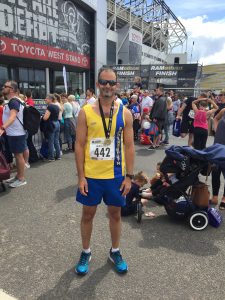 Richard’s official time was 1:29:06 which put him in 122nd place overall out of field of 2,780. Although he was elated about having finally breached that illusive 1:30 barrier, he was a touch disappointed that his pace dropped so significantly for a period in the race. That said, it’s certainly something to build on and has given him the belief that he can go faster with a better race management strategy.

Ultimately, Richard was glad that the 10 week’s of hard training paid off and he was able to achieve the target he wanted to and he’s looking forward to his next challenge, whatever that may be. 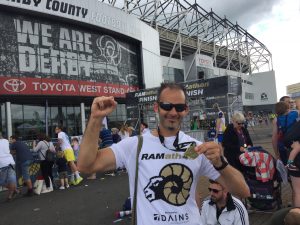 A happy Richard celebrates achieving his goal in emphatic style