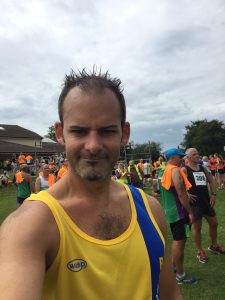 For a good few weeks, Richard Brawn had been searching for a 10k race in the local area. It was a distance he hadn’t done in an official race since the Weymouth Bay 10k back in March so he was desperately keen to seek one out in order to measure his progress. That search eventually led him to the D’urberville Dash, which is takes place in Wool.

The D’urberville Dash is a multi-terrain course, incorporating a testing mix of forest tracks, fields and country roads. It is mildly undulating but predominantly flat, with one large section of downhill road where you can really stretch the legs.

One of Richard’s main goals at the moment is to run a sub 40 minute 10k which is something he’s still yet to achieve. He knew that wouldn’t be feasible on a tricky off-road course though so was just hoping to get as closed to 40 minutes as he could.

As it turned out, the race did actually sell out, due to an influx on entries on the day, bringing the number of registered entries up to the 400 mark. This seemed to take the race organisers by surprise, as they hadn’t been expecting the late surge of interest. In fact, they didn’t even have enough t-shirts to supply one the whole field.

That aside though, the organisation of the race was excellent and the route was very well marshalled and marked out throughout. Despite a lot of rain in the two days leading up to the race, the route had been thoroughly checked and given the go ahead.

It quickly became apparent to Richard that it was going to be more like a cross-country run than a fast road course. After the road section that ran for the first three quarters of a mile, the route then turned through a field and then into the woods. 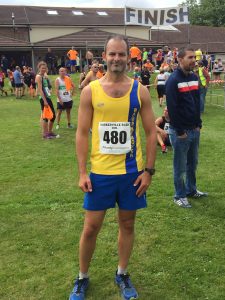 Richard negotiated the tricky, multi-terrain route to finish in 22nd place with a steller time of 41:35

The path through the forest was very narrow, with very little room to overtake. It was important to find the right moment if you did need to pass anyone, which Richard successfully did on the first woodland section.

It was on another forest track leading up to the end of third mile that Richard again found himself behind someone. With the track being so narrow, it would have been difficult for Richard to pass the guy in front who was slowing down quite considerably.

This stretch of running below the threshold gave Richard some much needed respite and once they came out of the wood and back onto the road, he was able to then power on, having recuperated some energy.

At the half way mark there was a drinks station and Richard had already decided not take on board any water and to use this as an opportunity to keep his race rhythm going and push on. That was exactly what happened and Richard was able to accelerate away and build up a decent gap between himself and his nearest rival.

Unfortunately, the group ahead had already extended their gap too far whilst Richard had been held up in the forest for him to catch them. He spent the rest of the race on his own, although he did almost catch one other competitor towards the end.

After the long downhill stretch of road on the fourth mile it was then back into the woods and along the same paths that the runners had trodden on the way out. Although it was well marshalled, Richard was still a little edgy about going the wrong way since there was no one else in sight.

Luckily he successfully managed to navigate his way to the end of the forest and through the field before hitting the road again for the last half a mile.

Richard gave everything he had in the final dash toward the finish and was ultimately pleased with his time of 41 minutes 35 seconds. This put him in 22nd place overall and 5th in the M35 category.

He was also particularly chuffed with the bright orange t-shirt he received at the end of the race, as well as the great selection of homemade cakes they had on offer. 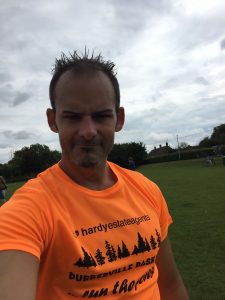 The bright orange t-shirt was well worth the 6.2 mile effort in Richard’s eyes