Richard Brawn sizzles in the sunshine at the Salisbury 10 miler 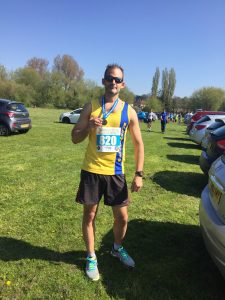 On the hottest day of the year so far, Richard Brawn lined up with over 700 others to take on the Salisbury 10-mile race. It was a Hampshire Road Race League fixture so attracted many of the county’s finest, battling it out for those all important points.

The course was quite undulating, with not too many massive hills but frequent ups and downs throughout which presented a real challenge, particularly in the intense heat. The route was quite scenic, starting at Five Rivers Leisure Centre, running through some nice country roads before finishing with a lap around the track. 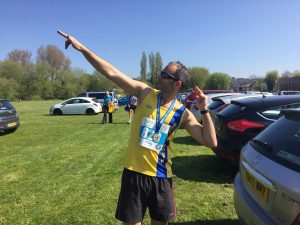 Richard crossed the line in 116th place with a time of 1 hour 9 minutes 12 seconds. This was 14 seconds quicker than his time in the Bournemouth 10 six weeks ago. Of course, that day, the main difficulty was presented by the wind as opposed to the blazing sunshine and infinite inclines of Salisbury.

Richard comes from a family of running enthusiasts and his brother Dave was also in the race. Dave competes for Portsmouth Joggers who are part of the Hampshire Road Race League. The brothers are pretty evenly matched, with Dave coming in just under a minute later in a time of 1.10.10.

Richard was 65th in the Senior Male category on the day and was using the race as a conditioning exercise before the Southampton Half Marathon in two weeks’ time.