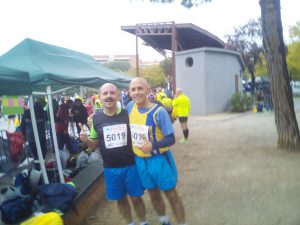 With the road/cross country section enjoying a Christmas meal at which there were a number of awards, Stuart Nicholas and Antonio Ruiz running well for BAC in Portsmouth and Madrid respectively, and Peter Thompson‘s amazing challenge shortly to commence, BAC is as active as ever! 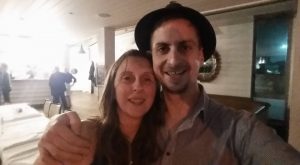 Steve Parsons and his wife, Ros, entering into the party spirit

On Friday 16 December over 40 of BAC‘s road and cross country runners assembled at the Kitchen Club, adjacent to Iford Golf Course, for an enjoyable Christmas meal followed by a disco, efficiently organised by Rich Nelson and Ian White.  It has been a very successful year for this section of the club, both on the road and cross country, and, in order to mark this, Rich, our Club Captain, arranged for a number of trophies to be awarded, a gesture which was appreciated, not just by the recipients, but by everyone present.  In addition, throughout the year, County Championship medals, gold, silver and bronze, have been won by BAC athletes, and as these medals have not been available at the Championship races (a situation it is hoped will change for 2017), the opportunity was taken to award these to the winners who were present.  This was a very enjoyable and successful evening, and many thanks to Rich and Ian for their hard work in the organisation.  It was also a chance to say goodbye to Gonzalo Mogorron, who has been in Bournemouth from Spain at language school for the past six months, and has really become involved in club affairs, attending training and competing regularly.  We wish Gonzalo good luck in the Seville Marathon in February, and in his new job which he starts in Madrid in January.  So, who were the evening’s trophy winners?  The first trophies were for the ‘Runners’ Runner’ – the winners having been voted for by their fellow club members, and these went to, male, Sanjai Sharma, and, female, Yvonne Tibble.  Then came the Captain’s Awards, decided on by Rich himself.  These went to, male, Tom Paskins and Alex Gould, and, female, Nikki Sandell and Emma Dews.  The Best Newcomer Award winner was Marcus O’Toole, and the Most Improved Runners were, male, Pawel Surowiec and, female, Sam Laws.  A special award went to Emma Dews as the Star BAC Team Baker for her delicious cakes at cross country fixtures, and at the ‘get-together’ after the Boscombe 10k!  Although not all the County Championship medal winners were present to receive their medals, here is a complete list of BAC‘s medal winners:  10 miles (Lytchett 10) Steve Way (Gold and Masters’ Gold), Gemma Bragg (Gold):  Marathon (North Dorset Village Marathon) Jon Sharkey (Gold), Simon Way (Silver and Masters’ Gold), Anthony Clark (Bronze):  10k (Purbeck 10k) Jon Sharkey (Gold), Peter Thompson (Bronze), Emma Dews (Silver and Masters’ Gold), Nikki Sandell (Masters’ Bronze):  Half Marathon (Stur Half) Josh Cole (Gold), Sanjai Sharma (Silver and Masters’ Gold).  Many congratulations to all BAC‘s award and medal winners.  Of course, there were a number of other BAC road/cross country award winners at the club’s Presentation Evening in November, as those who were there will know, and BAC teams and athletes are in line for some Dorset Road Race League trophies for 2016, as those of us who run in the Broadstone Quarter on New Year’s Day and attend the presentations which follow will find out!

Congratulations, also, to Stuart Nicholas, who was a remarkable 7th of a total of 1014 competitors in the Portsmouth Coastal Marathon on Sunday 18 December.  Stuart‘s time of 2.53.09 was highly creditable on a course which, although flat, takes in various surfaces, including gravel, sand and, every so often, a bit of tarmac!

Well done too to Antonio Ruiz, who was flying the BAC flag in Madrid on the same day.  Antonio, like Gonzalo, was a language student from Spain here in Bournemouth, although for a considerably longer period, during which Antonio trained with and competed for the club, and also helped with the training at the Wednesday Junior Development evenings.  Antonio is returning from long term injury, so his run in a 10k race in Madrid at the weekend (wearing his BAC vest!) in 38 mins 20 secs (Antonio was 200th of a total of 2500) was very encouraging.

Peter Thompson starts a remarkable challenge shortly in St Petersburg, Russia, the aim being to run 44 marathons in 44 countries in 44 days in order to raise awareness of mental health issues.  Peter is raising money for two charities, Mind (www.mind.org.uk) and a local charity, Livability Holton Lee (www.holtonlee.org), and amongst the marathons Peter will be running are the London Marathon, followed by Lisbon, in Portugal, which will be the 24th, just over half way.  We wish Peter every success in this unique endeavour, which will hopefully raise a large sum for two excellent charities. 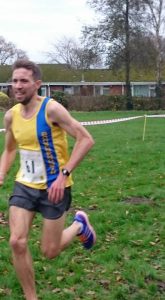 Peter Thompson will be taking on a greater challenge than the Christmas 10k 2015!