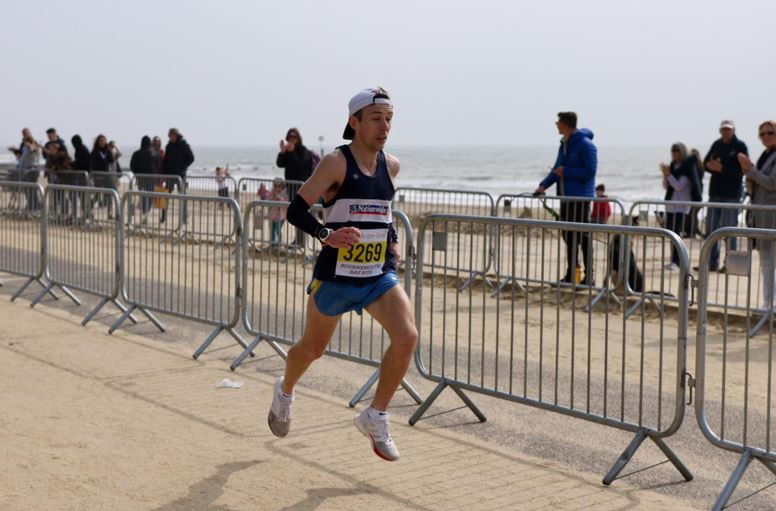 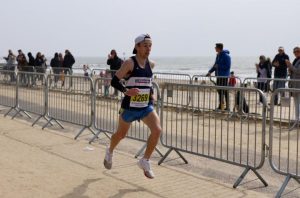 After the Bournemouth 10 went down a storm earlier in the year, the annual Spring dose of coastal racing action came in the form of the Health-on-Line Bournemouth Bay Run, featuring a half marathon and a 10k as well as a 5k and a 1k for the kids.

With the event taking place three weeks before the London Marathon, it’s an ideal one to use as a training run in  preparation for that, which is exactly what Rob McTaggart and Samantha Laws were looking to do.

Tag was intending the run five miles before the half marathon, and an additional five afterwards, brining his total for the session up to 23 miles.

Sam was going for 7 miles before starting the half marathon, giving her a total of 20 miles for the session.

Of course, they knew that would more than likely compromise the quality of their races a touch but with the main focus being on London, that is par for the course in races that take place in the weeks and months leading up to it.

Also taking part in the half marathon race, Gemma Bragg has been on fire since returning to running recently after a long injury lay off. She’s already recorded a first lady finish at the Lytchett 10 as well as coming in as 4th female at the Bournemouth 10 and 6th woman at the Wimborne 20. She was hoping the Bournemouth Bay Run Half Marathon would be another one to add to her list of successes. 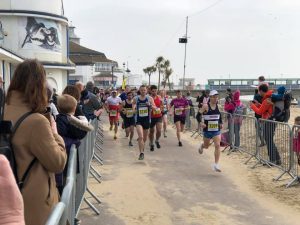 A stiff headwind made for a tough first six miles or so along the promenade. That brought about a fairly moderate start for Tag as he found himself isolated in what he thought at the time was 2nd position.

Since he wasn’t aiming to run too hard, Tag was prepared to settle for that but as the race went on he did manage to pick up the pace a bit, putting in a very good shift for the last five miles. 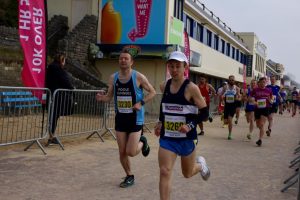 Crossing the line in a time of 1:15:27, Tag ended the race about 30 seconds behind the guy in front. However, it transpired that he didn’t actually have a number and hadn’t even entered the race. That meant Tag was awarded the official race win.

He then followed that up with his five mile warm down afterwards to round off a pretty decent training run for the day with fairly minimal effort expended. 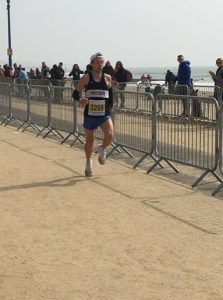 Although he thought he was 2nd, it turned out Tag was the winner of the Bournemouth Bay Run Half Marathon, crossing the line in 1:15:27

Meanwhile, Gemma Bragg was having an excellent run of her own. She’d managed to find a group of chaps to run with on the way out to avoid getting knocked out by the nagging headwind.

Maintaining her pace well over the second half of the race, Gemma finished as first lady and recorded her first ever sub-1:30, crossing the line a superb time of 1:28:32. 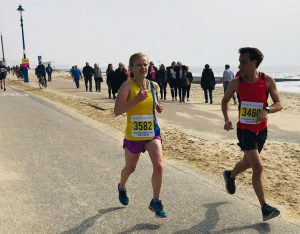 Gemma Bragg soars down the promenade on her way to a first ever sub-1:30 finish

That was an improvement of just over two minutes on her previous best and put her in 24th place overall in a field of 950 people. It was a terrific result for Gemma and, needless to say, she was extremely pleased with the run. 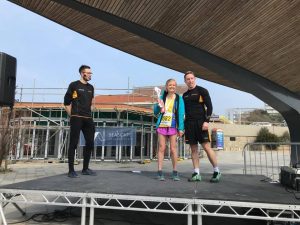 Embarking on her half marathon race off the back of the 7 miles she’d already run, Sam was keen to see how much her fitness had improved since her marathon started.

Whilst it wasn’t quite a quick as the time she posted in the Bournemouth Bay Run Half Marathon last year, the fact that she’d ran 7 miles beforehand and was only two minutes down on her personal best time represented encouraging signs for Sam.

What was even more encouraging though was the time she completed the overall 20 mile run, which was 3 hours 5 minutes and 28 seconds. That was the fastest she’d ever run over that distance and was exactly 11 minutes quicker than the time she ran the Wimborne 20 in at the beginning of March.

That underlines what a huge improvement she has seen since starting her marathon training and the fruits of her labour are beginning to bloom.

Sam has worked so hard to get into the best possible shape for London and has been putting in some extremely high mileage over the course of the weeks and months. She’s also been attending the hard marathon training sessions on Tuesday night’s and completing other interval sessions of her own.

Targeting a sub-4-hour finish at London, the form she is currently showing will certainly give her the belief that she can go on a conquer that target and perhaps even be significantly quicker.

Tag’s margin of victory turned out to be a minute-and-a-half, with Philip Jones taking 2nd place in a time of 1:16:56. 3rd place went to James Dean in a time of 1:18:08. He’s thought to be no relation to the American actor though who starred in ‘Rebel Without a Cause’.

The next female in after Gemma was Laura Pettitt who crossed the line in 81st place overall in a time of 1:35:44. That meant Gemma had a lead of over 7 minutes on her nearest rival. Becky Hollowbread rolled in for 3rd place in a time of 1:36:32, putting her 87th overall.

Next in line for Tag was a double-race weekender, consisting of a 5000m on the track in the first Southern Athletics League fixture of the season at Eton, followed by the Salisbury 10 the day after. 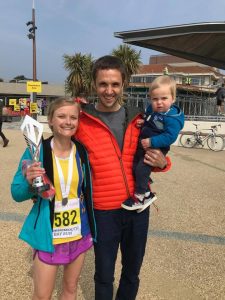 Gemma celebrates a terrific performance with Jez and Milo