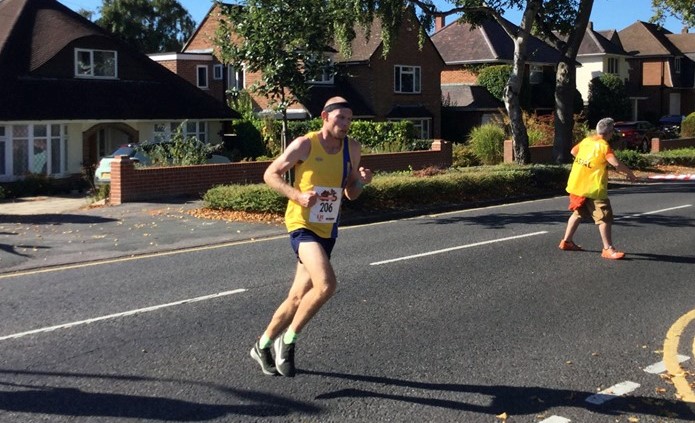 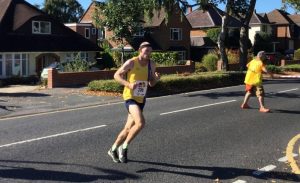 Rob Spencer has been in fine form of late and was, without a doubt, the man to beat when he lined up for the Hoburne 5

Just two weeks on from his commanding victory at the Littledown 5, Rob Spencer was back in 5-mile race action at the Hoburne 5 and hoping he might be able to make it a Dorset double for the distance.

It wasn’t going to be walk in the holiday park though for Rob as he faced stiff competition from the likes of Dom Willmore of Poole Runners, Barry Miller of Poole AC and Robin Copestick of New Forest Runners.

After recording a terrific new 5-mile PB of 28:06 at the Littledown 5 two weeks prior, Stu Nicholas knew he was also in shape to mount a challenge for the top placings.

The Hoburne 5 starts and finishes at Hoburne Holiday Park which is an excellent location for a race HQ. The course is predominantly flat, with a few mild inclines. It’s generally quite a fast course but features a fair few twists and turns which can disrupt the rhythm a touch.

It was quite windy on the day as well may have hampered the chances of a PB for the distance somewhat. Nothing much can slow Rob Spencer down though. He immediately hit the front and clocked the first mile at 5:30 pace. From then onwards, he got progressively faster.

There are some inclines on the second mile but Rob powered up them with no concerns, maintaining his pace well. He went through the next two miles at 5:28 pace before moving into a higher gear for the fourth mile and completing that in 5:19.

He wasn’t done yet though and managed to up the pace further in the fifth mile to a staggering 5:11. That gave him an excellent finishing time of 27:05 which was enough to see him through for the win. 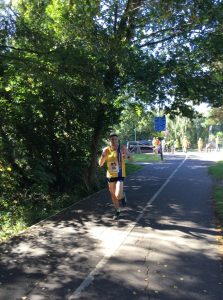 It wasn’t quite as quick as his time of 26:39 at Littledown but was still another magnificent performance from Rob to add to his growing list of successes.

His margin of victory wasn’t as big as it was at Littledown either though as Dom Willmore did well to hang with him and crossed the line just 10 seconds later in a time of 27:15.

Another impressive display from Stu Nicholas saw him take third place in a time of 28:46. Again, it wasn’t quite as quick as his time at Littledown but considering the conditions, and the fact that there wasn’t quite as much competition for him at the sharp end of the field, it was a very good result for Stu.

Fourth place went to an unaffiliated runner in the shape of Stephen Nurrish who finished in a time of 29:40. He was the last man to get under 30 minutes.

Barry Miller of Poole AC took 5th place in a time of 30:34, with Robin Copestick finishing 6th in 30:41. Robin used to be a Bournemouth AC member several years ago and has made a return to running after a very lengthy injury lay-off. He’s even attended a couple of BAC training sessions recently and it’s been great to see him round the place again. 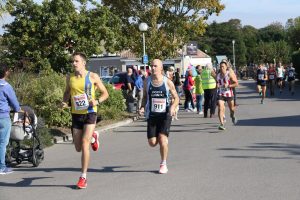 The first female over the line was Gemma Russard of Lymington Triathlon Club. She finished in 15th place overall with a time of 32:50. She had a very healthy lead over the next two women to come in who were Kristina Varley of Littledown Harriers and Heather Butcher of New Forest Runners.

Joining Rob and Stu in the Hoburne 5 and also representing Bournemouth AC was Jud Kirk. Jud is something of a mainstay in the race having competed in it in each of the last six years dating back to 2014.

He completed the course in a time of 34:10 this time round, which put him in 19th place overall. That was a pretty decent run for Jud and was less than a minute off the time of 33:24 which he posted last year. 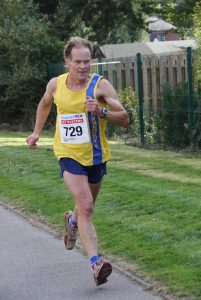 Stu’s partner Anna Trehane also ran at the Hoburne 5 and she got over the line in a time of 39:46 which put her in 40th place overall. That was almost exactly a minute off her best 5-mile time.

The race is organised by Christchurch Runners and the run director Peter Wallis did an excellent job trying the drum up participation for the event. Since this year it wasn’t part of the Dorset Road Race League schedule they were significantly down on numbers in the months leading up the race.

In the end though, a total of 110 runners successfully completed the course so it wasn’t as bad a turn out as first feared. The timing of the race is quite good though since it’s the weekend before the Bournemouth Marathon Festival so it could be seen as an ideal warm up run ahead of the BMF.

The Hoburne 5 is a fantastic little local race though and it’s nice to see these events that have carried with them a good tradition over the years, still going strong. Hopefully more will sign up next year to get the numbers a little closer to what they should be for such a friendly and well organised race. 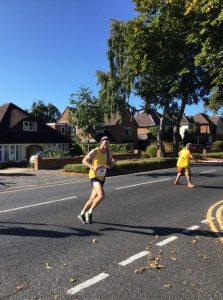