Rob Spencer wraps up the win at the Christmas 10k 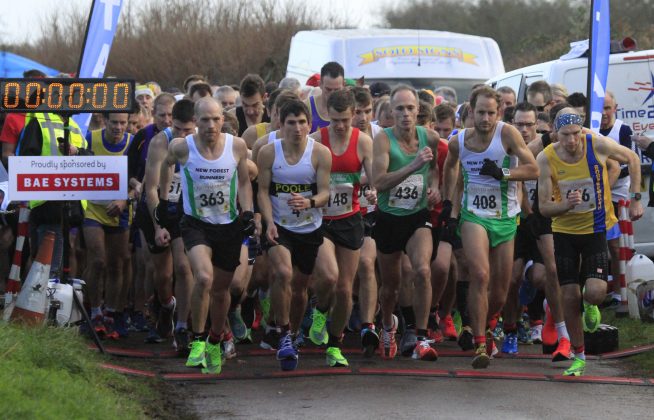 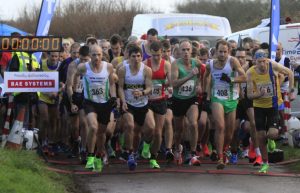 The Christchurch Christmas 10k, or Christmas Pudding race as it’s otherwise known, has been a popular fixture in the Dorset race calendar for quite some years now. It’s one that Bournemouth AC athletes have a history of producing great results in and those competing in this year’s event were hoping that trend might continue.

After winning the race last year, reprsenting St Albans Striders at the time, Rob Spencer was back again to try to retain his crown. As is the case with pretty every local race, in order to ermerge victorious, the top BAC members know they will have to finish ahead of Lee Dempster of Lytchett Manor Striders and that is no easy task.

Lee has had a cracking season and is always in contention at the front of the field. Another man who’s running has sky rocketed in 2019 is Chris Alborough of Poole AC. He was also in the mix and hoping to challenge for top honours.

Philip Mosley of New Forest Runners, Andy Leggott of Lonely Goat and Robert Doubleday of Poole AC were also in the line up and with all that talent jostling for position, it promised to be an epic showdown.

There were also a fair few other big names in the fabled yellow and blue vests who were looking to make their mark, including Stuart Nicholas, Graeme Miller, Sanjai Sharma and Adrian Townsend.

The carrot of a Christmas pudding at the end of the race and a cup of hot soup is usually enough to draw the numbers for the Christmas 10k and the race has a nice festive feel to it, with many competitors dressing up in Santa outfits, or as elvesm, reindeers or even Christmas puddings.

Rob wasn’t too concerned with all the festive frivolities though. He was as focused, driven and determined as ever and was soon taking the race by the scruff of the neck. It was only really Lee and Chris who felt like they could go with him.

As the race progressed though it soon became apparent that Rob was going to be far too strong for anyone else. He was tearing round the course at a scintilating speed and soon built up a huge lead. It was all academic from that point on. 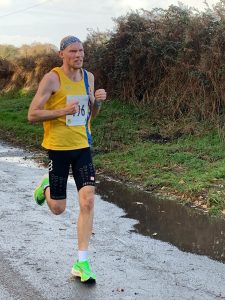 Arriving at the finish line in an astonishly quick time of 32:05, Rob had blazed a brilliant new PB, beating his time from the Purbeck 10k, when he made his BAC debut, by 1 minute 14 seconds. His winning margin had already stretched to well over a minute by the time Chris arrived to take 2nd place.

In fact, it was a gap of exactly 1 minute and 20 seconds before Chris crossed the line, recording a time of 33:27. Lee followed in four seconds later to take 3rd place in a time of 33:31. Philip Mosley wasn’t too far behind, sealing a 4th place finish in a time of 33:52. 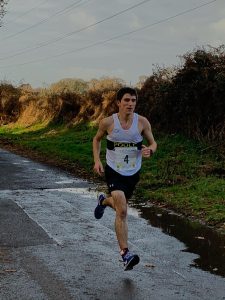 Next up, it was Tom Stevens of Southampton who crossed the line in 5th place with a time of 34:16. He was followed by Andy Leggott who recorded a still excellent time of 34:32. 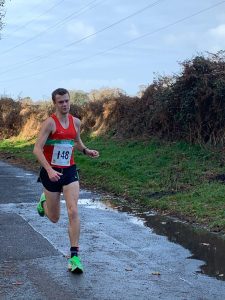 Coming in in a time of 35:19, Stu Nicholas had a very good run to take 9th place overall. It was only really his epic run in the very same race last year where he had produced a significantly quicker time over a 10k distance. 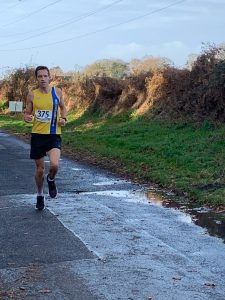 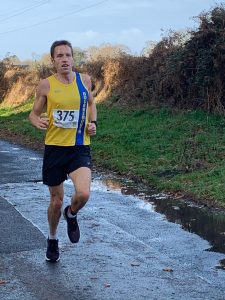 Andrew is often seen around the Kings Park area and has had his competitive running capacity blighted by injuries over recent years so it was good to see him coming back into some good form.

Another man who has experienced his fair share of injury turmoil over recent years is Graeme Miller. An ongoing glute issue has persistently played havoc with his training but he’s never given up. He’s always found a way to work through it and put in a performance when it really matters.

It finally feels like things are moving in the right direction now for Graeme though and he’s beginning to get in some pain-free runs. The strength and conditioning work he’s been doing is beginning to pay dividends and he’s looking in good shape. 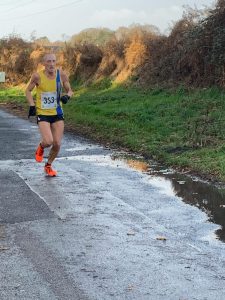 After some difficult injury woes, Graeme Miller was back in form again and firing on all cylinders

He found a good group to run with in the early stages of the race and the miles seemed to soon tick by. The last couple of were is there was a strong headwind but Graeme kept it together well to finish as 1st V45 in a time of 36:24.

That put Graeme in 14th place overall and it had turned out to be his fastest 10k for four years so that was a very pleasing result. He came in just ahead of Alastair Pickburn of New Forest Runners who was 15th in 36:34. 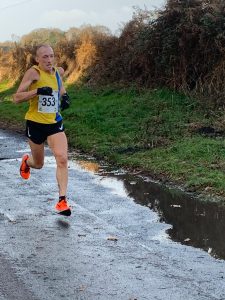 Another recognisable name from a Bournemouth AC perspective was Robin Copestick who used to run for a club back in 2015. Since then he’s had a very lengthy injury layoff and is now starting to get back on track with his running and producing some good times.

He’s even made a few appearances at BAC training sessions recently although he is currently unattached. Finishing in 23rd place, Robin crossed the line in a time of 37:36 which was a decent run from him.

Hoping for a sub-40 time, which is something he’s normally been used to in the past, Adrian Townsend is another BAC member who’s had a turbulent time with injuries.

Recently he’s been suffering with plantar fasciitis which has adversely effected his training and consequently his fitness. That culminated in a slightly disappointing time at the Boscombe 10k at the end of November.

This time he was going a little better though and at the six mile point he thought he’d got the sub-40 in the bag. Unfortunately though, as he approached the finish he was disappointed to see the clock just ticking over 40.

Finishing with a time of 40:23, Adrian crossed the line in 35th position overall and was 2nd in the V55 category.

Arriving at the finish shortly after Adrian was his Bournemouth AC teammate Sanjai Sharma who is again, another member who has been plagued by injuries of late.

Clocking a time of 40:47, Sanjai came in in 38th place and was 3rd in the V55 category. It was his worst 10k time for a number of years but it wasn’t a huge surprise to Sanjai considering his injury woes.

He’s been trying to build up his running again slowly but his glutes are still painful which is making it difficult. He’ll be hoping though, after a little break over Christmas he’ll come back swinging again in the New Year before he starts his marathon training.

Completing the course in a time of 43:10, Jud Kirk ended the race in 59th position and 3rd in the V60 category. That wasn’t quite as quick as his time at the Boscombe 10k a couple weeks prior but it wasn’t a bad effort from Jud given the blustery conditions.

Also in action for the yellow and blues at the Christmas 10k was the White clan, consisting of Ian White and his now wife Sam, formerly Sam Laws. And Ian’s daughter Katrina was competing as well, making for a nice festive, family affair.

Ian has been suffering a knee complaint over recent times so has had to tread very carefully with his running. Having only managed 50 miles of slow training over the past six weeks, Ian was expecting to struggle to go sub-50.

For the first mile, he was chasing Katrina which got him going at a reasonable pace. He then found, to his surprise that he was actually able to keep going at that speed. It was only over the last couple of miles into the wind that he lost around 15 seconds.

All-in-all, it was a very pleasing run from Ian’s perspective and he crossed the line in a time of 46:28, putting him in 96th place overall and 16th in the V45 category.

It’s been a tough year for Katrina and she’s struggled to find her top form so she was really pleased to end on a high with her fastest10k time of the year.

Clocking a time of 48:50, Katrina crossed the line in 129th place overall and 24th placed female. It was only really on the fifth mile into the headwind where she found herself isolated and lost a bit of pace. Other than that though, she was very happy with her performance and rightfully so.

Completing a good day all round for White possie, Sam weighed in with a cracking course PB of 55:34. That was her second fastest 10k ever as well so a very encouraging run for Sam.

She finished as 77th lady and 9th in the V50 category and was 230th overall. 466 runners in total successfully negotiated the course on the day.

For many of them it will be their last race of the year before the Christmas partying gets underway and season of merriment begins. No doubt for some there will still be time to don the Santa hat for one or two festive parkruns over the course of the holidays though.

There’s also the Round the Lakes 10k on Boxing Day so there will still be ample opportunity to burn of those Christmas calories, should the need arise. 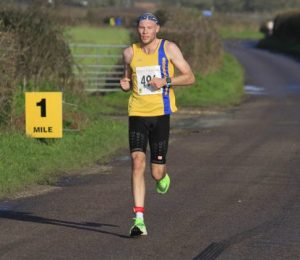