Rotary Quarter Half Marathon and Parkruns 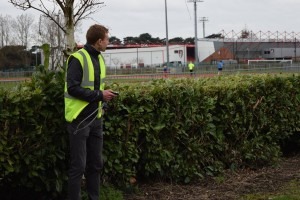 There is always plenty going on over the Easter holiday, only one of which is the Rotary Quarter Marathon, held this year as usual on Easter Saturday, 4 April, with the result that there was a weakened BAC presence in this, the fourth fixture of the Dorset Road Race League for 2015. Well done to the Ladies, though, who fielded a complete team, led by Nikki Sandell (42.33 and 3rd FV35), 46th overall, and to Paul Dixon-Box (38.40) and Robin Copestick (39.20), 8th and 13th respectively of a total of 376 finishers.  The Ladies’ team was completed by Caroline Rowley, 135th in 48.21, and Louise Price, 170th in 50.37, with Steve Cox running well to finish 81st in 45.42.  With only three BAC men competing, the Mens’ Team were the 7th League team, and the Ladies 4th.  The next League fixture is the North Dorset Village Marathon on 3 May, in which, traditionally, BAC hasn’t always been as strong in depth as some of the other League clubs, but there is still plenty of time to recover after that!

Meanwhile, at the Bournemouth Parkrun, Jud Kirk, Ian White, Joe Price, Will Price and Sam Laws were amongst the 360 finishers, and there is no error, Paul Hill didn’t finish 2nd, in fact, Paul was timekeeping, finding it “harder than it looks”!  At Poole, George Way continued his regular appearance, finishing 25th of an astonishing total of 747.