Round The Lakes, Parkruns and Clevedon 4 Miles 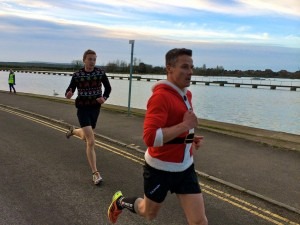 Boxing Day turned out to be a cold, frosty morning but with virtually no wind, conditions were near perfect for the annual 10k race around the lakes in Poole Park, organised by Poole AC.

There were 330 finishers this year with no less than 17 of these from BAC.  Clearly, there had not been too much indulgence of food and drink on Christmas Day as some 9 of the BAC athletes achieved PBs which augurs well for the coming year.  There was also a string of category podium places from the team.

First BAC lady home was Gemma Bragg finishing in a time of 39.16 (PB) and she was 3rd lady overall (1st Senior).

There must be special mention of Mark‘s performance as this was the 41st consecutive year that he has competed at the Boxing Day races.  For many years, Mark was a very talented runner for BAC until he was diagnosed with a serious illness which prevented him from competing at the level he previously achieved.  He has continued to make this race his annual ‘challenge’ and all of us who have known him for so many years commend him.  We are rightly proud of him. 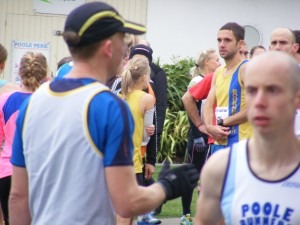 Jez and Gemma Bragg amongst competitors trying to keep warm at the Round the Lakes 10k, Boxing Day 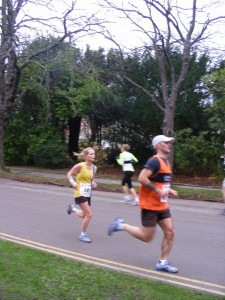 Gemma Bragg on her way to a PB in the Round the Lakes 10k, Boxing Day

Meanwhile, Toby Chapman was competing in a 4 mile Boxing Day race in his home town, organised by Clevedon AC.  This is a very popular annual race, attracting 1,000 or so entries, and, of the 879 who finished this year, Toby was 9th in 20.47.

An amazing total of 419 finished the Poole Parkrun in Poole Park on Christmas Day, and the first of these was our very own Paul Hill, running in this event for the first time.  Also competing were Sanjai Sharman, finishing 10th, and Ross Smith.  Ross‘ 170th position in 25.06 belies his true ability, considering his PB at Poole is 17.30 and his recent superb Duathlon performances.  Ross was clearly saving himself for the next day when, as noted above, he achieved a 10k PB. The Parkruns (as with most races) could not take place without the volunteers who turn out week after week, and particular thanks are due to the large number who turned out on Christmas Day to enable the Poole Parkrun to go ahead.  Having also achieved a 10k PB (and his ambition to go under 40 minutes) on Boxing Day, Paul went on to win (yes, win, not 2nd place this time!) the Bournemouth Parkrun on 27 December, in which, of a total of 201, Paul was joined by Jud Kirk, Steve Cox, Helen Ambrosen, and one of our youngsters, Amelie Scott.  At the same time, of the 415 running in Poole Park, Graeme Miller was 8th, and George Way 25th in the Poole Parkrun.