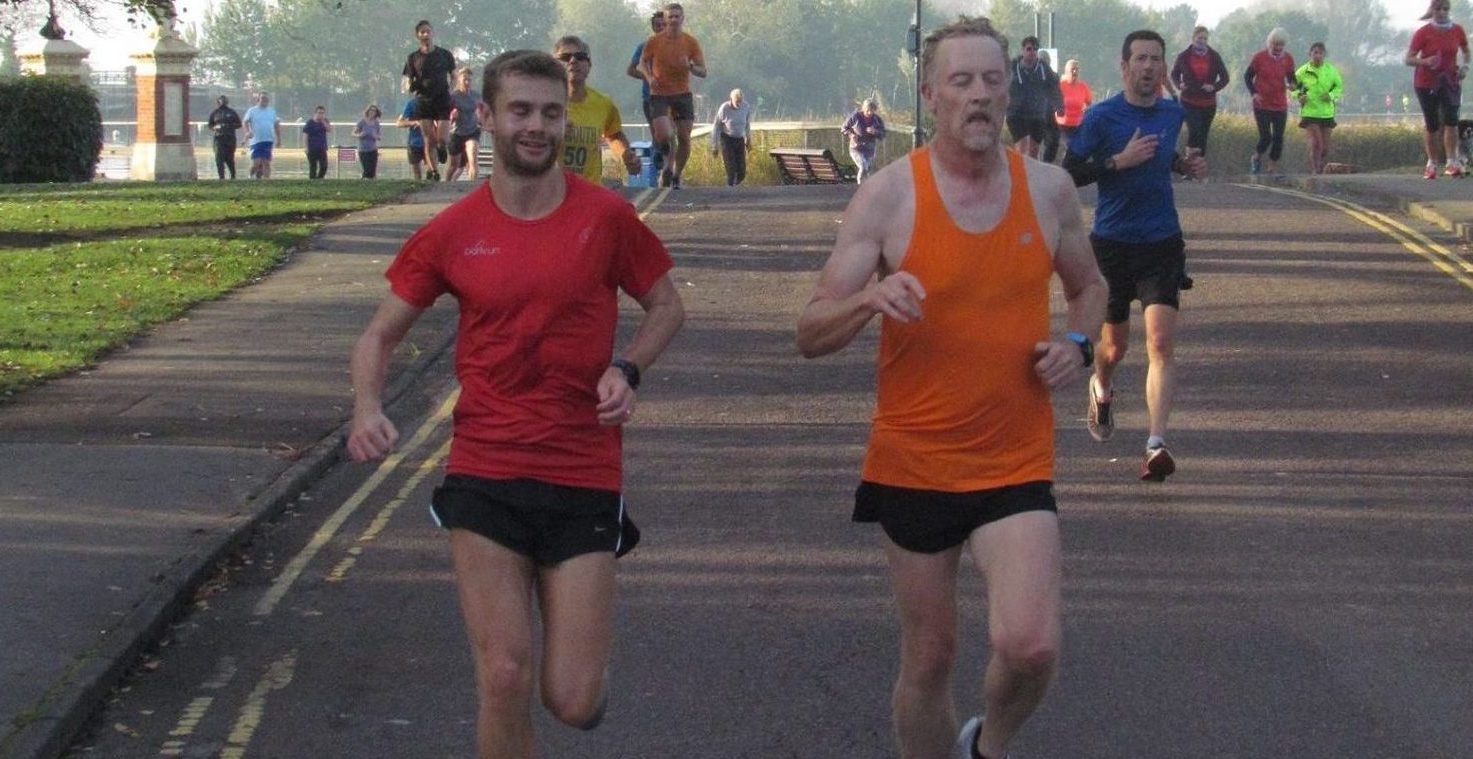 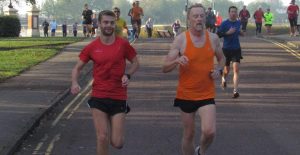 After an absence of almost four years from the road race circuit, Roy Long (right) was back out there again in the Leeds Abbey Dash, along with his son and Bournemouth AC teammate Dangerous Dave

Following a couple of spectacular performances in the Supersonic 10k at the Bournemouth Marathon Festival and the Great South Run a couple of weeks later Dave Long was going into the Leeds Abbey Dash full of optimism.

After setting a blistering new course record of 30:42 in the BMF 10k and getting some well earned TV time in the Great South Run after being up with a lead group containing greats such as Chris Thompson and Andy Vernon, for the first couple of miles at least.

Going on to finish in an incredible time of 49:55, it was a magical day for Dave and even by his high standards, delivering a sub-50 10-mile performance was something that seemed almost inconceivable.

All that made the prospect of another 10k PB at the Leeds Abbey Dash seem very realistic. In fact, there was even a possibility that if he hits the heights of his previous two performances, he could break 30 minutes. 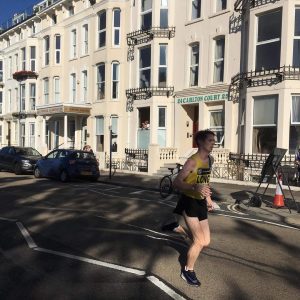 The Leeds Abbey Dash is renowned for being on the flattest and fastest 10k road races in the country. And it’s certainly one of the biggest, with over 8,000 people taking part.

The premise of the race is to raise money for Age UK, a charity that helps care for older people who are on their own and feel isolated and lonely.

Dave’s Dad, Roy, who is also a member of Bournemouth AC, was also in action at the Leeds Abbey Dash. Much like Dave is now, Roy himself was a top quality runner in his hay day.

After some years out, Roy has started to make a comeback over recent months and has been joining some of the BAC training sessions on Tuesdays and Thursday evenings.

He’s also done the odd parkrun here and there and has seen his fitness improve and his running progress really well over that time. He hadn’t actually done a 10k race since 2014 though, so he could have been forgiven for being a bit ring-rusty.

The last proper race he participated in was the 5,000 metres on the track in the Southern Athletics League fixture at Yeovil in May. Still, Roy felt it was worth giving it a go and it would be an opportunity for him to see where he’s at with his running comeback. 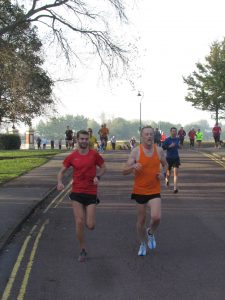 Besides the odd parkrun here and there, Roy’s lack of competitive racing left him unsure of what kind of performance he would be able to produce

The route for the race was around the metropolitan area of Leeds city centre. When the race started, Dave shot off like a rocket, looking to be up there battling with the front runners.

Going through the first mile in a staggering 4:38, it certainly looked as if it was going to be a ‘boom or bust’ occasion for Disco. Even going that quickly though, he still wasn’t in the lead, which gives an indication of the amazing standard of field that this race attracts.

Unlike at the Bournemouth Marathon Festival, he wouldn’t be struggling for competition to help push him to new heights. For his second mile, he posted a 4:47, which was still super-quick. After that though, he began to feel the effects of his incredibly fast start.

In the third mile, he went over the 5 minute mile marker and he knew then that it was going to be a tough run-in for the remainder of the race. 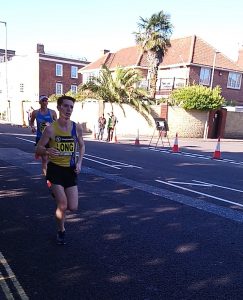 After a blisteringly quick first couple of miles, Dave blew up and ended up suffering for the rest of the race as a result

To his credit though, Dave kept on going and was still banging out the miles at a pace that most people could only dream of. It just wasn’t the performance he was hoping for though.

Crossing the line in 31 minutes and 40 seconds, Dave registered 62nd place in the overall standings. That was an impressive time by most peoples’ standards and it was staggering to think that 61 of the participants were able to run it in a quicker time than that. Again, that underlines how fiercely competitive this race was.

It’s all part of the learning process for Dave though. Even an athlete at his level can still get it wrong sometimes. Achieving great results in running is all about pushing the boundaries of what you are capable of. That of course, carries with it a certain level of risk.

The race was won by Adam Craig, who finished in a tremendous time of 29:08. Seven men in total managed to get under that hallowed 30 minute marker and amazingly, 32 men went under 31 minutes. It truly was a phenomenal standard.

In a surprising turn of events, it was actually Roy rather than Dave who really stole the show. Roy put in an astounding display, running consistently at sub-6-minute miles throughout the race. In fact, in three of those miles he was at 5:45 pace or under. 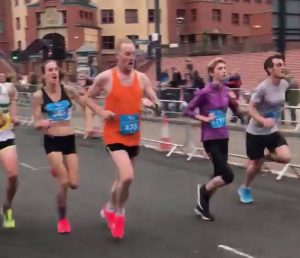 Rolling back the years, Roy found himself in much better shape than even he expected as a raced round the fast, flat course at a very impressive speed

As he approached the finish line, Roy could scarcely believe it himself when he looked at his watch and saw he was in for a sub-37-minute time.

Crossing the line in a remarkable 36 minutes and 35 seconds, Roy came in at 366th place overall. It really was a bolt out of the blue from Roy and gave him 5th place in the MV50 category.

It just goes to show, provided they are willing to work for it, once a runner has a certain level of ability instilled within them, it’s always possible to bring that out, no matter how much time has passed and how many injuries and difficulties they’ve had to overcome.

In truth, Roy knew he’d been running well in training and had been making every effort to try to get the best out of his sessions whilst being careful not a push it too far and risk triggering any injuries. He had no idea he was in good enough shape to run a 36:35 10k though. It was certainly a pleasant surprise. 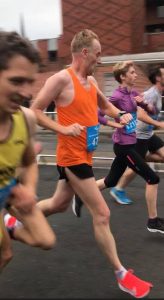 Glancing at his watch as he approaches the finish, Roy is shocked to see that he’s in for a superb sub-37-minute time