Runners up spots sealed for both BAC teams at Boscombe 10k 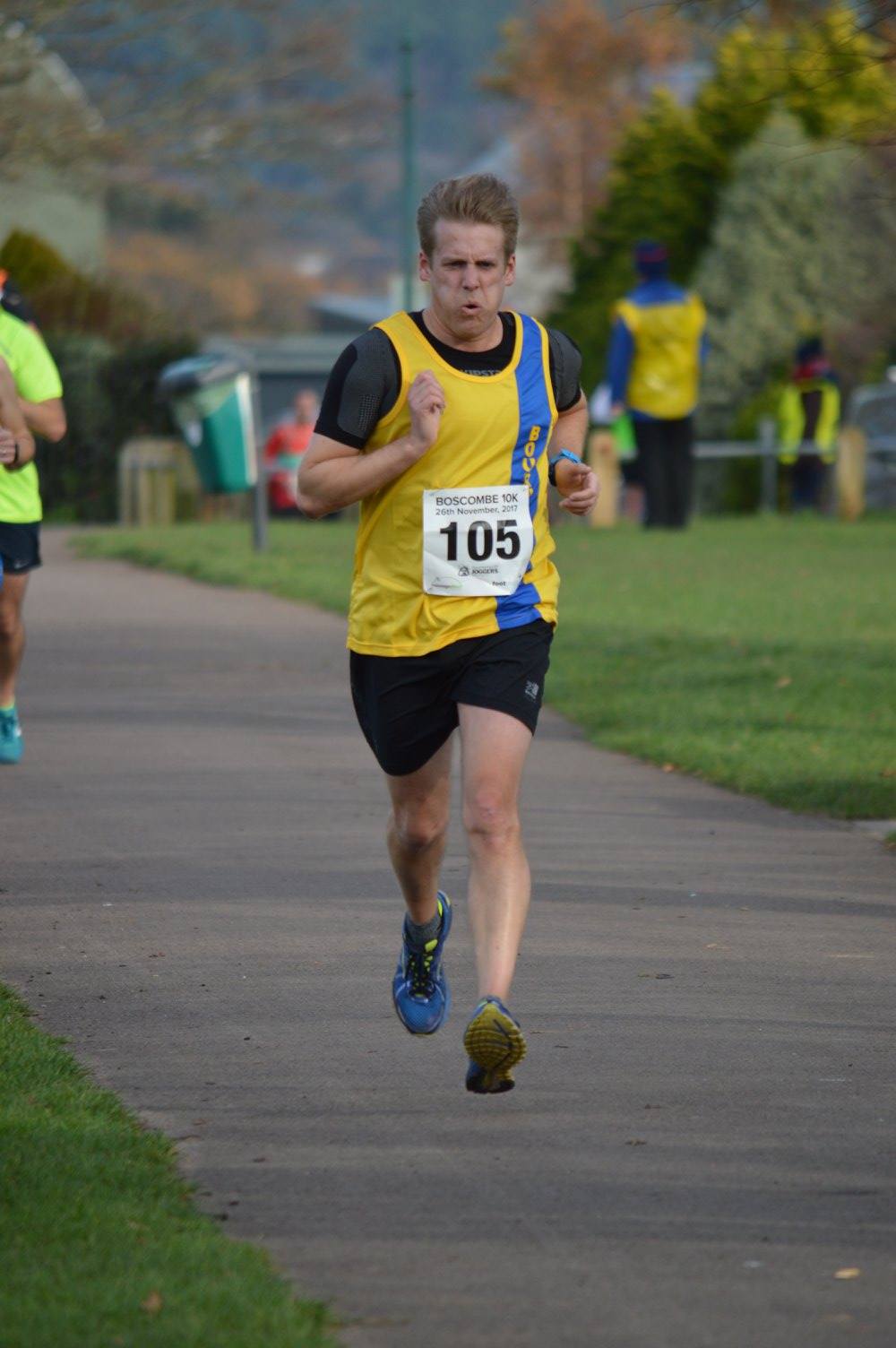 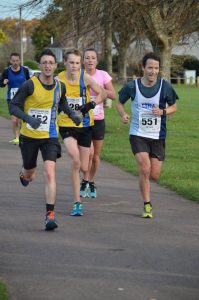 Going into the last Dorset Road Race League fixture of the season, both the Bournemouth AC Men’s and Ladies teams knew they would not lifting the league title this year. This was a very different situation for them to be in, given that both have won their respective leagues for the past four seasons, with the men’s team finishing first every year since 2009.

It’s been a difficult season though and with so many of the top members being unable to turn out on many occasions it was always going to be an uphill battle. This was either due to injury or just simply having other priorities, whether it be spending more time with the family or training for high profile ultras.

That aside though, the yellow and blue crew were determined to finish the season on a high and seal a 2nd place finish for both the men’s and ladies team. Although the Boscombe 10k is staged at Kings Park, it’s actually the Bournemouth Joggers who organise it, which gives the BAC team an opportunity to take a back seat and enjoy the occasion, taking in some tea and cakes after the race to celebrate the season’s accomplishments.

There was still business to take care of out on roads though of course. Nikki Sandell was looking to seal the trophy in the ladies league. She had been fearing that Clare Martin of Purbeck Runners could steal her crown if the Achilles injury she’s been suffering with recently impaired her too much. She did know that a top ten finish would be enough to confirm her victory.

As it panned out, Nikki finished as the 6th placed female on the day, crossing the line in a time of 41:19. This put her in 88th place overall out of a field of 533. Clare Martin didn’t actually show up anyway but she had already done 7 out of the 12 races so she had a result in the bag for each of them regardless. 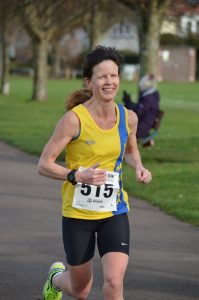 After missing the last two fixtures following her injury, Nikki knew she had to at least complete the Boscombe 10k to bring her up to the magic 7. At least Nikki’s win in the individual standings meant there was still a moment of glory for Bournemouth AC in an otherwise modest season.

Yvonne Tibble had a very good season, finishing in 3rd place overall and the final ladies standings. At the Boscombe 10k she claimed yet another F55 category win to add to her impressive overhaul. Her time of 43:28 put her in 120th place overall.

Emma Dews was the second lady over the line behind the magnificent Joanna Hanna of Poole AC who finished 28th overall in a time of 37:26. Emma’s time of 38:33 put her in 45th place overall which was still a fantastic result. 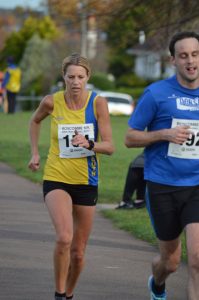 The overall race winner was once again Craig Palmer of Littledown Harriers in a blisteringly fast time of 34:16. Craig has been running for BAC in the Hampshire League Cross Country races recently and has proved a great asset in that competition and with his spate of recent road race victories it’s easy to see why.

The first fully fledged BAC member to cross the line in the race was actually Laszlo Toth who finished in a breath-taking time of 36:38, which put him in 18th place overall.

Laszlo has been training with BAC on Tuesday and Thursday evenings for quite some time now but hadn’t actually officially joined the club until very recently. He didn’t actually count as a scorer for BAC in the Boscombe 10k but next season he will, which will be a massive boost to the ranks. 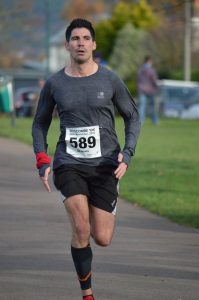 Richard Wade took 36th place in a super strong time of 37:52. Richard is another who has quite recently signed for the club and again, we’ll be looking forward to seeing him turning on the style in next season’s DRRL fixtures. 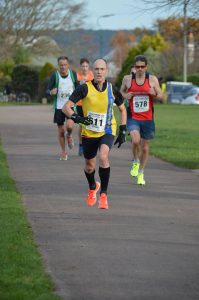 The conditions on the morning of the race were quite good for running, although it was rather chilly. Even Paul Consani was wearing gloves, which gives some indication of  what the temperature was like as the runners attempted to warm up beforehand. If a Scotsman is wearing gloves then you know it must be cold. 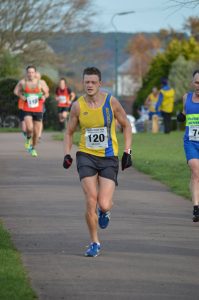 That didn’t slow Paul down though, as he gave a very impressive display, finishing in a time of 38:41, which put him in 46th place. Not far behind Paul were Richard Brawn and Harry Sherwood who finished in 50th and 51st places with literally a second separating the two. 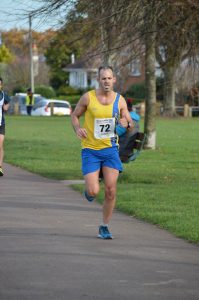 Richard’s time of 38:57 was a terrific new PB and it was in fact the first time he’d gone sub 40 for a 10k. Richard had been having a bit of a battle with Adrian Townsend throughout the race, with Adrian seemingly catching Rich up at any point he took his foot off the gas.

Rich had been surprised to overtake Tom Paskins at around the half way point in the race, with Tom struggling to replicate his best form over the latter stages of the season.

The main hill of the race was Queens Park West Drive, which is one that BAC often use for hill training on Thursday nights. It was on this hill that Tom actually overtook Rich again but once they got to the top and the ground levelled out again, Rich was able to kick on.

He wasn’t about to let this golden opportunity to beat the great Tom Paskins go amiss and he managed to crank the pace up significantly in the last mile.

Harry had also finished really strongly and had caught Rich up as they entered Kings Park to approach the grand stand finish. Rich managed to stay ahead though, with a small gap between the pair as they embarked upon the lap around the track before reaching the finish.

Harry put in an incredible sprint finish which saw him cross the line only a second behind Rich. In fact, because it was a chip timed race, Harry did actually get a quicker time than Rich as he clocked a 38:56. This was also a magnificent new PB for Harry. Harry is another new member, having only just joined the senior ranks and, at a very young age, it is clear to see he has a very bright future ahead of him. 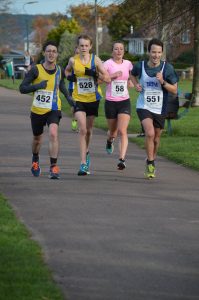 Tom finished in 57th place in a time of 39:08, which is a very moderate time by his standards. There was still some good news for Tom though as he finished the season as Bournemouth AC’s best placed individual in the men’s rankings, with the combined results of his other 7 appearances putting him in 11th place. Nine seconds later Adrian crossed the line to take 60th position in a time of 39:17. 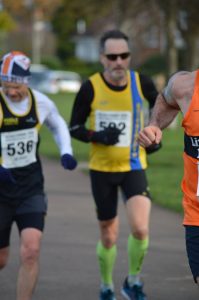 Harriet Slade secured a brilliant new PB of 40:37 to take 76th place overall. She was also 5th lady over the line, again underlining the tremendous progress she’s been making recently. 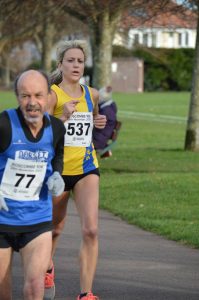 Harriet Slade chases down a remarkable new 10k PB of 40:37

The next BAC member to cross the line was Jud Kirk who completed the race in a time of 42:38. This put him in 106th place overall and 3rd in the M55 category.

Jud was the second highest BAC member in the men’s individual standings for the DRRL, with the best 7 of his 8 appearances putting him in 31st position. This showed that although Jud perhaps hasn’t been running as fast as he would’ve liked, he’s still been very consistent in his performances. In fact, he was a highest placed out of anyone in the league in the 55-59 category. 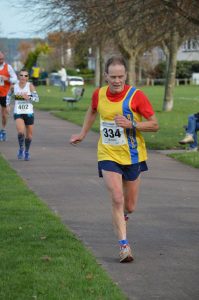 The next two BAC members over the line in the Boscombe 10k were a pair who have both been making huge strides recently and thus it wasn’t too much of a surprise to see them both set terrific new PB’s. 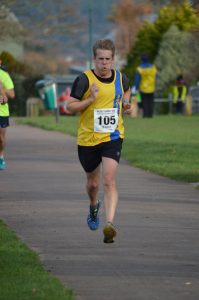 Phil Cherrett powers his way toward a fantastic new PB of 43:15

Phil Cherrett finished in 116th place in a time of 43:15 and Steve Parsons came in 121st in 43:31. The pair ran together for the vast majority of the race, pushing each other all way before Phil opened up a small gap in the closing stages. 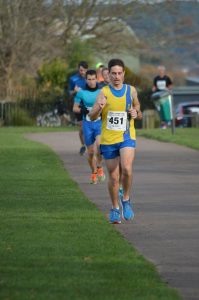 Steve Parsons gets his colour coordination right as he bursts through for super new PB of 43:31

It was another BAC pair that crossed the line in close proximity in 176th and 177th positions with Andy Gillespie just beating Tamzin Petersen to the tape by a single second.

Andy of course prefers longer distance races and is more of a marathon runner than a shorter distance competitor. He’s still always prepared to do his bit for the team although he doesn’t always enjoy the prospect of having to run at the much faster pace than he would normally. His finishing time was 46:09 which put him in 5th place in the M55 category. 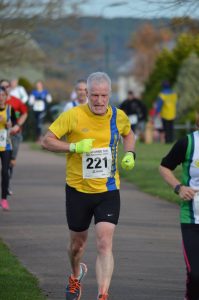 Although Tamzin had a very good run to finish in 46:10, she was frustrated to find that she had come in just 2 seconds off her 10k PB, which was set in this same race last year. Tamzin was 8th in the senior female category. 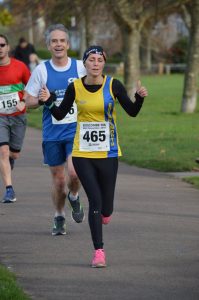 They may not have won the league this time round but it was still a season of many successes for BAC and they can still be extremely proud of their efforts.

Nikki Sandell won four of her races and also finished 2nd and 3rd. Then there was Jacek Cieluszecki‘s two amazing victories in Portland where he just blew everyone else away, plus a win in the Lychett 10 earlier in the year. It seems like a long time ago now but Steve Way had a 1st, two 2nds and a 4th place in the first four fixtures of the season. There was also Toby Chapman‘s blistering win in the Littledown 5.

In fact, every single BAC member who took part in any of the races has helped to contribute to a good season and they certainly earned the vast array of cakes that were consumed in the office after the conclusion of the Boscombe 10k.

No one deserved it more than team captain Rich Nelson though, as he battled hard to get a competitive team together for each race and ensured everyone was well trained and prepared for the task ahead. He was also always on hand to give his team members all the support and encouragement they needed every step of the way.