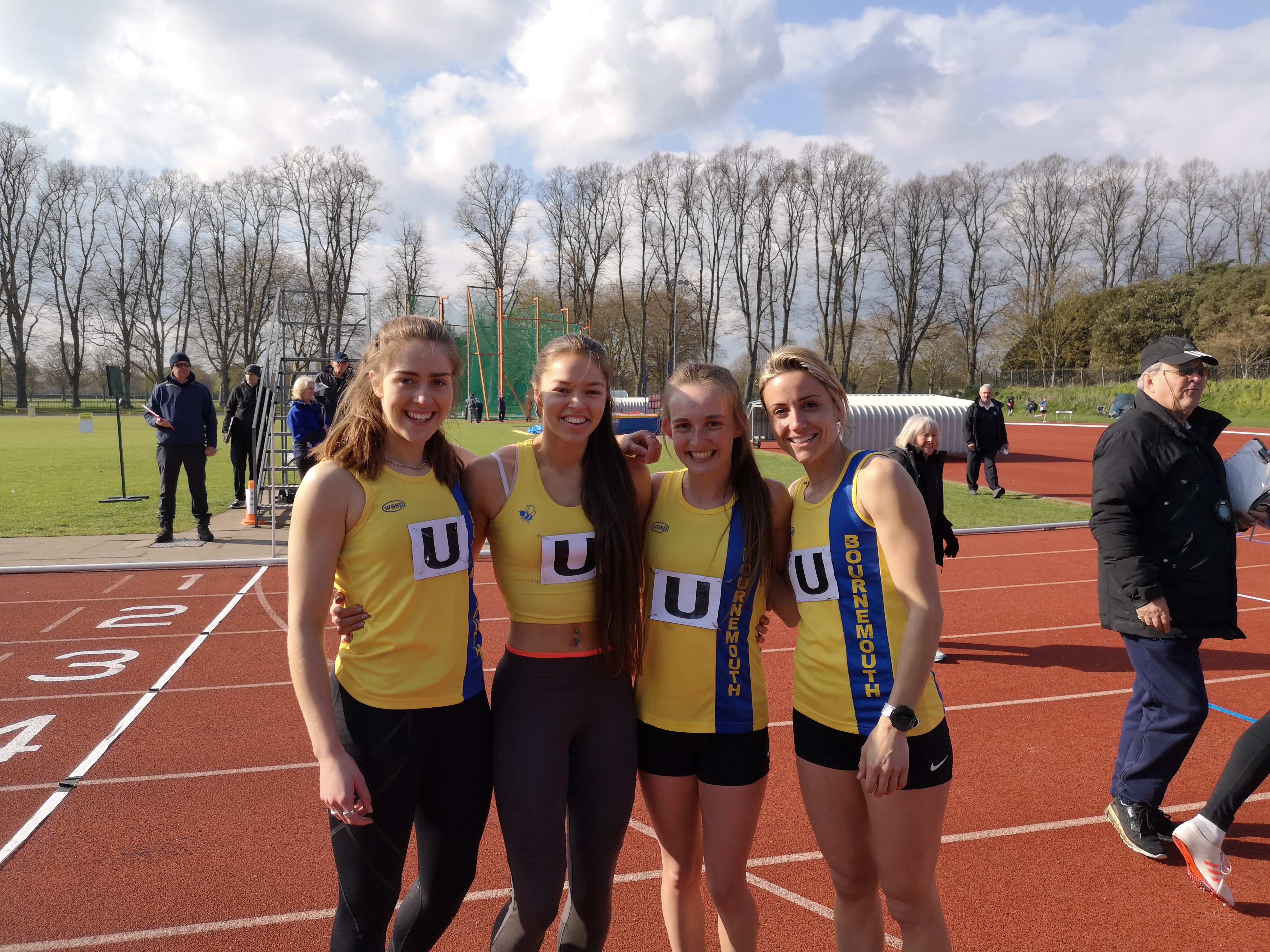 A new season and the first SAL was upon us and this year we are in the top league, Division 1.

Saturday was bright & cold with a full bus headed off to Eton. The prospect of taking on some of the best teams in the country might dampened spirits but not in the slightest. The team arrived in true BAC fashion – loud and laughing.

Saturday was at the first time out for many of BAC’s younger athletes. How would they manage this new and competitive environment?  Well brilliantly. They sprinted and jumped ahead on many of their older and more experienced competitors. It certainly shows that BAC’s athlete development is doing something very right.

However, it was not just a day for the young, some of our older members, notably Steve Dobson took 2nd place in the shot with 9.18m– an amazing result. Andy Sherrin was 3rd in A string with 10.97m, although he was unhappy with his performance, the points were great against a tough field.

Due to many athletes being unavailable, several athletes took on multiple events during the day. So many athletes put in huge performances with so many PB’s to mark the day. 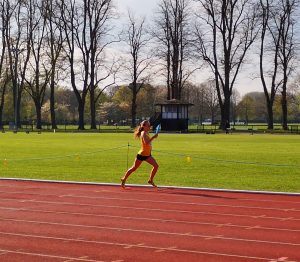 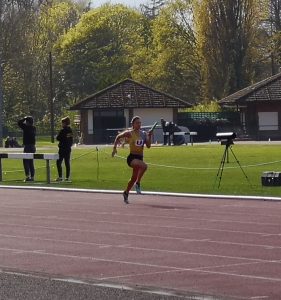 We also had impressive performances from slightly older athletes, Janet Dickinson (sorry Janet).  Janet’s performance in the 400mh hurdles against a class field was HUGE. She came 3rd.  As well as high jump and 400m.

Chloe had a very strong 400m in 61.2, coming 3rd against some tough competition.Our SAL woman throwers are one of our solid strengths in the team. Today was no exception. Danielle, Issy, Amelia and Olivia were all excellent.

It was an impressive win for Olivia Galloway with a 10.39m shot putt and a Javelin throw of 37.40m. Amelia Dobson claimed 2nd place in javelin with 22.11m.

Danielle is going to have a great year; winning the hammer, 52.23m and 2nd in discus against one of the best throwers in the country; simply outstanding. Issy had an fantastic performance with a 2nd place score in the hammer, 38.87m and threw the discus 24.08m.

It was a mother and daughter affair in the woman pole vault; Nikki and Anya Sandell. Anya had a great performance with a 2nd B string jump of 1.80m. It’s only a matter of time before Anya leaps head and shoulders above her mum, obviously Nikki is a great role model and inspiration, having jumped 2.30m before going on to run the 1500 and 3000m. Anya also did high jump and ran a great 800m. 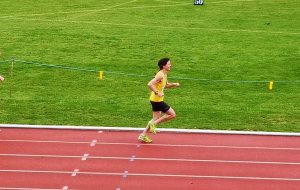 It was a good day for the jumpers with a top scores in triple jump with Madeleine Smith and Amelia winning by a convincing margin, 11.45m and 9.94m respectively and Amelia’s long jump was 4.41m. Lana Blake jumped an impressive 5.19m for 3rd place points in A string.

Harriet Slade was very convincing in the steeple and left delighted with a new PB of 7:42.8 and impressive 2nd place, a well-earned and massive PB of over 20 seconds. 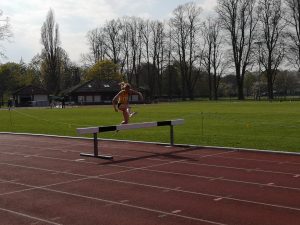 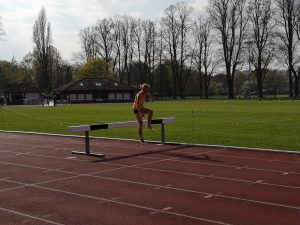 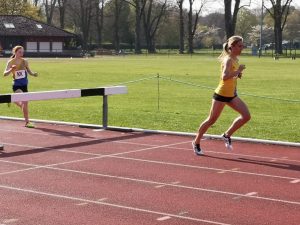 The relays were equally impressive. The woman 100m relay was outstanding, leaving the other teams for dust. The winning time for the woman’s 4x100m team close to the senior club record which has stood for nearly 30 years.  Well done Brooke, Isabelle, Lana and Chloe. It was great to watch.

The woman’s 4x400m team was a sterling effort by a mix of middle distance runners and sprinters; all willing to go that extra mile for the team, (well extra ¼ mile).
Well done Harriet, Holly, Olivia and Chloe! 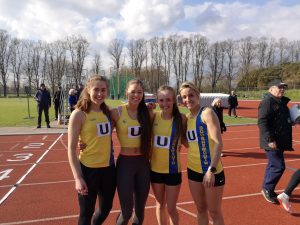 The men were missing a few of their regulars.
So up stepped Adam Nicholas, Fraser Spall, Andy Brown and Steve Cox.
Steve actually earned the name superman from the commentator as he ran from event to event – what an inspiration Steve. We need to get you a cape for the next match (perhaps leave the red pants at home). 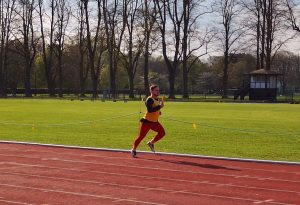 Two of the stand out races for the men were the 400m and the 5000m events.  Kevin and Muris in the 400m were on form and both crossed the line ahead of the rest of the field. TOP POINTS.

The 5000m saw Josh King and Rob McTaggart take to the field. These two have trained so hard over the winter. They wanted a hard race and that’s what they gave everyone else. Our BAC men led from the start. They took a group with them and slowly dropped them off. It was a great race to watch. Well done Josh winning the A and Tag winning the B. Tag went on to run in the London marathon, a talented distance runner in our midst. 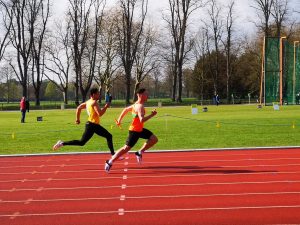 A few special mentions. Firstly to Andy Brown for beating Andy Sherrin in the discus – NOT FUNNY (says Andy).
To Ryan… who woke up feeling like death yet turned up and did the job.
Also Fraser Spall… who did everything asked of him; Javelin, Long Jump, 1500m, High Jump and Steeple Chase where he showed off his diving skills at the water jump. Thanks Fraser you are a team manager’s dream.

Others may have been missed but their effort has not been forgotten. Thank you to everyone competing, supporting and being involved to make it another great day!

We have a tough year ahead of us. We need every athlete in the club to get stuck in.
The spirit of the SAL is what our team managers, Andy Sherrin and Jemma Bates love about athletics.

Well done to you all. If we carry on as we did on Saturday it’s going to be a very enjoyable year.
Andy Sherrin

THE NEXT MATCH IS ON THE 19TH OF MAY AT CRAWLEY.
GET IT IN THE DIARY.