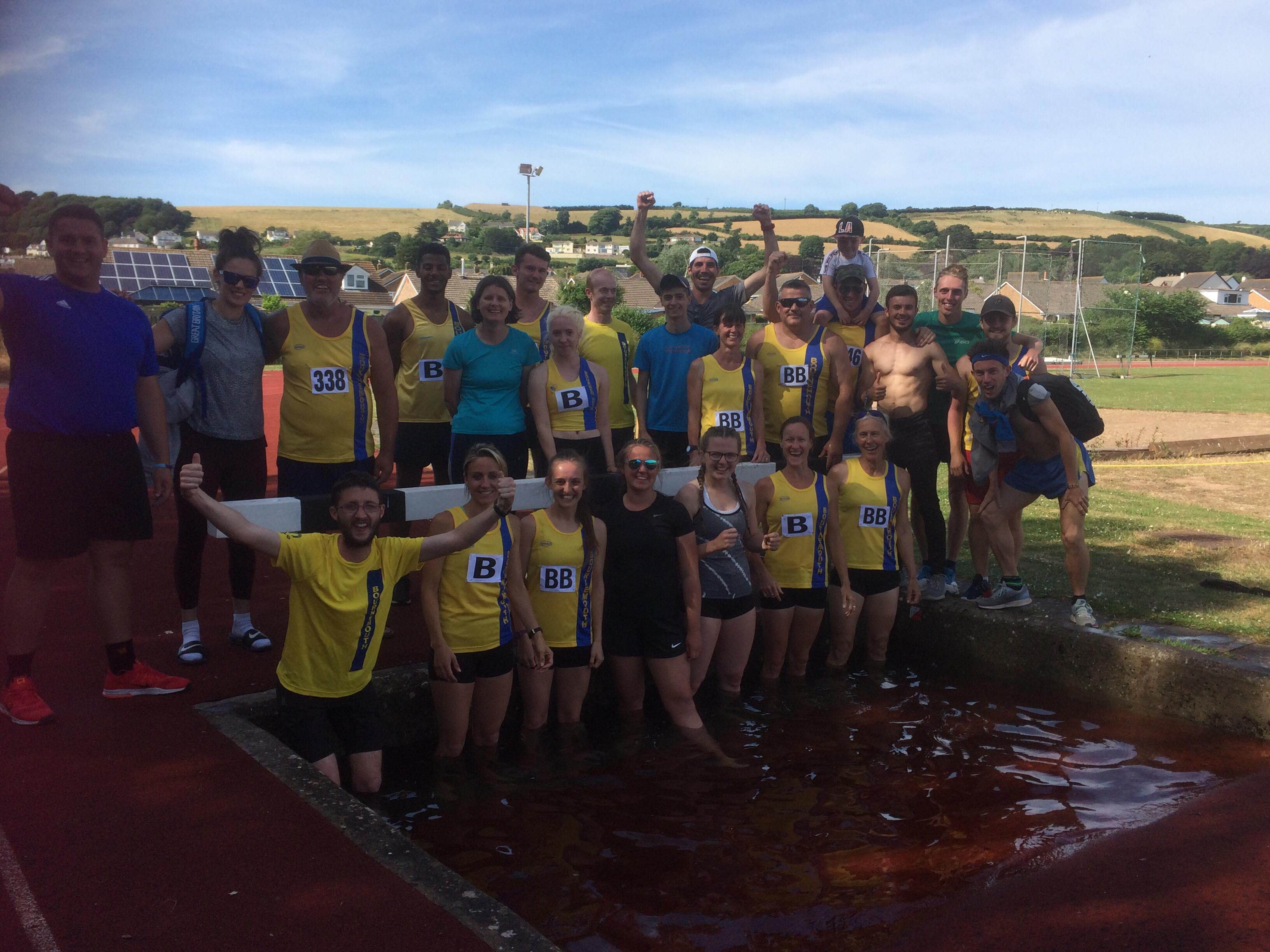 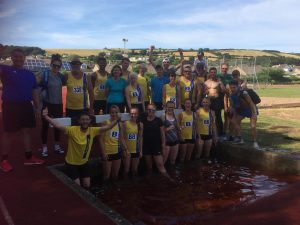 The long journey to Braunton, Devon was well worth making for the BAC men and women’s team as they triumphed against Radley AC, North Devon and Aldershot. Although it was a convincing win, BAC were pushed hard by Radley who at times were just 3 points behind. A consistent and courageous battle determined a strong finish, putting BAC over 25 points ahead with 214 points and Radley AC on 187.

On the day, the SAL team had an early start, the coach left the Kings Park tarmac at 7am sharp. Considering the long journey they left with smiles, plenty of noise and lots of laughs.
The weather was amazing with the sun a blazing – so was the performance. In fact BAC were on fire with some sporting some very interesting sunburn marks.

It was great to see many new faces making their debut for BAC on the Track & Field scene including Tom Paskins and Laslo Toth.

Some notable performances by the throwers included Danielle Broom and Issobella Shepherd (coach Paul Rees) who fought hard to keep it going in the heat and scoring well for the club. Danielle performed well, with wins in the Shot 10.74m, Discus 41.60m and Hammer, 51.37m as well as a brilliant final leg on an amazing 4 x100m relay team. Issobella threw the Hammer 20.27 and Shot 7.70m in addition to a debut Triple Jump effort to gain extra valuable points and add to her growing list of events contested. 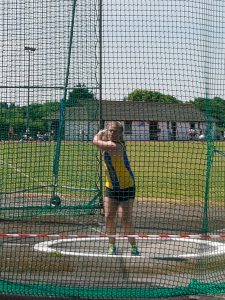 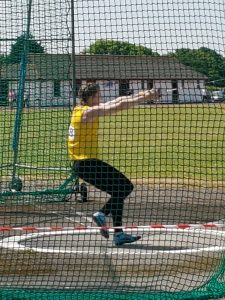 Other Bournemouth throwers included the superb Phoebe Dowson, exceeding 53m again in Discus! Dan Brunsden had a great day with a PB in Hammer 47.14m, wins in Javelin 39.37m, Shot 14.20m and Discus 45.49m. A clean sheet of wins in the throwing events for Dan and he also did high jump to maximise points for the team. Dan’s high jump was the talk of the town or more accurately the track. He managed to scale 1.25m for 3rd (same height as 2nd) and with one attempt he remarkably used his well-built, muscular frame to obliterate the entire high jump facility. Impressed witnesses talked in awe of his exceptional efforts and performance, putting many to shame. 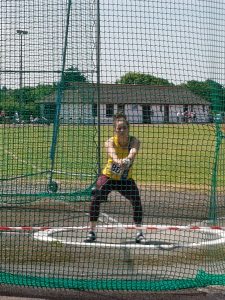 Andrew Sheerin was also on great form throwing a PB in Hammer 37.79m for 1st place and a great shot result, 1st place with 10.96m. Another win in the javelin 29.90m SB. Andrew also scaled the pole vault using an incredibly unique technique, rolling in mind air, up and over the bar like an acrobat. It’s difficult to do it justice in words but he was awesome, clearing 2.20m for 2nd place.

Steve Cox was also on top form in the pole vault and came 2nd (A string) with a PB, 2.60m. It was an exciting performance to watch as the bar went higher and higher. In true BAC form, Steve also pulled in numerous points by covering a multitude of events with zest and enthusiasm, always supporting the action. He ran a PB in the 400mH 85.0 for 3rd, 1st in 200m 30.6, 800m PB 2.52.2 and 4th Steeple which was unfortunately an unofficial time due to the error of the officials. Nevertheless the standings remained, the points were added and the passion to win continued. 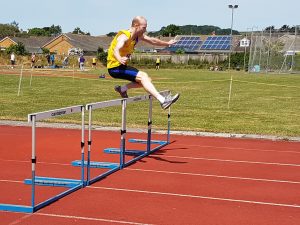 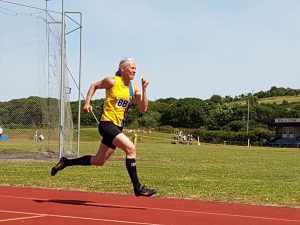 The South West multi events championships took place the same day and this presented a challenge to fill gaps in events as several BAC athletes were unavailable, particularly the younger ages. This left gaps to fill in sprints and a complete change of 4x100m team which comprised of throwers and middle distance runners. They performed so well to secure 2nd place for the senior women.

The men’s sprinters included Jack Davies and Ryan Markham’s 100m, both in 11.6. Rebecca Hannibal ran 13.3 and Jemma Bates 15.8 to score points for the team. Ladies Team Captain, Jemma ran 400m in 87.4 to bring in the valuable points.

Muiris Egan and Adam Nicholass performed well over 200m against tough competition in a time of 23.3 and 26.3 respectively. Again Muiris did BAC proud with a great 400m win (A) in 53.8 and Adam ran 61.5 for more valuable points. 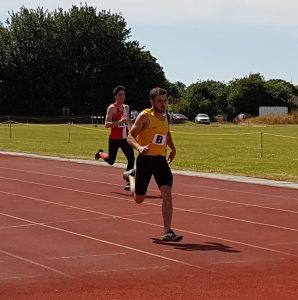 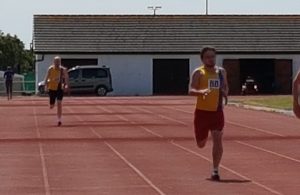 Adam Nicholass Steve Cox behind at the 200m finish

The women’s 200m saw Rebecca Hannibal return to run 27.5 and Janet Dickinson as mentioned above a class 28.5 PB. 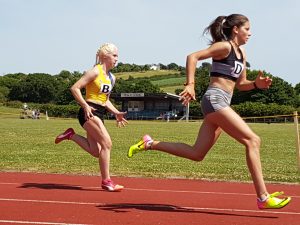 Lewis Sainval had a great match with a clean sheet of class wins in 100mH 22.0, High Jump 1.90m (both A string) and Triple Jump 12.92m (B string). He ran, hopped and jumped higher, further and faster by a convincing margin in each event. 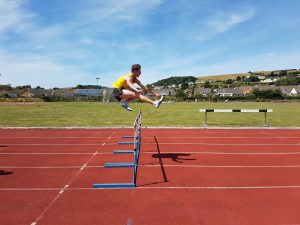 Patrick Sylla had another class win in the Triple Jump 13.48, over 2m more than 2nd place. He also jumped 6.75m in long jump, winning A string by over 1m.  Congratulations to Patrick for being donned ‘Man of the Match’!
Sprinter, Adam Nicholass won B string with 3.97m for top points.

The woman’s triple jump saw Harriet Slade and Isabella Shepherd stepping in to earn valuable points for the club. Neither athlete had any experience in the triple jump yet put in great efforts with Isabella jumping 5.01m. Unfortunately a slight mishap prevented Harriet from scoring in her one attempt before rushing off to her next event.

The team spirit continued to thrive as BAC drew closer to that ultimate win.

Tom Paskins joined the 5,000m in his debut appearance on track for BAC and ran 18:08.7. Marathon man, Tom is well known amongst the road runners and competes in a wide range of distances from 800m to half marathons. He’s not afraid of new challenges and even ran a great Steeplechase 2k for the first time to bring in more points for the team as he was 4th place (A string).

Newcomer Laszlo Toth ran a well-executed 800m in 2:09.5 (ns) before hitting the track for a 1500m PB in 4:30.3 (ns). Laszlo enjoyed his debut match, especially being part of the winning team and the great atmosphere and buzz it brings. He’s looking forward to the next match and is warmly welcomed by BAC.

The women’s steeplechase was an exciting and close race with Harriet Slade well on course to break the 8 minute barrier. However, circumstances dictated the outcome as Harriet tripped and fell during the race. Harriet showed guts and determination as she immediately jumped up and got back into her stride whilst onlookers gasped in amazement. Harriet still ran a PB and came 2nd in 8:02.7. Step aside Mo Farrah. A busy day for Harriet also saw a PB in the 800m 2:26.7 and Pole Vault (PV) 1.20m. She also ran with Nikki Sandell in the 3000m where both came 2nd in 10.56.2 and 12:02.1 respectively. Nikki performed well in the PV scaling a new height of 2.10m for 2nd A string and the 1500m in 5:48.6 to come 2nd ahead of Radley. Holly Collier ran A string and came 2nd in 5:10 which was as great result after an excellent 800m SB of 2:26. Holly ended the day with the steeplechase, her newly embraced event with another PB of 8:21for 2nd (B). 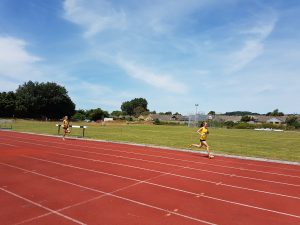 The club team performed again with determination and much enthusiasm throughout all events. Good times at BAC winning again! Paul Rees

Thanks to the Team Captains Jemma Bates and Andrew Sheerin as well as all officials and supporters alike. Your contribution to the team success is invaluable.

BAC are currently in 3rd place in the division, less than 20 points shy of Basingstoke in 2nd. The top two teams will be promoted to Division 1 and BAC have already shown their potential to achieve this so get the champagne on ice.

Next match is this weekend in Woking on 14 July 2018, where BAC will no doubt give their best performance, resulting in another fantastic day. 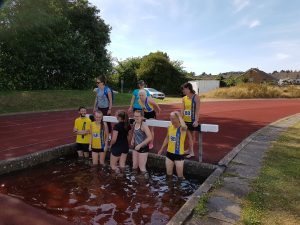 Anyone for a dip?