Sean Edwards and Chris O’Brien leg it in Lytchett Relays 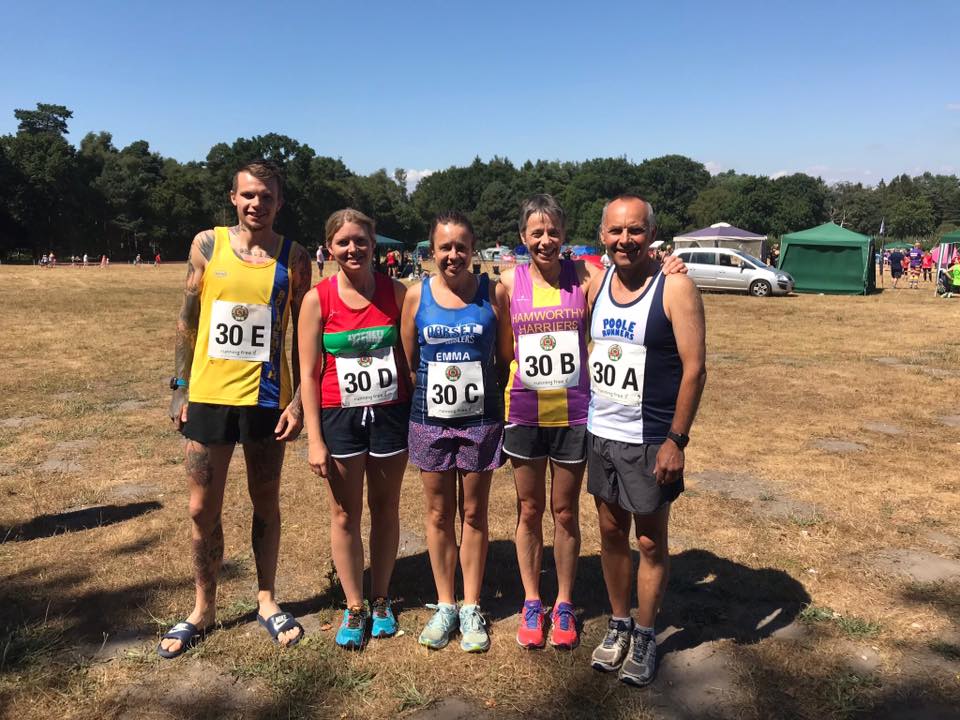 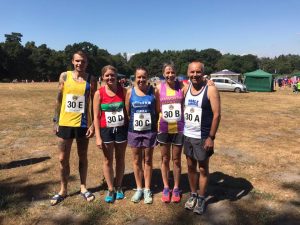 Running in the family: Sean Edwards with his unique inter-club family team

Occasionally it’s nice to get involved in an event that is predominantly about having fun and enjoying being part of a team and that is essentially what the Lytchett Relays are all about.

The premise behind the event organised by Lytchett Manor Striders is to run as part of a team of five, with each member taking one leg of the 5k off-road circuit across heathland, gravel paths and grass tracks at the scenic Holton Lee grounds.

Although it is fundamentally a competitive race, the Lytchett Relays has a fun, family friendly vibe to it and a very social kind of atmosphere to go along with it.

As well as the option to pitch a tent and stay the night, there was also a barbecue and homemade cakes, a bar that opens from the afternoon onwards, a disco in the evening, plus races the the kids to get involved in.

There are three categories for the teams to compete in, depending on whether they are comprised of all men, all ladies or a healthy blend of both. There were also categories for individuals as well, just consisting of overall male and overall female, regardless of which team the person was in.

One man who flourished in the individual competition was new recruit Sean Edwards. Sean has arrived a BAC with huge pedigree, having previously represented the club that organised the Relays event, Lytchett Manor Striders.

Now looking to step up his game even further, Sean saw Bournemouth AC as the ideal club to help him move forward with his running.

Although it was his first race donning the yellow and blue vest of BAC, on this occasion, Sean was really representing Team Extreme Edwards.

Interestingly, Sean’s transfer over to BAC meant that all five members of Team Extreme Edwards run for different clubs, despite all being from the same family.

Taking the last leg for his team, Sean ran a blistering lap, tearing round the course in a time of 16 minutes 55 seconds. That turned out to be the 2nd fastest time out of anyone on the day. Only Brian Underwood of the Poole AC Mixed team was able to better that, finishing in a time of 16:26.

Since it was in very hot conditions, with the race starting at 3 in the afternoon, and considering the course was quite bumpy in places, Sean was very pleased with his performance. He’d also done Poole parkrun in the morning on that same day, which makes his time seem all the more impressive. 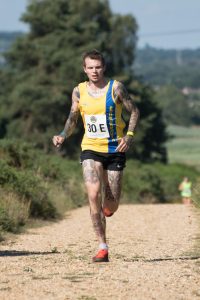 Super Sean tore round the Holton Lee course in a terrific time of 16:55 which made him second quickest individual

The other Bournemouth AC runner in action at the Lytchett Relays but under the guise of Verwood Runners was Chris O’Brien. Chris does some coaching with Verwood Runners and was helping to complete a Mens team for the race.

Chris has been suffering a bit with injury for quite some time now, having contracted a glute issue back in January. In fact, it’s something to do with his pelvis being stuck in the wrong position on the left-hand side.

It has been okay for Chris over recent months when he’s been participated in longer distance competition, like the Endure 24 event he did in June, where he completed almost 70 miles within the allotted time.

It’s more the shorter distance stuff that causes him discomfort. That is why the one 5k lap he’d be doing at the Lytchett Relays would be a good test for him.

Fortunately, other than a bit of stomach cramps, Chris felt fine throughout the run and, although it wasn’t a particularly fast time for him, he was still the quickest member of his team, completing the course in 20 minutes 18 seconds.

It was an all-male team that Chris was part of, and their total combined time was 1 hour 50 minutes and 6 seconds, which put them in 12th place overall. Out of the Mens teams that put them 5th out of 9. Individually, Chris came in at 40th place, out of a total of 177 runners.

The run gave Chris the confidence to book a place in the Hoburne 5 league race at the end of September and he’s looking forward to booking more races in the future where he can don the yellow and blue of BAC. 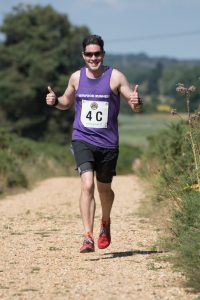 Building up his speed again to level it was at before when he completed his first sub three hour marathon at Abingdon last summer will take quite some doing, but Chris has the tenacity to get back there. It will just take time and a degree of patience.

The top lady in the individual was Fern Kimber of the Super Speedy Juniors who finished in a time of 19:48. Kate Philpotts of Poole Runners was second in 20:15, with Lucy Payne of Plumbers Mates in third in 21:22.

As for Sean Edwards, he now turns his attention to the Sturminster Newton Half Marathon, which will be his first league race representing BAC. He’s also signed up for the Round the Rock 10k the following weekend and will no doubt prove a very useful edition to the team in those upcoming fixtures.

The Lytchett Relays proved a fantastic outlet for families, friends and club-mates to get together and enjoy a day’s running, food, entertainment and all-round great fun