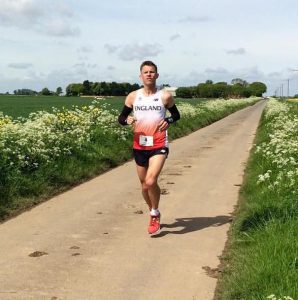 It takes a special kind of runner to even compete in a 100 kilometre ultra. The challenges that a race of such extreme distance can present are beyond imagination for most of us. But for some of those at the very pinnacle of ultra distance running, rather than being a question of “How am I going to complete the race?” it is more along the lines of “How quickly can I do it?” Anthony Clark falls into the latter category.

Anthony put in months of long, hard, gruelling training to get himself in peak condition for the Meridian Ultra National 100k. This included running back-to-back marathons and doing the OX 50k, with a half marathon training run the day before and the OX Half Marathon race the day after, which he won. During his training, 130 mile weeks became the norm, as Anthony put in the extraordinary prep work required for a race of such enormity.

The Anglo Celtic Plate is the British Athletics National 100k Championship and is contested by teams from England, Wales and Scotland. Anthony had been selected to represent England and was one of ten athletes starting the race for the team. Scotland had six representatives and a further five from Wales completed the 21-strong line up.

The standard of runners in the field was astronomical, as you would expect in a situation where all the competitors had been selected to represent their respective countries. Despite this, Anthony was determined to succeed and nothing was going to stand in his way.

It was as much of a mental battle as it was a physical one for Anthony as after the first 5k he was on his own for the whole of the rest of the race. 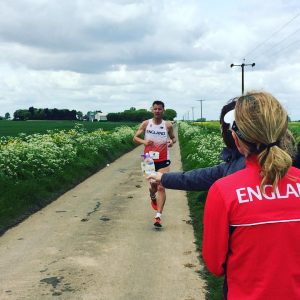 He found the last 20k particularly brutal as it was getting warmer and he was getting dehydrated with aid stations only available at every 5k point. On the plus side though, with the sun beating down, Anthony did manage to get a pretty good sun tan after being out on the road all that time.

Through a combination of incredible speed, supreme endurance and unwavering commitment to the cause, Anthony was able to get to finish line in an astonishing time of 7 hours and 4 minutes.

To put that into perspective, it’s basically like doing two consecutive three hour marathons and then another 10 miles on top that in just over an hour. That is some seriously uncompromising running.

The performance earned Anthony a silver medal, finishing just 21 minutes behind the winner of the event, Lee Grantham, who was also representing England. Anthony was 19 minutes ahead of David McLure of Scotland who crossed the line in third place. 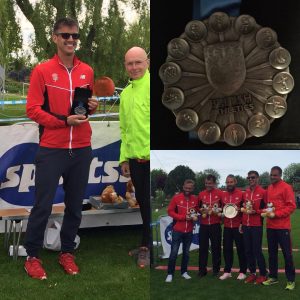 For the first 20k, Anthony was in 5th place. He then manouvered into 4th position before taking 3rd at the 55k mark. He was able to tell throughout the race where he was in relation to the other contenders and was kept informed by the England team manager who was on his bike.

At the point of taking 3rd, he could have just settled for a place on the podium but that wasn’t enough for Anthony. At 85k, he moved into 2nd place and for the final 10k he knew he had a comfortable enough lead on the 3rd placed runner and would not be able to catch the first place runner. From that point it was just a case of keeping going, as he knew if he stopped he would never get going again.

The silver medal wasn’t the only accolade Anthony got his troubles. He also claimed 27th place on the leaderboard for all-time British 100k times. This is a list that is of course topped by Bournemouth’s very own Steve Way and also contains Jez Bragg who currently sits 21st. Now Anthony has put his name on the list, there are three BAC runners in top 30.

England won the men’s team event as well, with the fastest cumulitive time of 21 hours and 12 minutes following the times of Lee Grantham, Anthony and Paul Fernandez who finished fourth. 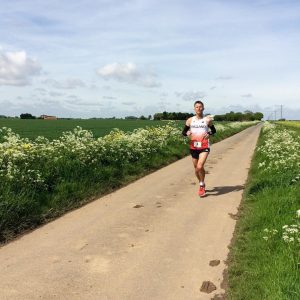 Anthony had been aiming to qualify for the 100k World Championships in Croatia 2018 where he needed a time of 6 hours 55 minutes. With an average pace of 6:38 m/m required, this was always going to be a tall order, but for the first 75k he was on track for that.

Unfortunately he couldn’t quite keep the pace going in the latter stages of the race but it was still a tremendous performance from Anthony and one he should be immensely proud of.

It was very pleasing for Anthony to get on the podium this year, having narrowly missed out after finishing fourth in the race last year. It was also an improvement in terms of performance as well, with Anthony bettering his 2016 time of 7 hours 17 minutes by just over 11 minutes.

Anthony has not ruled out entering the event again next year if selected and if he continues the progress he is currently making, there is every chance he could be going for gold next year and smashing that World Championship qualifying target in the process.

Perhaps with unfinished business, we may yet see Anthony making another appearance in this event in the future. Watch this space!