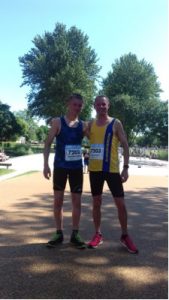 After following a strict and tailored training plan for the past six weeks, Simon Hearn made the trip up to Hull to compete in the “Run For All” Hull 10k. What was unique about this race though was that Simon was doing it with his son Sebastian, which was fitting since it also happened to be on Father’s Day.

Sebastian, who is now 17, was a BAC member when he was younger but moved away to attend Harrogate Army College. Simon knew that Sebastian had been doing some running whilst he’s been up there and had heard that he’d been posting some very good times for races of that kind of distance but he was still hoping to be the stronger of the two on the day.

The conditions were extremely hot on the morning of the race with temperatures soaring to around 30 degrees, meaning it was always going to be difficult for Simon to get the sub 40 time that he was aiming for. He set off quickly, posting a 6:15 for his first mile before settling into a more comfortable pace.

After his fast start, Simon spent the rest of the race looking over his shoulder to see if Sebastian was catching him. However, it turned out that his son had actually sneaked past him on the second mile without Simon realising, so in fact, the whole time he’d been looking behind him, Sebastian was actually ahead of him.

As Simon got close to finish, to his surprise, he overheard the commentator saying Sebastian’s name over the tannoy. At first he thought there must have been some mix up with the numbers since he hadn’t seen his son come past him, but as he crossed the line he saw that Sebastian was already there.

Simon’s finishing time was 40:37, which put him in 59th place in a field of 4,200 and 7th place in the M45 category. This was a strong performance by any standards, but especially in the intense heat.

In fact, Sebastian had actually come in 22 seconds ahead of Simon, in a superb time of 40:15, which put him in 48th position and 17th in his age category.

It was a bittersweet moment for Simon, who, whilst he was disappointed not to have beaten his son, was also pleased to see Sebastian running so well and immensely proud of him.

The crowd that came out to watch the race and support the runners was enormous and in fact, Simon had never seen so many people cheering the runners on in any race he’d done before. This helped make the occasion an even more memorable one.

Putting the competitive element aside though, it was a great experience for Simon to be able to do the race with Sebastian and for a father and a son to both be running at that kind of level is probably quite unusual so huge respect to both of them.

Simon was narrowly pipped to the post by Sebastian, with both achieving an impressive top 60 finish