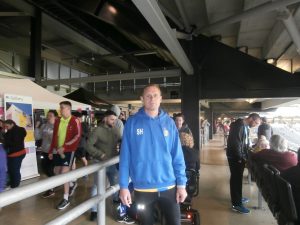 Simon Hearn prepares to take on the Milton Keynes Half Marathon

There are many different ways to spend a bank holiday Monday, some like to have a chilled one with family, others like to meet with friends for a pub lunch and a few beers. Then there are those who look to engage in something a little more energetic, like Simon Hearn for instance.

Simon took himself up to Milton Keynes to take on the MK Half Marathon. The race is part of the extremely popular MK Marathon Weekend, which includes a 5k and a 10k race, as well as the Marathon and Half Marathon.

The race kicks off from the magnificent stadiumMK, home to MK Dons football club of course, and follows wide roads and tree lined boulevards for the first five miles. The route then follows a more picturesque path through some parishes and onto Walton Lake, which is one of Milton Keynes’ richest wildlife spots.

The race then heads back to stadiumMK and finishes with a lap around the pitch, milking the applause from the crowd as you go before finally crossing the finish line.

Simon has become a dab hand at half marathons for late, having completed his last few races in sub 1:30 times. He had been following a rigorous 10 week training programme in there lead up to the MK Half and was hoping it could be another sub 1.30 in the bag.

The tactic was to go with the 1:30 pacer, who happened to be a former team mate of fellow BAC member Richard Brawn when he was with Dacorum & Tring. Richard did the Milton Keynes Half Marathon last year and had mentioned to Simon that he knew the 1:30 pacer, Jamie Marlow, would definitely be bang on.

Simon executed the plan well initially and managed to stay with Jamie up until around the 10 mile mark. Although it is billed as a fairly flat race though, there are quite a few twists and turns and numerous points where there are slight elevations that can knock your pace off track.

Over the last few miles Simon slipped slightly off the pace and wasn’t quite able to recover, costing him the sub 1:30 time he’d been hoping for. It was a very close call in the end though, with Simon still ending up with an excellent time of 1:30:35. 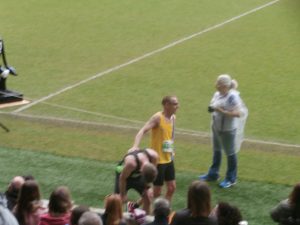 Simon adds another half marathon notch to his belt

This put him in 62nd place overall out of 3,008 finishers. He was also 14th in the MV40 category so all things considered a very good performance from Simon.

Despite not quite hitting his target, Simon was pleased with his run and thoroughly enjoyed the race, stating that he would recommend it to anyone. Knowing Simon, he’ll be back imminently and will already be contemplating his next big challenge.

Simon completed the MK Half Marathon in a superb time of 1:30:35