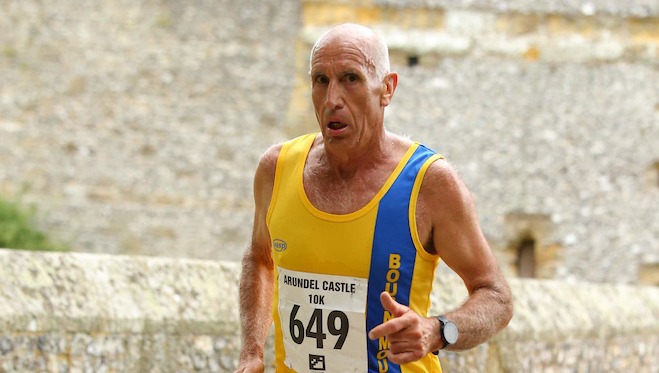 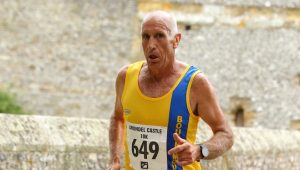 Simon Hunt was back at the races in the Arundel 10k, a race centred around the scenic grounds of Arundel Castle

Set in the grounds of the restored and remodelled medieval in Arudel, West Sussex, the Arundel 10k route possessed a remarkable backdrop that one could easily describe as being ‘fit for a king’. Hoping he would prove fit for the challenge ahead, Simon Hunt lined up to tackle the undulating course.

Having completed quite a few 10k races earlier in the summer, Simon should now be pretty adept at running the distance. His most recent was another castle-based one in the shape of the Lulworth Castle 10k. In that race, Simon showed he was home in his regal surroundings, taking 1st prize in the M60 category.

At the Poole Festival of Running, Simon also entered the 10k race, finishing in 2nd place in the M60-69 category with a very good time of 42:29. The week before that he’d conquered the Bredon Cricket Club Tower Race which took place in an area he knew well from his old college days.

Back in May he completed the 10k distance race in the Jurassic Trail event, where he finished 13th in a field of almost 200 participants. 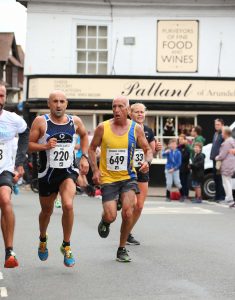 The Arundel 10k began with a lap around the town centre before heading off to the grounds of Arudel Castle via the lower gates. Once in the grounds it was mostly uphill across either gravel or tarmac tracks. 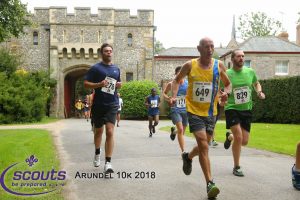 Simon races through the grounds of Arundel Castle

At the half way point there was a long downhill section across the grass, offering a bit of welcome respite before a short, sharp rise that was the precursor to the descent back to the castle. 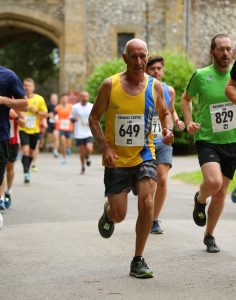 That was followed by a loop around the private grounds of Arundel Park before heading back toward the finish in the town square.

Benefiting from some good hill sessions recently in training, Simon felt strong on the uphill sections and was able to push the pace well on the tougher climbs. 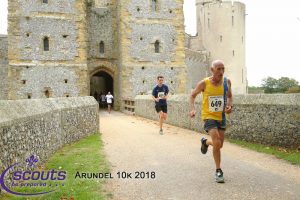 Crossing the line in 68th place overall, Simon finished in a time of 44:11. That put him 3rd in the Vet 60 category, marking a pretty good result for the Bournemouth AC man.

Simon’s chip time was equal to that of Chris Wigby of Horsham Joggers who was also in the Vet 60 category, taking 2nd in terms of placings, with Phil Guest of Portsmouth Joggers winning the category in a time of 40:38. 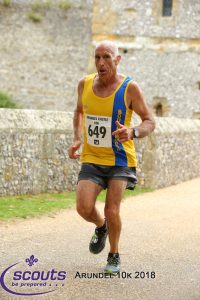 A good run from Simon saw him take 3rd place in the Vet 60 category, finishing in a time of 44:11

The race proved popular with a field of 634 people successfully completing the course. Ross Skelton of Brighton Pheonix won the race in a stunning time of 32:10. Gary Foster of Hastings Athletic Club and Andrew McCaskill crossed the line together in 2nd and 3rd place, with Gary claiming the runner up spot by virtue of chip time in 33:29. Andrew’s official time was 33:39.

The top lady in the race was Alice Cox-Rusbridge who clocked a time of 41:52. She was 32nd overall, with Lisa Hale of Sandhurst Joggers taking the runner up spot with a time of 42:32 and Julliet Stallard of Bognor Regis Tone Zone Runners in 3rd in 42:49.