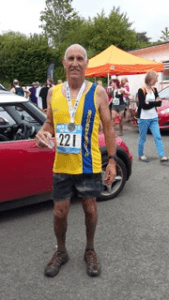 Race The Tide in Holbeton, Devon is about as far from your conventional marathon and half marathon as you could ever get. In fact, even the distances are extreme, with the marathon route consisting of 29 miles and the half marathon course being 16 miles.

When you add in the fact that there is an estuary you have to cross and it is actually a race against time to get to the crossing before high tide, you can see that this is a race with a very different slant.

This was the challenge that Simon Hunt took on when he lined up for the “Long Half Marathon” and he was not about to let a little thing like the tide prevent him from completing the tough and testing course.

The race started in Holbeton village, following an uphill route to a flooded farm track. After navigating their way through the mud and the puddles, the competitors then headed off into the forest where a few more tricky hills awaited them. 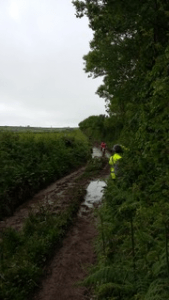 The route then came onto the River Erme estuary, where Simon had to wade through 18 inches of water for a good 100 metres. The route then took him onto a hilly coastal path before heading back inland for 7 miles.

This was the bit where Simon and a few others managed to miss the marker tape and veered off course, adding an extra mile to their race. Perhaps the 16 miles of hills, mud tracks and water hazards simply wouldn’t have been hard enough for a man of Simon’s stature.

When he eventually found his way back on the intended route, it was through the forest, back onto the flooded farm track and then downhill to the finish.

Simon finished the race in a time of 2 hours 41 minutes and 28 seconds putting him in 35th position out of 123 that completed the course. This would have to go down as pretty good time for Simon, especially considering the detour he took and the water crossing, not to mention the undulating nature of the course and difficult terrain.

The winner of the race was the only person who crossed the line in under two hours, with a time of 1:58:29, which gives some indication of how tough it was.

Simon was also 2nd in the MV60 category, so all things considered, he can be very proud of that effort in a race that was certainly not for the faint hearted.

Simon conquered the 16 mile course in 2 hours 41, putting him 35th overall and 2nd in the MV60 category