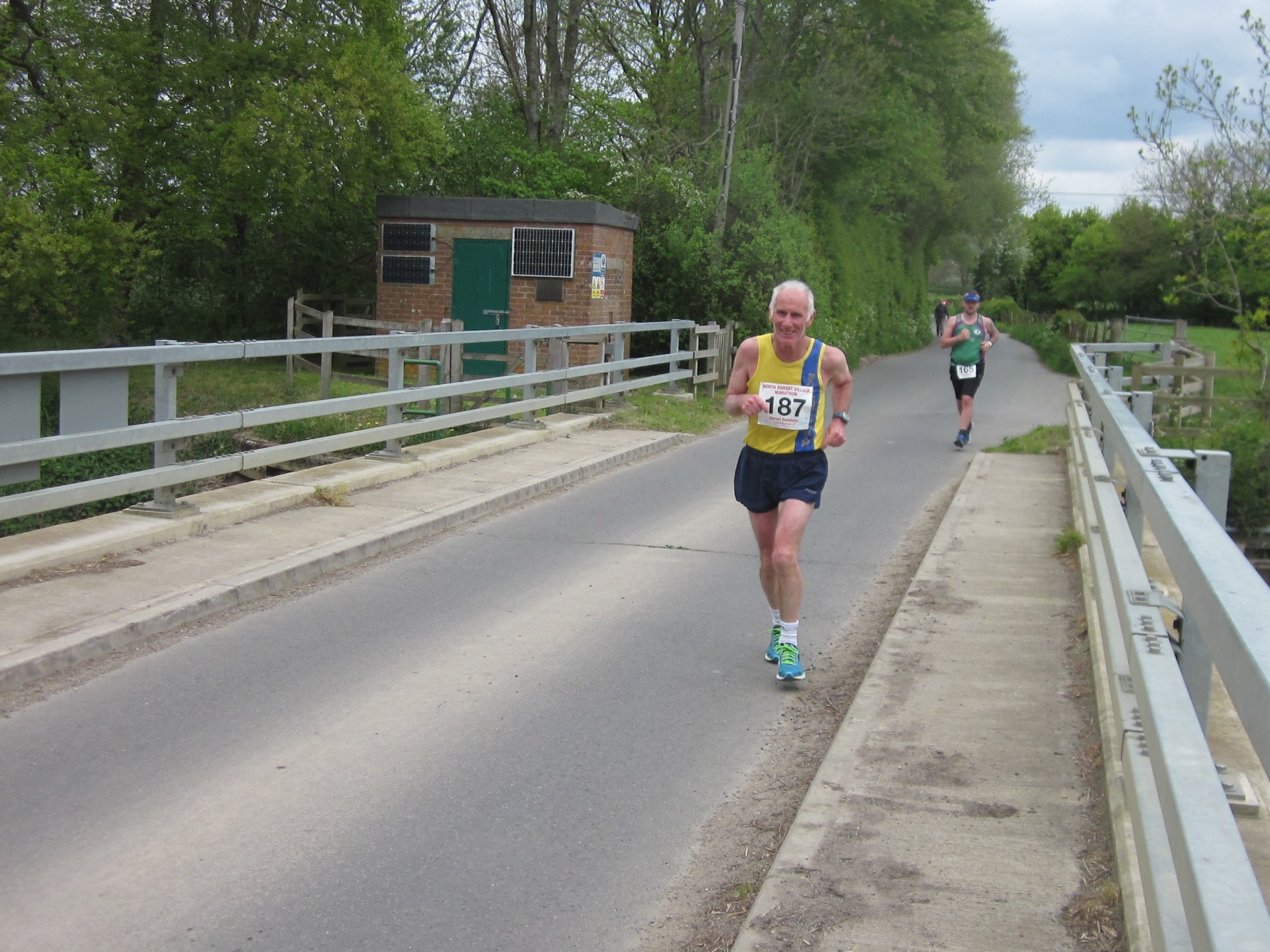 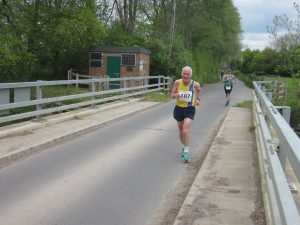 In his first marathon since 2013, Ian Graham was one of four wily Bournemouth AC foxes tackling the evergreen North Dorset Village Marathon

With the race scheduled for the weekend after the London Marathon this year, it was always going to be difficult ask for Bournemouth AC skipper Rich Nelson to get a team together for the North Dorset Village Marathon.

At one stage it looked like they might have five for the men’s league but when Tom Paskins was forced to pull out of the race and give his number up it became evident that it wasn’t going to happen this year.

Because the Dorset Road Race League is done on a best 7 of 12 basis though, you can afford not to field a team for a couple of the races so from a BAC perspective, this one was a write-off.

There were however, still some individual goals to be accomplished from Bournemouth AC members at the NDVM. At the ripe old age of 72, Ian Graham was taking on his first marathon since 2013.

He’d been eyeing up the fastest marathon time in Britain by an over 70 this year and was considering having a go at beating it.

Competing in his first marathon since becoming a proper runner, Matt du Cros entering new territory. He had done the marathon at the Bournemouth Marathon Festival back in 2016 and 2014 but he wasn’t really running much in those days so this one was going to be a completely different prospect.

For the 2019 season, Matt has set himself the target of doing all 12 of the Dorset Road Race League fixtures. That of course meant that he’d have to do North Dorset.

He hadn’t really trained for it at all though and had been on holiday in Chile for three weeks in the build up to the race so his preparation was less than ideal. He still had to give it a go though so he laced up his trainers and headed over to start line. What was the worst that could happen?

The last time Helen Ambrosen competed in a marathon was back in 2016 so it was a big step for her to take on the NVDM. In fairness though, she’d really done her homework for it, banging out some terrific long, hilly runs over at the Purbeck in the build up to the race.

When the day of the race came along, she felt fit and strong and was confident she could do well with the solid block of training she had behind her.

One man who, by contrast, had done a lot of marathons over recent times was Andy Gillespie. He was now on his 96th marathon and countdown toward the 100 Marathon Club was nearing its conclusion.

Completing the Jurassic Coast Challenge at the end of March, Andy already had three consecutive marathons to his name this year and was set to add another three at the Devon Coast Challenge the week after North Dorset.

If he managed to complete all those he’d be on 99 marathons, so would be within touching distance of the century. First thing was first though, and that was to get through the NVDM and he needed to do so unscathed.

Before the NDVM, Matt du Cros’s best marathon time was 4 hours 31 so he knew, barring a complete disaster, he would beat that. Since then, he’d become a very accomplished runner, improving massively over the past couple of years.

The conditions were a lot better than they were the previous year, when the runners had to battle scorching hot sunshine that made it a very uncomfortable and energy sapping process for most of them. This time round it was an overcast day though with a much cooler temperature making the run a bit more manageable. 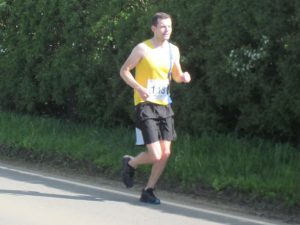 Off the back of virtually no training,
Matt du Cros was hoping he’d be able to complete the distance okay but knew it would be a tough task

Despite his lack of training, Matt paced the race like a true pro, starting out at around 7:50 pace and using that as a benchmark for the vast majority of the race.

Most of his miles were done at between 7:50 and 8:10 minutes per mile, depending on how much incline there was. Once he got over the hill that went from mile 19 to mile 20, he began to really kick on over the last 10k.

At that point he was feeling really strong and his pace went up to between 7:30 and 7:50 for remainder of the race. It was a perfectly executed run from Matt and he crossed the line in 49th place, with a time of 3:28:27.

It was certainly an effort to be proud of from Matt and underlined what tremendous promise he has. If he was to enter another marathon and go in with a proper block of training behind him, he could no doubt produce something magnificent. 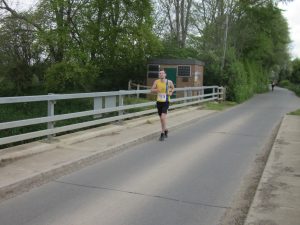 Matt put in a very solid display, racing to an excellent sub-3:30 finish

The next Bournemouth AC member to arrive at the line was Helen Ambrosen who had a superb run to finish first in her age category, although she doesn’t like to mention which age category that is!

She ran her first mile at 9:10 pace, although that was mostly uphill. She then settled in to pace of between 8:40 and 8:50 pace for the next seven miles, except for mile 3 which was mostly downhill so she went a little faster.

For the next four miles she went at around 9 minutes per mile before upping the pace to around 8:50 for next six miles. That took her to the hilly miles of 19, 20 and 21, where she managed to stay between 9 and 9:15 pace. 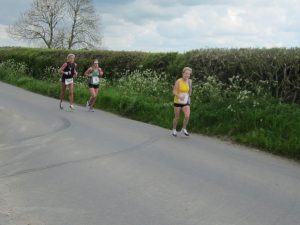 Then she was back at just under 9 minutes per mile for the last five miles to cross the line in 87th place with a stunning time of 3:54:09. Her average pace for the run was 8:54 and she had managed to stay remarkably consistent throughout the run.

It was great to see that all her hard training had paid off and she had really begun to flourish again as a result. She came in as 12th placed female on the day and was extremely pleased with her performance. 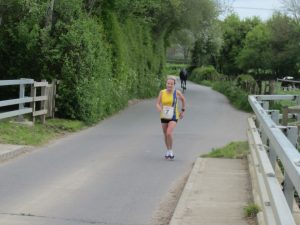 After his four races in four days over the Easter break, Ian Graham could have been forgiven for feeling a little jaded but he took the bull by the horns and turned in a terrific display to cross the line in 118th place.

With a time of 4:14:35, Ian had to settle for second place in the male over 70 category in the end as Peter Kirby of Teignbridge Trotters took the age group win, clocking a time of 4:10:34 which put him in 111th overall. 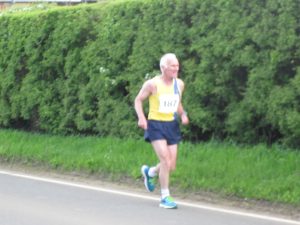 Unfortunately for him, Andy Gillespie’s run did not go according to plan. He started off at around 8:45 pace for the first eight miles. Then with the hills over the next couple of miles his speed then dropped a little.

He never really seemed to get it back onto his earlier pace after that though and by the half way point in the race he’d begun to really struggle. 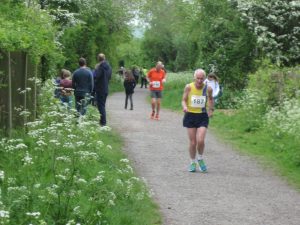 Ian secured 2nd place in the Male over 70 category

The rest of the race was a real battle for Andy. Mentally he was shot and just didn’t want to be there. Nevertheless though, Andy has never given up on any of his previous 95 marathons and he wasn’t about to let that record slip.

Soldiering on to the line, Andy completed the course in a time of 4:23:38 putting him in 131st place. Whilst it wasn’t the run he was looking for, it did bring him one step closer to the magic 100 so despite his disappointment with the performance, that was still a positive. 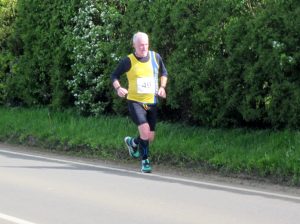 As he shuffled back to the car, he was given a massive bacon roll and that made him feel slightly better about the situation. Life wasn’t so bad after all.

He knew he’d soon have a chance to redeem himself as well as he was set to take on the Devon Coast Challenge the following weekend, where he would look to complete a further three marathons. 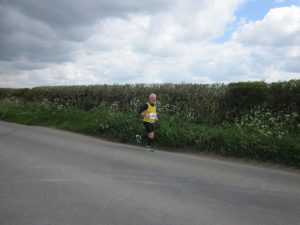 Finishing in 4:23:38, Andy was disappointed but it wouldn’t be long before he was back in the saddle at the Devon Coast Challenge

The race was won by Richard Swindlehurst of Poole AC who finished in a time of 2:46:59. Poole AC had also failed to get a team of five men together though, leaving it open for Egdon Heath Harriers to pick up the points.

The first female was Eleanor Bedwell of Clapham Chasers who finished in a time of 3:32:27, just pipping Paula Barker of Poole Runners to the post by 18 seconds. Eleanor was 53rd overall and Paula was 54th.

Heather Khoshnevis and Louise Austin of Littledown Harriers were third and fourth ladies, finishing in 3:38:30 and 3:38:48 respectively. Littledown ran out winners of the women’s team competition, with Poole Runners in second and Dorset Doddlers third.

In terms of the overall league positions, Bournemouth AC still topped the Men’s First Division table with two wins, a second and a fourth but Egdon Heath Harriers had edged closer to them with that win, giving them one win, two seconds and a fourth. Poole AC were in third with one win, a third and two fifth place finishes.

In the Women’s First Division, Egdon Heath Harriers retained top spot with a first, a second, a third and a fourth place finish. Poole Runners were second with a first and three second place finishes. Bournemouth AC are currently sitting in third with one win, one third, one fourth and one fifth place finish. 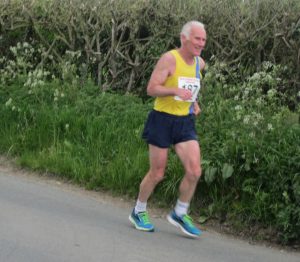