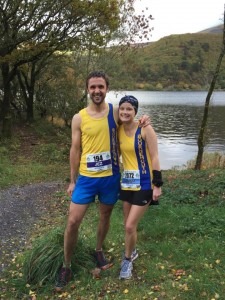 Jez and Gemma Bragg at the Snowdonia Marathon 2015

Pouring rain for at least the first hour made a tough event even tougher for Jez and Gemma Bragg as they competed in the Snowdonia Marathon, a 26 mile race in the most mountainous area of Wales, involving an ascent of almost 3000 feet. Of the 1500 who completed the race, Jez was 46th in (in his own words!) “not a great time” of 3.06.47, and Gemma ran an amazing 3.34.53 to finish 233rd.  Most of us would have been ‘over the moon’ with Jez‘s run, but he has been beset recently with injury problems from which he is now, happily, recovering, and Jez sees his run as “another positive step towards a return to health and a return to fitness”.  Jez is, of course, one of the top and best known Ultra Runners in the country, and we are very proud of both Jez and Gemma, and delighted that the BAC vest was there to be seen in such a prestigious event so far from home!

The next day, the BAC vest was on display nearer to home in the 21st running of the Stickler, an off-road, just over 10 mile, race starting and finishing at Shillingstone.  It’s tough, but it might be pushing things a bit too far to compare it with the Snowdonia Marathon!  Damian Boyle was the first BAC athlete to finish, 26th of a total of 416, in 1.15.52.  Nick Kenchington finished 67th, in 1.22.02, and Ian Graham was 157th in 1.32.19.  Also shown in the results as BAC was a certain Mike Hoey, 112th in 1.26.36.  Mike is an ex-BAC ‘legend’, and says he now runs “one race per year”.  He is no longer, sadly, a member of BAC, and entered the race ‘unattached’, but it seems he is still on the database of Dorset Doddlers, who organise this excellent race, as a member of the club.

A week previously, on Sunday 18th October, Paul Dixon-Box finished 19th of a total of 709 in the Abingdon Marathon.  Paul describes the occasion as a “tough day, with cramp from 16 miles”.  That being so, Paul did very well to finish so far up the field, in a time of 2.48.46 – a PB by almost six minutes!

With so much going on, BAC activity in the Parkruns was limited on Saturday 24 October. In the Bournemouth Parkrun, of the 368 finishers, Ian White, Steve Cox, Jud Kirk, Helen Ambrosen and Sam Laws took part, in the Poole Parkrun, of 649, Graeme Miller was 8th and Ross Smith 12th, and, in the Salisbury Parkrun,  Andy Gillespie continued his unbroken run of supporting this relatively new venture.