Steve leads the Way at the Bournemouth Bay Half Marathon 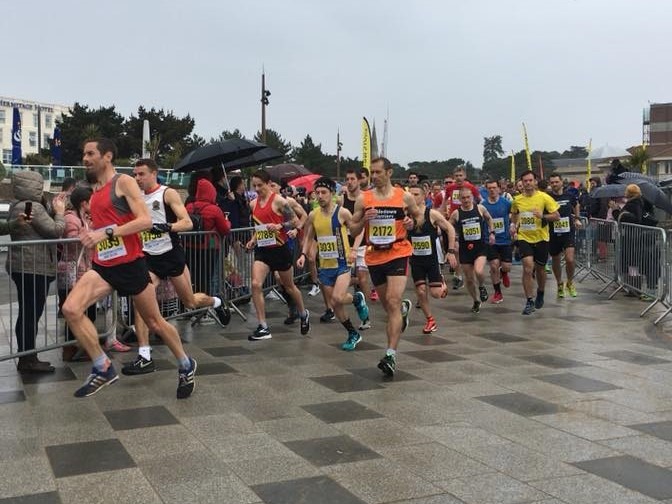 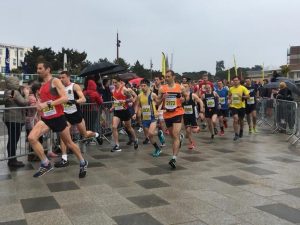 It was another great local event in Bournemouth that showed just how vibrant and popular the running scene is in this area at the current time. The Bournemouth Bay Half Marathon attracted participation from five Bournemouth AC members, including some of the club’s big hitters.

Since the race is staged with exactly two weeks to go until the London Marathon, or Southampton, the Bournemouth Bay Half is the ideal foil for those running either marathon to test themselves one final time and see how their form is ahead of the big day.

The route started at Bournemouth Pier before heading in the Sandbanks direction for the first couple of miles before turning a heading back onto the promenade. It then goes along the promenade back past Bournemouth Pier, then on past Boscombe Pier, through to Southbourne and all the way down to Hengistbury Head.

It then turns up and winds back round onto the overcliff road, following that road all the back to Boscombe where it dropped back down onto the promenade for the final stretch to the finish at Bournemouth Pier. It was pretty much the same as the Bournemouth 10 route and also the Easter Quarter Marathon that was on the week before.

One of the BAC big hitters looking to polish up his supreme skills ahead of the London Marathon was Steve Way. Steve has been in scintillating form of late, as demonstrated when he won the Bournemouth 10 at the end of February in 55 and a half minutes.

Once again, he was going for a quick time at the Bournemouth Bay Half Marathon and pretty much as soon as the race got underway, Steve found himself at the front of the field, blowing everyone else away with his amazing acceleration. 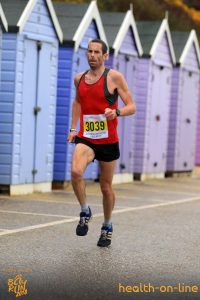 Although he’d been churning out the heavy mileage in training that week and for many weeks in the lead up, usually getting up to almost 120 miles, Steve still managed to find the strength to maintain his super quick early pace throughout the race.

That was essentially what pleased him most about his run. The consistency to keep banging out the 5:20 pace miles. It’s what he looks for most in his training.

It was always going to be a formality from the outset and, needless to say, Steve was first to the line, sealing another superb race win in a staggering time of 1 hour 10 minutes and 31 seconds. 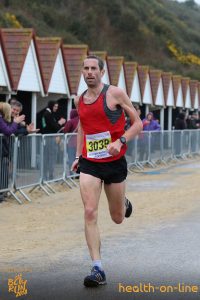 Steve ran a good consistently paced race to seal the win in a very impressive time of 1:10:31

Although he was pleased with the result, Steve had secretly been hoping for a sub 70 performance. It was difficult though with no one up there with him to race against and push him go as fast as he possibly could.

The run still bodes well for his form though going into the London Marathon and also for the Comrades Marathon in June, which is his primary focus of the year. 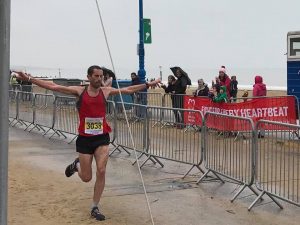 Steve wasn’t the only BAC member with a specific target in mind for the Bournemouth Bay Half Marathon. László Tóth was looking to complete the race in 1 hour and 20 minutes.

Dreaming of making the trip across the pond to take part in the New York Marathon, László knew that a 1 hour 21 minute time would be enough to see him qualify for the race. He wanted a bit of leeway though in case of any particularly tough miles toward the end of the race so sensibly decided to go all out for 1:20. 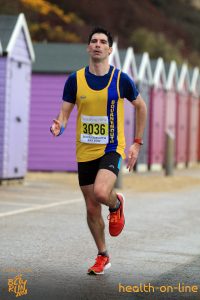 László Tóth was looking for a sub 1:20 finish to qualify for the New York Marathon

So the question was, could László achieve his target? And the answer – a resounding yes! He came up with the goods, running a phenomenal race to clock a magnificent new PB time of 1:19:53. This put him in 12th place on the day and, as one would expect, László was delighted with his performance.

All he needs to do now is save up the money and he could be heading out to New York, although he did say that getting enough readies for the trip out there could prove even harder that actually achieving the target time.

Last year in the Bournemouth  Bay Half Marathon, László registered a time of 1:20:44, so impressively he’d managed to top that by 51 seconds. 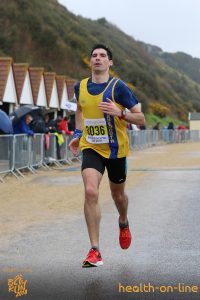 It was mission accomplished for László
as he took 12th place finishing in a time of 1:19:53

Another man who has his sights set on a super quick time at the London Marathon is Rob McTaggart. By contrast though, Tag wasn’t especially bothered about the Bournemouth Bay Half Marathon. He surmised that it was too close to London to be of any real benefit and thus could only be detrimental if he went out too hard.

As it turned out, the race didn’t go very well for Tag anyway. He woke up late that morning and only had breakfast 40 minutes before the race was due to start. He then got a terrible stitch about 2 miles in and as a result, decided to cut his losses and turn it into a reasonable pace 18.5 mile training run. 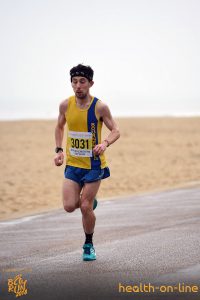 That ‘reasonable pace’ run as he called it, led Tag to a 1:20:57 finish and still put him in 14th position in the standings.

On the whole though, Tag’s marathon training has been going really well and he recently secured a huge new half marathon PB of 1:10:25 at the Big Half in London. He also finished a close 2nd to Steve at the Bournemouth 10 with a time of 55:48. 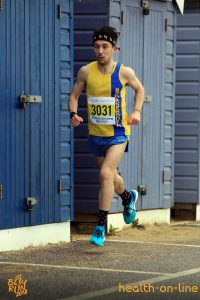 Coming in 23rd place, in a time of 1:23:33 was another recognisable face in the shape of Billy McGreevy. Billy is doing the ABP Southampton Marathon in a week’s time and this was his last long training run before that.

He ran 9 miles before taking to the start line for the Bournemouth Bay Half Marathon so it was a progressive long run for him in the end. 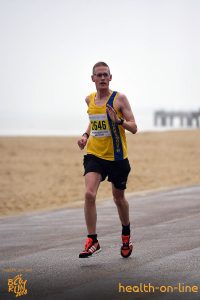 Ordinarily, Billy would have been doing the London Marathon but even though he had a qualifying time, having run a couple of sub 3 hour marathons last year, he forgot to register in time. He then decided to enter the Southampton one instead. 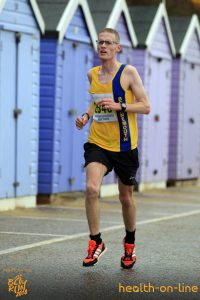 Even though he’d done 9 miles before the race started, Billy still completed the race in an excellent time of 1:23:33 which put him in 23rd place

Taking on what was essentially her first ever half marathon, except some random one she did many years ago before she joined BAC, Kirsty Drewitt was heading into uncharted waters.

She does have a burning desire to do some longer distance races though and is looking to work her way up the distance ladder. This year she did all three of the Imperial Series 10 races, so that was the Lytchett 10, the Bournemouth 10 and the Larmer 10.

Considering how tough some of those races were, particularly the Larmer 10, she was pretty much half marathon ready anyway after doing all those.

She had been lacking a bit of motivation for training though in the lead up to the Bournemouth Bay Half and had also picked up a niggling foot injury the week before. 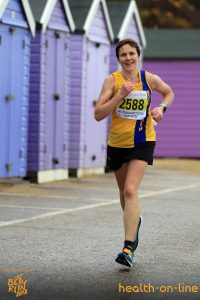 Despite that, she got her game face on and made it to the start line on the morning of the race. She had adjusted her expectations slightly, due to the lack of training and niggle she’d picked up but once the race got underway she actually felt really good.

The usual sea breeze we are familiar with along the promenade was absent and even though it was an overcast day, Kirsty felt like she was overheating.

Her foot injury started playing up on around the 8th mile so she didn’t push on too much from there and instead opted to cruise home. 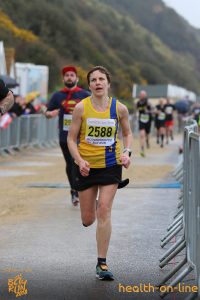 Understandably, Kirsty was thrilled with her time and was really pleased with how strong she felt throughout the race. There are certainly some good things to come from Kirsty and it will be interesting to see how she progresses in future longer distance races.

Despite competing in the Bournemouth Bay Half Marathon, Kirsty much prefers off-road running or cross-country to going up and down the promenade. Her go to place for training runs is often the Purbeck, which shows she has an affliction for the more adventurous kind of run.

Weighing in with a huge PB, registering a time that was over 5 minutes quicker than her previous best was Sam Laws. Sam’s mightily impressive effort of 1:58:01 put her in 491st place overall and she was 110th lady on the day. She also finished 17th in the F45 category. 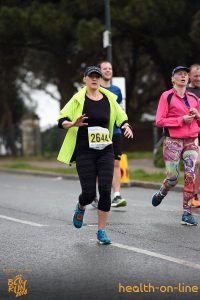 Sam Laws is currently training for the Southampton Marathon, which will be her first ever stab at the 26.2 mile distance

Sam’s previous best half marathon attempt of 2:03:59 was set at the Bournemouth Bay Run last year. These were promising signs for Sam as she enters the final stages of her training for the Southampton Marathon, which takes place on the same day as London.

Having really put the mileage in in training, Sam should have stood herself in good stead for what will be her very first marathon attempt. It was great to see signs that the hard work she’s been putting in is paying off and that her times are coming down. 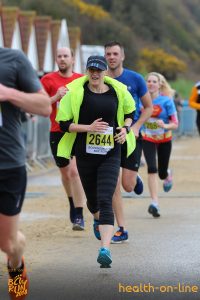 Henna Patterson, who sometimes trains with BAC on Tuesday and Thursday evenings, also ran the Bournemouth Bay Half Marathon. Her goal was to complete the race in under 1 hour and 50 minutes.

Henna duly accomplished her mission, crossing the line in a time of 1:49:56. That put her in 325th place overall and made her 52nd lady. She is currently training for a half iron-man and is looking to do the Bournemouth Marathon in October. 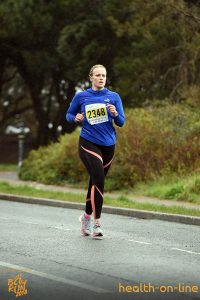 Henna Patterson sometimes trains with BAC on Tuesday and Thursday nights and was aiming for a sub 1:50 finish