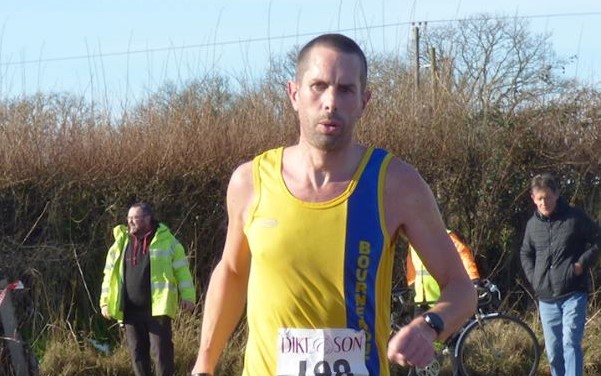 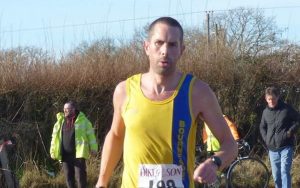 Going for his 7th win in the last 10 years, Steve Way returned to racing at the Blackmore Vale Half Marathon but he’d face stiff competition from BAC teammate and two-time winner Toby Chapman

For many Dorset athletes, the Blackmore Vale Half Marathon provides the first big test of the season as they embark upon their journeys toward whichever marathon or ultra races they’ve got lined up for the Spring.

It is an event that has been dominated by Bournemouth AC members over the years. In fact, Steve Way has won it six times in the last nine years, with Toby Chapman picking up the title on two other occasions, including last year where he just edged Steve out for the victory by one second.

In this year’s edition, both Steve and Toby were back to battle it out again. GB 100k hero Ant Clark was also in the line-up looking to kick-start his training for the Comrades Marathon in the summer, where he will compete alongside Steve.

Since it wasn’t a league race this time round though, Blackmore Vale didn’t attract quite so many Bournemouth AC members as it did last year. Jez Bragg and Adrian Townsend were both down to race but they were unfortunately ruled out through injury so Ian Graham was the only other representative from the club to take part. 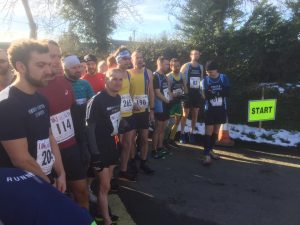 The star-studded start-line for the Blackmore Vale Half Marathon, included Toby, Steve and Ant Clark on the row behind in the red top

The cold weather we’ve been having recently did put pay to a number of races up and down the country, with conditions just too snowy or too icy to safely stage a race.

The Blackmore Vale Lions, who organise the event, did successfully manage to keep the race on though, although the course had to be adjusted to take out the hill you go down on the first mile and up on the last mile as it was simply too icy to run on.

Instead, the route started off on the road by the school, then went up to the main road and left down the other side of the field. Then it was straight up that road on the way back. Losing half a mile on the way out and half a mile of the way back meant that instead of being the full half marathon distance, it was only 12.1 miles on this occasion.

Everyone was happy with the change in course and most people in truth were just relieved that the race wasn’t cancelled. It was a beautiful sunny day that morning and the snow covered countryside provided a spectacular backdrop.

The route alteration didn’t stop Steve and Toby from assuming control of the race though and they soon built up a significant margin over the rest of the field.

It looked like it was destined to be another close one between the pair and they were still together at the 10 mile point. On the final set of hills though, Steve began to drift away from Toby and that proved to be decisive. 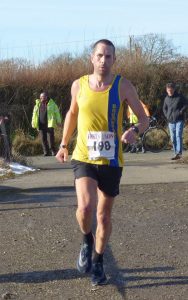 Steve went on to add another victory to his impressive tally, crossing the line in a time of 1:08:32. Toby arrived 28 seconds later to take the runner up spot in 1 hour 9 minutes exactly, so it was a role-reversal of the result last year.

The dynamic duo were way ahead of anyone else in the field, with Mark Smith of Poole AC coming in five minutes later at 1:14:11 to take 3rd place. John Towner of Poole Runners was 4th with a time of 1:15:24, with Peter Dimbleby of Birchfield Harriers taking 5th place in 1:15:58.

Steve’s average pace for the run was 5:38 minutes per mile which was pretty much the same pace as he did in the race last year, so if it had had the additional mile, he would have probably finished it in just over 1:14 again. 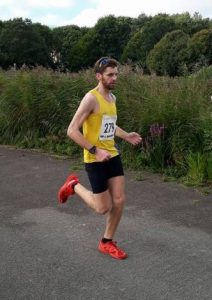 That’s a good sign for Steve as, although he didn’t feel great during the run, it means he’s in a similar to shape to what he was at this stage last year, after which of course, he went on to achieve big things at the Comrades Marathon. Next up for Steve it’s the Lytchett 10 this coming Sunday, which is the second Dorset Road Race League fixture of the season.

As for Toby, he thoroughly enjoyed the run and said it felt good to be out there racing again. He’s now building up to the Highland Fling in April and the Laverado in the summer – a 120km trail ultra in Italy with over 5,800m of ascent.

Managing a highly impressive negative split, Ian Graham had an excellent run. He was picking off adversaries one-by-one throughout the race, which is always satisfying.

Finishing in 96th place with a time of 1:38:57, Ian was 2nd over 70 behind David Cartwright of Poole Runners who clocked a staggering time of 1:23:40. The Blackmore Vale Half Marathon is a race that Ian really enjoys so he was pleased to be out there giving his all. 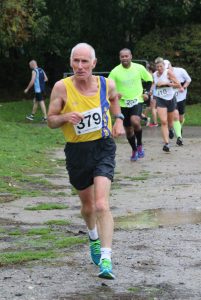 Unfortunately it wasn’t such a happy ending for Ant Clark as he pulled out at the 10 mile point. Ant has been suffering from a hamstring injury recently which has been preventing him from running as hard as he otherwise would.

After experiencing some pain from that he decided to take the sensible option and abandon before he did any serious damage. He’ll now be spending most of this week in rehab hoping that he can make a full recovery and resume a full training programme next as of next week. 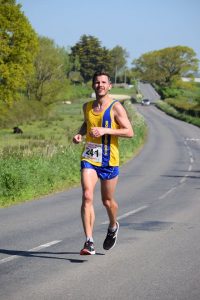 In the women’s race, it was Rachel Astington of Running for Time who sealed the victory, crossing the line in 1:20:24, which put her in 20th place in the overall standings. 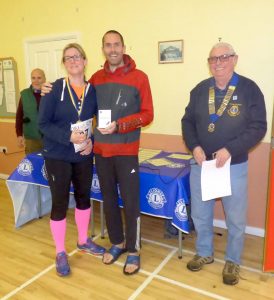