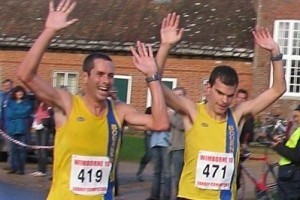 It’s well worth having a look at Steve Way‘s website www.steveway.co.uk to see his account of a remarkable run in the 100k World Championships at Doha, Qatar on 21 November 2014. Steve‘s preparations for the race hadn’t been quite as he’d wished, with injury and Man Flu in the preceding weeks, but, on the start line all seemed to be well. Things continued well for the first part of the race with Steve maintaining exactly the planned pace, ignoring those athletes who chose to set off at something like a sprint. However, approaching 24k, stomach problems led to a portaloo visit, meaning slowing down and losing time. Hopefully, this wouldn’t be repeated, but it wasn’t to be, with the next 50k or so, no less, turning into a portaloo to portaloo race, some of them reached just in time. Things improved at about 75k, but Steve describes that middle 50k as his “darkest running hours”, at times with thoughts such as “I can’t do this”. With all this, it really is a tribute to Steve that he kept going, when many would have withdrawn, and he was rewarded, not only with a 13th position in 6.57.23, but a team bronze medal, Steve finishing second of the GB team.  This was a multi-lap race, which meant that Steve‘s wife, Sarah, whose tremendous support Steve acknowledges in his blog, was able to encourage him continuously throughout the race (despite the fact this was at night!), which must have been the support he needed to keep going.  The winning time was 6.27.43, and it’s worth remembering that Steve has run a 6.19.20 100k, and, so far as we know, remains the fastest man on the planet at this moment over the distance.  Although this wasn’t quite the result Steve had hoped for, it’s great to read that he is in no way discouraged, planning to run next year’s London Marathon (with all the training benefits that will bring to local athletes in their winter training) and, of course, the Comrades’ Marathon in South Africa later in the year.  The 100k World Championships may not have been everything Steve had hoped for, but the rest of us can only admire the strength of character which most of us can only imagine.  Amazing! 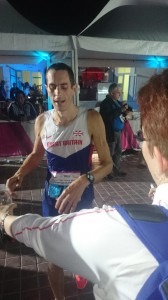 Steve Way is welcomed by his wife, Sarah, after the “hardest 7 hours” of his life

It’s also worth remembering that we have another current international athlete in our midst, namely Jon Sharkey, who was part of the winning England team (which also included Steve) in the Anglo-Celtic International Plate (also a 100k race) at Gravesend on 3 May.  Looking for a challenge after resting following his debut Ironman, and inspired by Steve, Jon decided to seek qualification for the Plate by running, without any proper preparation, in a 50k race in Newcastle.  He succeeded by running the most disciplined race imaginable, finishing, as planned, in 3.19, 3 minutes short of the qualifying time.  Having, as a result, been selected to represent England in the Plate, Jon ran an incredible inaugural 100k to finish a remarkable 6th, with the result that England were the winners. 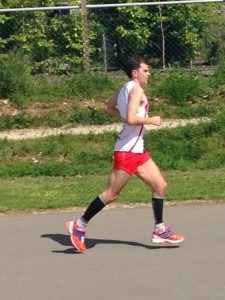 Jon Sharkey competes for his country

How many clubs, apart from the top, almost ‘professional’, clubs can claim not one, but two, international athletes?  We should be, and are, very proud of Steve and Jon.